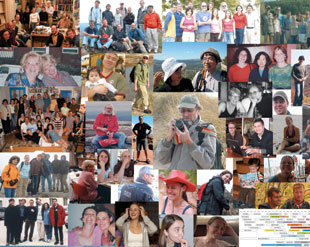 LAB FUN: Jon Beckwith is pictured with his camera in the middle of a collage of his lab members enjoying hikes, beach days, and more.COURTESY OF MEHMET BERKMENWhen Mehmet Berkmen was accepted to Jon Beckwith’s bacterial genetics lab at Harvard as a postdoctoral scholar in 2000, others joked that he was about to join a mafia. Berkmen, who was getting his PhD from the University of Vienna but doing most of his research at the University of Houston, was alarmed. He knew that Beckwith had been part of the team that, in 1969, was the first to isolate a bacterial gene, lacZ, from an intact chromosome, and that his lab had continued to turn out seminal research on topics including gene expression regulation, protein secretion, and disulfide bonds. He imagined Beckwith marshaling regimented phalanxes of postdocs as they crisply turned out results and dominated the field....

But Beckwith turned out to be humble and shy. And despite its famous productivity, the lab was such a warm, friendly place that, according to Berkmen, now a staff scientist at New England Biolabs, members cry when they have to leave, and they get together every three years for reunions that draw people who weren’t even members of the lab. The term “mafia,” it turned out, was a term of endearment used among lab members. Far from being a pejorative, it just “means that we are very, very connected,” says Jennifer Leeds, who was a postdoc in the lab between 1996 and 2001 and is now head of antibacterial discovery at Novartis. “We are a family.”

The strong ties and shared values fostered in a tight-knit lab like Beckwith’s can help make the difference between a highly successful career and a lackluster one—both for the lab’s principal investigator and for its members. Loyal, nurtured young scientists will be productive and will recommend the lab to other high achievers. They, in turn, leave the lab with an instant clan of researchers who can help them with anything, from solving experimental problems to finding new collaborators.

But not every principal investigator succeeds in forming this type of influential, inclusive community. The Scientist spoke to members of two tight-knit labs to try to pinpoint the factors that led to their becoming such congenial, nurturing places.

Harvard Medical School, Department of Microbiology and Immunology
Around one hundred postdoctoral scholars and graduate students have passed through his doors since Beckwith came to Harvard as a young professor in 1965. They have repeatedly turned out field-defining research on basic bacterial biology. Beckwith began with his work on the lac operon, followed by discoveries on how to identify amino acid sequences that destine proteins for secretion and on how to predict the arrangement of proteins within a membrane. By the 1980s he had become fascinated with the disulfide bonds in bacterial periplasmic proteins, which have been pursued as antibiotic targets, and in 1991 his lab discovered an enzyme responsible for forming those bonds.

Perhaps more extraordinary than the lab’s contributions to microbial biology is the strength of the relationships between lab members. Beckwith’s legendary reunions, which have been going on since 1996, are mini-conferences for bacterial geneticists, and the lab’s e-mail list, which includes both past and present lab members, buzzes with questions and advice. All this sharing happens even though many of the lab’s former members are now competing with each other professionally. Leeds and another alumna are running parallel clinical trials at different companies, and they still have meals together and talk (while steering clear of confidential information).

Despite his lab’s present-day cohesion, when he first got to Harvard Beckwith was terribly shy and wasn’t certain he had chosen the right path. Although he’s not sure how his lab became so tight-knit, he thinks the dance parties he started throwing at his house in the late 1960s may have helped. Beckwith also became passionate about activism during this time, voicing his concerns about scientists’ and doctors’ potential misuse of genetic manipulation and testing, among other topics. “I think I progressively shared more over the years with people,” he says. The atmosphere in the late ’60s and early ’70s “really loosened me up.”

Graduates of his lab, however, say it was more than that. “He constantly questions himself,” says Leeds. This self-critical nature seems to relax those around him and spur them to think critically about themselves and their own work. And the rigorous but respectful intellectual atmosphere fostered by Beckwith, more than anything, is what allows lab members to have stimulating conversations wherever they meet. 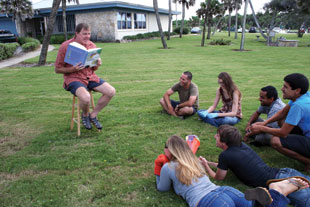 STORY TIME: On the lawn of the University of Florida’s Whitney Lab, Mark Q. Martindale reads to his lab members about embryonic development.COURTESY OF JESSICA LONGThe Whitney Laboratory for Marine Bioscience, University of Florida; formerly of Kewalo Marine Laboratory, University of Hawaii at Manoa
In Mark Q. Martindale’s evolution and developmental biology lab, members are always looking over each other’s shoulders and into each other’s microscopes at developing embryos. “That’s not [the case] in every lab,” says David Q. Matus, a graduate student and then a postdoctoral scholar in the lab between 2000 and 2007. He’s now a postdoc at Duke University and soon to be an assistant professor at Stony Brook University.

Martindale traces the warmth, fun, and focus of his lab back to his undergraduate years and his own academic lineage. When he went to his first scientific conference as a sophomore, one of his friends put Qs, Xs, and Zs as their group’s middle initials on the sign-up sheet as a joke. The Qs stuck, and now Martindale and several of his friends publish using Qs as middle initials and are passing the tradition on to their own students—anyone who comes to the lab is allowed to adopt the new letter, although not all choose to do so.

One of Martindale’s current postdoctoral scholars, Michael Layden, who did not take the Q, credits the lab’s nonhierarchical structure, diverse research topics, and Martindale’s enthusiasm for the lab’s openness. “Lab meetings can take you from characterizing these weird species to a hard-core functional molecular approach, to looking at extracellular matrices,” he says. The diversity of projects takes away some of the pressure of competition.

Because of the unique shared middle initial, even the lab members who do not “take the Q” see their lineage as a wider community. “I think it inadvertently has sort of created this immediate bond,” says Layden, who recalls running into a Q at a conference and immediately being able to strike up a conversation.

Tips on Building Your Own Lab Family:

Catch them while they’re relaxed. PIs are told to interact with their lab members, but limiting contact to formal meetings can be intimidating. Jon Beckwith’s office was, until a recent relocation, connected to his lab, and he only closed the door when he was having a meeting or taking a nap. “I feel like the kind of science we do is puzzle-solving,” he says, “and coming up with good ideas is a constant need. I have to shoot the breeze for a while to really talk about the ideas.” Martindale, meanwhile, has a knack for injecting embryos, so he likes to sometimes have these chats at the lab bench while helping to guide the process. “We sit in a dark room injecting embryos, we put on some music, we talk about their work, how they’re interacting, what their priorities are,” he says.

Be respectfully critical. Science is based on criticism and revision of ideas, and yet, in a competitive setting, questioning a lab member can be perceived as an attack. The Beckwith Lab meetings famously cultivate an atmosphere of respectful questioning. “It was very much an open and transparent and relatively unstructured scientific debate,” former postdoc Leeds says. “The only rule was that you be respectful.” Beckwith’s students think that he is able to be so critical in part because he questions himself so constantly that it is impossible to feel singled out.

Create rituals. Beckwith loves to throw dance parties at his home, so some of his current and former lab members presented him with a disco ball for his 65th birthday. Annual celebrations include Beckwith Beach Day, a lab hike, and his famous Christmas party. Beckwith’s lab refrigerator is adorned with photographs from the annual hike over the years. “You see yourself there in a photo with all those other people,” some of them very well-known in the field, and you know you’ve arrived, says Berkmen. Martindale’s former graduate student Matus says that the bar across the street from the Kewalo Lab in Hawaii was a major hub of lab life, and all victories were celebrated and failures shared over drinks. “I’ve tried to foster that in my postdoc lab I’m in now, and I think these things are recipes for making things more tight-knit,” he says.

Be flexible. Beckwith has always been laissez-faire about the nonscientific contents of his lab. Members credit video games and ample sporting equipment with helping them relax and possibly work longer and harder in the end. And the lab welcomes members’ families. Mere hours after Leeds gave birth to her son at nearby Brigham and Women’s Hospital, Beckwith and at least a dozen others crowded into her hospital room. Later, lab members would play with the child on the Harvard Medical School lawn while Leeds did experiments. “When he was born it was like, he’s already part of the lab,” she says.

How to pick lab members:

Get to know candidates. The key to a fun, productive lab is choosing the right lab members—and yet, according to Beckwith, it’s not as simple as selecting the candidate with the most published papers or the best grades. Instead, he likes to pick students he can enjoy conversing with and who show curiosity. “I don’t judge people on how committed they are, how hard they work,” says Beckwith. An ability to ask questions and be self-critical and a desire to collaborate are valued more highly.

Canvass the lowest-ranking lab members. Ask undergraduates, not just grad students and postdocs, what they think of candidates, Martindale says. You want someone who will get along with and respect everyone, regardless of status or seniority. A candidate who has an unpleasant side is more likely to show it to people perceived to be lowest in the hierarchy.

How to Pick a lab:

Look for the quirky. Unorthodox approaches can be a sign of a creative lab with a PI who is unafraid to take risks. Leeds was in part inspired to apply to the Beckwith lab after going to a meeting at Cold Spring Harbor Laboratory, where she came upon one of Beckwith’s lab members doing an odd poster presentation. “He had taken blank pieces of paper and thumbtacked them onto [his poster board], and he started drawing while I was talking,” she says. “I was like, wow, this is science in the moment. This is not prebaked and rehearsed and made to look pretty and digested and spit out in a way that was all for show.”

Further considerations. Does the PI micromanage students? Does the PI try to compete with his or her students? Does the PI pit students against each other, making them compete for attention? Do the lab members like to spend time together? These are all questions that current students and postdocs can answer. For Leeds it comes down to this question: “Do they want you in the lab because they have a grant they need data for? Or is it because they see you as an integral part of their existence?” 