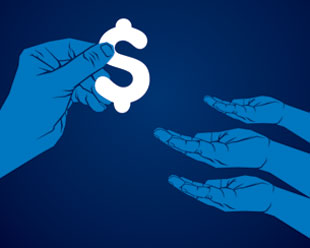 © ISTOCK.COM/VECTORAARTA few years ago, David Sinclair’s lab was slipping through his fingers. With grant money running dry and the outlook for overall federal research budgets bleak, the Harvard geneticist was losing lab members because he couldn’t support them with funding from the National Institutes of Health (NIH), as he had done in years past. Sinclair says his 18-person-strong group dwindled to just four or five people. “And that was painful,” he recalls. “I had to let people go for lack of money.”

And Sinclair says he’s not alone. “Even at a place like Harvard, I know [other] labs that have downsized dramatically and even closed down,” he says. “So it’s hit across the board.”

In the face of such persistent financial stress, Sinclair was forced to reconsider his funding strategy. Rather than try to secure a few generous, but highly competitive, NIH grants, he began applying for...

Many other scientists are similarly seeking private, rather than public, funding sources, as the federal budgetary sequestration extends into its second year and government research budgets show no signs of rebounding any time soon. Nir Barzilai, director of the Institute for Aging Research at Albert Einstein College of Medicine, used private money not only to fund his own lab, but to launch an entire research center. He and collaborators opened Einstein’s Paul F. Glenn Center for the Biology of Human Aging in 2012 with the help of a $3 million grant from the Glenn Foundation for Medical Research, and funding from private sources continues to fuel research at the center. “For me personally, the NIH hardships, I survived them,” Barzilai says. “When I hear of any private source, it’s immediately an e-mail to the people at the Center. . . . I probably have as much funding as I had before.”

The recent success of the biotech financial markets, with an unprecedented number of IPOs, has really brought a lot of money into the hands of younger companies that are focused on new biology, and are now valid sources of fund­ing.

The Scientist spoke to researchers using private funding to make ends meet and learned some of the tricks to finding and securing grant money even in these hard times.

Numerous charitable foundations award small or medium-size research grants, usually in the range of $100,000 to $300,000, to scientists working on biological phenomena relevant to particular diseases or disorders. Sinclair has been able to secure funding from several philanthropic organizations—including the Glenn Foundation for Medical Research, the Juvenile Diabetes Research Foundation, and the United Mitochondrial Disease Foundation—as well as grants from Harvard that are meant to accelerate commercialization, and even gifts from private families, for work on diseases that involve mitochondrial malfunction. A bevy of charitable grants like these, though individually not often as robust as R01s from the NIH, can sustain a lab full of grad students, postdocs, and researchers.

Evris Gavathiotis, a biochemist at Albert Einstein College of Medicine, has even used private foundation funding as a means to gather data that he can then use to write more-compelling NIH grant proposals. As a new faculty member in 2011, he knew he would need an R01 grant from the NIH to get his lab up and running. But his October 2012 proposal on a novel pharmacological strategy to induce apoptosis in cancer cells was rejected because experimental evidence supporting the approach was lacking. So Gavathiotis sought private funding to support the preliminary experiments. In 2013, he won a $200,000, two-year grant from the Sidney Kimmel Foundation to do in vivo toxicity experiments to show that his small-molecule approach to targeting BAX proteins was worthy of further investigation. When he resubmitted his R01 proposal later in 2013, it was accepted, and he was awarded the grant last year.

“We want to get NIH funding; it gives sustained funding to the lab,” Gavathiotis says. “[But foundation grants] help you fill the gaps if you don’t have an R01 or help you build up your research program to get to the point where you would be competitive for an R01.”

Just after getting his R01 grant last summer, Gavathiotis got another charitable grant, this time from the Michael J. Fox Foundation, which injected $165,000 into a project to discover drugs for Parkinson’s disease. Gavathiotis says that he plans on submitting proposals for at least two more R01s, but in the meantime, he will continue to apply for private grants as well. “It will give us some additional funding to finish these projects and get some more papers out,” he says. “Eventually the R01s will come.”

Relying on private funding to propel your research can, however, mean adjusting the goals of your work, notes Harvard’s Sinclair. “We do have more of a translational focus in general,” he says. “We’re not as free to do what we want to do as we used to be.”

Gavathiotis agrees. “There are not many foundations where you can get a grant on something where there’s no application. That’s how they work.”

Another source of private funding—one that necessitates even more of a translational approach—is the biotech and pharmaceutical industry. Sinclair’s group is working with pharmaceutical company Novo Nordisk, for example, searching for therapeutic proteins to treat type 2 diabetes. That collaboration alone has provided two years of funding and supported one postdoc in his lab, says Sinclair, who adds that his lab and the company recently extended the project.

Rather than simply partner with industry, Barzilai decided to join it, cofounding a biotech company with Sinclair and others as a way to generate money for basic research. In 2011, Barzilai, Sinclair, and a couple of colleagues launched CohBar, which is focused on the discovery and development of novel mitochondrial-derived peptides to treat disease and extend healthy life span. According to Barzilai, CohBar has raised about $17 million in the past year—$5.7 million in private funding and $11.25 million through an initial public offering (IPO) on the Toronto Venture Exchange this January. He adds that the firm is even able to outsource some of its R&D to academic researchers.

Seeking out private funding has been the saving grace for many labs, especially Sinclair’s. The total funding makeup of his lab, which now supports 22 people, is about 75 percent private and 25 percent federal. This includes just one NIH R01 grant, two projects that involve industry collaborations, funding from foundations, and a grant from Harvard’s Blavatnik Biomedical Accelerator. In addition to keeping his lab open in the face of economic hardships on the federal level, Sinclair notes another benefit: “I’ve spent much less time in the last two years writing NIH grants.” Plus, because his lab is primarily supported by private funding, Sinclair also spends much less time on administrative tasks, such as reporting and documentation, whereas NIH grants typically bring with them a heavy administrative burden.

Going the private-funding route may mean thinking of your research in more of a translational sense. But that doesn’t have to be a negative, says Michal Preminger, executive director of the Harvard University Office of Technology Development. Preminger’s office aids in translating Harvard research into commercial products. And that means she spends most of her time playing matchmaker between academic labs and biotech firms or investors interested in a particular field of research. Preminger says that her office has helped increase the amount of industry dollars going into Harvard labs four- or fivefold in the past three years.

Even without the federal research budget squeeze that academic scientists have witnessed in the past few years, Preminger says, life science was ripe for the flow of private funding into basic science labs via industry and venture capital investments. “The recent success of the biotech financial markets, with an unprecedented number of IPOs, has really brought a lot of money into the hands of younger companies that are focused on new biology, and are now valid sources of funding,” even for academics, she says. “This is not really related to the need. It just happens to be the case that the life sciences have been able to deliver very interesting breakthroughs and innovation that have fueled the industry and raised the appetite for more.”

In addition to attracting private funding, shifting the focus of a basic-research program to include thinking about applications of the biology under study can also reinvigorate the work itself, Preminger adds. “Sometimes federal funding makes [researchers] very comfortable in a basic-research domain, and so the ability to venture out of that and look at more translational work is, on the one hand, important if you’re going to raise alternative sources of funding, but it also becomes a goal in its own right, once they’re exposed.”

Barzilai agrees. “[Starting CohBar] created the opportunity to take some of our most promising research and get it out there so it could do good for the public.”

Viewed in that light, the federal funding crunch can actually be considered a positive motivating factor for many basic researchers, Preminger suggests. “In many ways this is the silver lining of the NIH budget crises: more interaction between the real world and the academic lab these days.” 