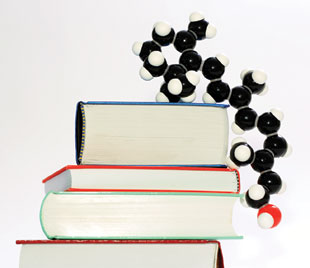 © SHUNYU FAN/ISTOCKPHOTO.COMThe days of publishing a paper based on the cloning and sequencing of a single gene are long past. Now, the life sciences are dominated by increasingly bigger data sets, generated by high-throughput sequencing and large-scale proteomic screens. Interpreting such an abundance of information is a challenge for researchers with minimal computational training, spawning many successful collaborations among biologists, computer scientists, and mathematicians. But those with training in more than one of these fields are at a growing advantage in this interdisciplinary era, and faculty from disparate departments are joining forces to ensure that the next generation of scientists is appropriately prepared.

“We believe the traditional training programs either for math or biology are not sufficient to produce the type of students that can best work in the areas of mathematical, computational, and physical biology,” says Qing Nie, who helped launch the mathematical and computational biology...

“Biology on the whole is becoming more and more quantitative, and not just from the big-data point of view in terms of genomics, but also in terms of the types of precise measurements that people are doing in the biological world,” agrees Daniel Zuckerman, associate director of a joint program in computational biology between the University of Pittsburgh (Pitt) and Carnegie Mellon University (CMU), launched in 2005.

The first programs to merge more quantitative fields with traditional biology training were launched nearly 10 years ago. In 2004, MIT and Harvard each began graduate programs in systems biology, inviting students with backgrounds in both biological and computational disciplines to methodically examine how biological systems operate at all levels of complexity. Since then, dozens of institutions have followed suit. Most recently, Rice University welcomed seven students to Texas last fall as the first class of a new program focused on systems, synthetic, and physical biology. The goal of all of these new programs is to expose young researchers to both the biological fundamentals and the mathematical, computer science, and engineering skills that can inform a more quantitative study of biology, as well as to help them overcome the barriers that have traditionally divided scientific disciplines.

“One of the most important things we’re learning here is how to communicate with people whose expertise is different from our own,” says third-year CMU-Pitt grad student Kristina Buschur, who double-majored in math and molecular biology in college.

Here, The Scientist speaks with students, faculty, and administrators in programs that combine the best parts of multiple fields to educate burgeoning scientists for biology’s computational future. 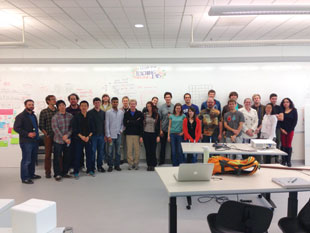 DIVERSITY IN SCHOOL: The Integrative Program in Quantitative Biology at the University of California, San Francisco, brings together students trained in computational fields with fledgling biologists.COURTESY OF JOSEPH DERISI 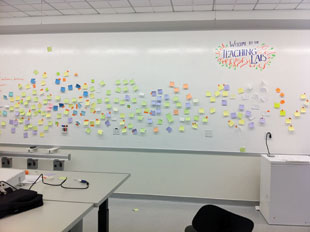 IDEA BOARD: Post-it notes containing the students’ experimental and computational ideas for attacking a theoretical challenge in quantitative biology. The notes are clustered together by similarity and theme, to give an overall map of concepts.COURTESY OF JOSEPH DERISIIn 2002, Nie, a professor of mathematics and biomedical engineering, and UCI colleague Arthur Lander, a biomedical engineer and professor of cell and developmental biology, were working together to study the diffusion of patterning factors called morphogens during animal development when they realized that “any long-term success in research and any institutionalized effort in this area of systems biology needed a good education program,” Nie says. The duo was inspired to expand interdisciplinary science at UCI, and after almost five years of planning, the MCB program was born.

The program is currently a one-year gateway, in which students take required core classes within the program during their first year and then join their chosen research mentor’s home department. But due to student requests for a more complete, degree-awarding program, the UCI faculty is now in the process of developing a stand-alone PhD program in mathematical, computational, and systems biology.

At the University of California, San Francisco (UCSF), researchers have been enthusiastic about cross-disciplinary graduate training for at least 15 years. “The departmental boundaries and structures that have previously dominated graduate education are becoming archaic,” says UCSF molecular biologist and biochemist Joe DeRisi. Even before DeRisi came to UCSF in 1999, most of the university’s scientific graduate programs were purely nondepartmental, meaning students join and receive their degrees from programs that span multiple departments. Structuring graduate education in this way “really lends itself toward interdisciplinary training,” he says. So it was no great leap for DeRisi and others to introduce the complex-systems-biology emphasis into UCSF’s quantitative biology graduate program in 2007.

But starting a new graduate program of any kind, never mind one that requires the involvement of a number of diverse researchers, is not easy. Faculty from different departments tend to have dissimilar ideas about what a qualifying exam should encompass, for example, or the sorts of courses that PhD students should take. And beyond the time and input needed to create the curriculum, which usually involves the development of original course material, getting approval for new academic programs from university administrators can take months or years. “It was a huge amount of bureaucratic and scientific and political negotiating to get the program started,” Zuckerman recalls of the launch of the CMU-Pitt program in computational biology.

But the faculty members behind these programs all agree that the challenges inherent in starting a program can’t compare to those faced by a young biologist entering today’s competitive field with little or no computational training. “One of the problems with biology training is that it isn’t quantitative enough,” says Eric Sobie, codirector of the systems biology program at the Icahn School of Medicine at Mount Sinai in New York City. The program launched in 2007, thanks to a National Institutes of Health grant, and focuses on the systems biology of disease and therapeutics. Students combine classes in biomedical modeling with laboratory work to illuminate the interconnected aspects of disorders.

Other new interdisciplinary programs are structured in similar ways. Molecular biology courses are taught alongside programming and biophysics classes, while faculty members from many departments mentor students to ensure that they get the most effective training. “It’s absolutely true that our students engage in very interdisciplinary projects,” says UCSF’s DeRisi. “A person that came in really just being a codehead—a computer scientist—now would be purifying the protein themselves, crystallizing it, and writing new code to analyze the results.” 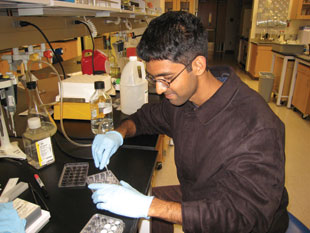 LAB FUN: Philip Thomas, a graduate student in the University of California, Irvine, Mathematical and Computational Biology Graduate Program, prepares nematode samples for analysis.COURTESY OF FELIX GRUN, CENTER FOR COMPLEX BIOLOGICAL SYSTEMSStudents entering interdisciplinary programs rarely come in with the same academic background. In UCI’s mathematical and computational biology program, the incoming grad students are split fairly evenly—about a third of them have a background in math or physics, a third in engineering, and a third in biology. In Mount Sinai’s systems biology program, about 65 percent of entering students having been trained in biology, while the remaining students are from quantitative disciplines, such as biomedical engineering, math, or physics. The incoming classes at UCSF’s quantitative biology program, in contrast, are usually heavy on students with computational training, with a few biologists sprinkled in.

Such diversity can be a boon to education and research, says MD/PhD student Jason Cook, who recently earned his PhD from Mount Sinai. Cook studies Marfan syndrome, a genetic disorder of the connective tissue, and as with any complex disease, he says, it’s not particularly helpful to look at a single mutation without considering the protein’s interactions with the hundreds of other molecules in its environment. Working in an interdisciplinary program has allowed Cook, who majored in biology as an undergrad, to collaborate with computer programmers to efficiently screen for Food and Drug Administration-approved drugs that might be useful in treating the disorder.

Diversity can also be a challenge, notes DeRisi, particularly when it comes to communication. “The physicists may never have done any bench work; the biologists may never have written their own programs,” he says. “We know that they’re not going to be really using the same language to speak about life sciences when they get here.”

To help put students from diverse backgrounds on a level playing field, programs often start with a two- to three-week boot camp prior to the first academic year. Boot camps can include quantitative preparations, like MatLab and Mathematica workshops and shotgun courses in differential equations, as well as lecture-hall and wet-lab training in genetics, protein engineering, synthetic biology, and bioinformatics. More-advanced graduate students often assist with the training, reinforcing their own interdisciplinary educations.

After boot camp, first-year UCSF students participate in a hands-on learning course called dynamical systems. In a laboratory built specifically for the course, the class is divided into groups of students with diverse backgrounds. “The goal is that these teams that come out of this experience are not only bonded tightly together,” says DeRisi, “but they have also become simultaneously conversant in the multiple languages of biology, physics, engineering, and computer science.”

According to students, the hybrid programs are meeting these goals with flying colors. “One of the biggest and the best takeaways from this program is the ability to communicate across disciplines,” says UCI third-year student Alyssa Kent, who studied math as an undergraduate. “I know how to talk to a biologist and get the resources that I might need in my research.”

Out of the nest

For the programs that have been around long enough to see their first graduates enter the post-PhD research world, the interdisciplinary training seems to be serving them well. Based on his training at Mount Sinai, Cook says the systems biology program has given him “an understanding of how you refine all of this amazing data that you get to make sense out of a problem,” which will serve as “a foundation for all of our future work.”

The combination of computational and biological skills can also be a boon for job-hunting. From the CMU-Pitt program, about half of the students pursue an academic track and half go to industry, mostly biotech. And for those who choose to stay in academia, says Tim Mitchison, codirector of Harvard’s systems biology program, cross-disciplinary training will position them well to join any of the growing number of systems biology programs. “If you want to be on the professor track?. . . it’s hard to think of anything better in biology,” he says.

Even the Harvard program’s dropouts—fewer than 10 percent of students who join—“immediately get a job,” Mitchison adds. “The emphasis on computer literacy just gives people a lot of backups.”

DeRisi agrees. “In this day and age of the competitive funding environment, students that possess these multiple skill sets are incredibly marketable.”