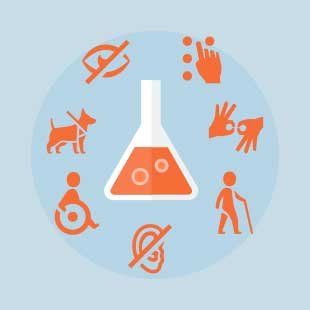 ADAPTED FROM ISTOCK.COM/GREYJA few years ago, the University of Delaware’s Karl Booksh realized he was the only tenured chemist that he knew of at a top-tier research university who had gone through all of his scientific training, from college onward, with a disability—in his case, paraplegia in his legs and limited use of his hands and arms. This made him wonder: Where were all the scientists with disabilities?

A statistics-oriented person, Booksh scoured data going back to the mid-1980s on the numbers of PhD-level scientists in the U.S. who were living with disabilities. According to one report from the National Science Foundation (NSF), in 2013 about one in nine scientists and engineers under the age of 75 identified as having a disability, not far from the national rate of about 12 percent. But for more than half of those scientists, the onset of disability occurred after the age of...

Booksh has teamed up with University of Delaware biochemist Sharon Rozovsky to run an NSF-funded Research Experiences for Undergraduates (REU) program specifically for students with disabilities. Once a week for the past three summers, students with diverse disabilities, from mental health conditions and learning disabilities—such as autism spectrum disorder and severe obsessive-compulsive disorder—to physical disabilities, such as deafness and blindness, have gathered to devise strategies for success. They discussed when to disclose disabilities to potential employers, how to identify specific needs and request accommodations, and ways to overcome preconceived ideas about what someone with a disability can or can’t do.

Twenty-five years after the passage of the Americans with Disabilities Act, there are still hurdles for scientists with disabilities, but there are also resources available to these researchers to adapt their labs and offices and to improve accessibility for future generations. The Scientist spoke with a handful of these individuals.

For Oregon Health and Science University (OHSU) biologist John Brigande, who has suffered from progressive hearing loss since age nine, the key to success in science was finding the right lab. After about a year as a postdoc at the University of Texas at Austin, Brigande says his hearing loss had gotten so bad that he was forced to take it into consideration when making career decisions. “If I was going to be able to realize this dream of a career in science, I needed to find a training environment that could support my hearing loss most effectively.”

Brigande accepted a postdoc position in the Purdue University lab of Donna Fekete, who studies inner ear development. Fekete had been a member of Brigande’s doctoral thesis committee at Boston University, so he knew she was sensitive to the needs of students with disabilities. He also found Purdue to be “incredibly proactive,” he says. “From the moment I stepped into the lab, I had assistive listening technology that helped me communicate with lab members.”

When writing letters and things, don’t disclose your disability on page one. Page one should be about what you’ve accomplished.—Karl Booksh,
University of Delaware

Brigande says even his choice of field was strategic. “If any scientific meeting on the planet might have captioning during the presentations so that I could read what was being said . . . it should be the Association for Research in Otolaryngology.”

Richard Mankin, an entomologist with the US Department of Agriculture and current president of the Foundation for Science and Disability, was also strategic in choosing a research path that would suit his physical abilities. Mankin was born with arthrogryposis, a condition that causes the muscles to shorten and limits joint flexibility. “I didn’t pick a field where I had to go mountain climbing,” he says. His research does involve some fieldwork, but, “I’m mostly just walking around in citrus groves or other things that I can do . . . without a lot of accommodation,” he says.

To disclose or not 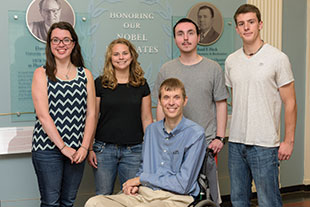 EARLY START: In 2013, the University of Delaware’s Karl Booksh (middle) launched a Research Experiences for Undergraduates (REU) program designed to help students with disabilities prepare for a career in science.EVAN KRAPE, UNIVERSITY OF DELAWAREMany researchers with disabilities acquired their limitations after their careers were already underway. Booksh was a freshman in college when a neck injury he sustained during a flag football game caused him to lose the use of his legs and some use of his arms and hands. Fortuitously, he was already doing chemistry research by that time, and he credits that line of study with keeping in him school after his injury. Although he could no longer do bench work efficiently, he could still design experiments and analyze data, so he focused on data-driven projects for the rest of college and through graduate school.

Things got harder for Booksh as he began applying for jobs after earning his PhD. Potential employers would ask him, “How can someone in a wheelchair do chemistry?” he recalls. “I had to keep pointing out that the most successful faculty didn’t know where the pipettes were in the lab.”

Booksh says he often felt he needed to prove he could be as successful as any other scientist without asking for extra or resources. “I had to go about things by completely denying that I had a disability and by doing as much as I could, asking for no accommodation.” For example, he delayed adopting voice recognition software to help him write faster, and instead took to working extra long hours.  As a mentor he now realizes “that attitude is not healthy [long-term].”

Instead, he encourages his students to be up front with potential employers about their particular needs. “I’ve told the students, whatever they do, don’t do what I did.” But, he adds, “when writing letters and things, don’t disclose on page one. Page one should be about what you’ve accomplished. [That] puts the person out there primarily as a darn good scientist who happens to have done all of this while having a disability.”

It’s also important to disclose your limitations in the lab, Brigande says. Some people will go out of their way to accommodate you once they know; others will simply avoid you, he says. “I respect both approaches.”

Bill Jacobs, a microbiologist at Albert Einstein College of Medicine in New York with progressive vision loss, says he was never afraid to ask for help from his colleagues. Three years ago, he asked his institution to pay for a personal assistant to help him read, edit, email, and more. It makes Jacobs’s job a whole lot easier, and the unique position benefits the assistants as well, by giving them a taste of life as a principal investigator. So far, all have gone on to earn higher degrees, Jacobs notes.

Not everyone is anxious to broadcast their limitations, however. “It’s very difficult for a person with a disability of any kind to come into a challenging training environment and confidentially seek the sort of resources they need,” Brigande says.

Stephanie Kerschbaum, an English professor at the University of Delaware who studies disability among faculty, says that advisors should be careful not to make students or trainees feel compelled to disclose disabilities. “There are [equal opportunity] offices aimed at negotiating and ensuring the provision of accommodations,” she wrote to The Scientist. 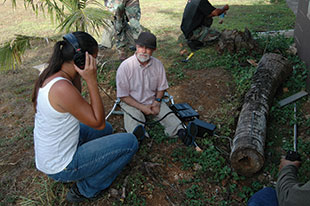 STRATEGIC FIELDWORK: Richard Mankin, an entomologist with the US Department of Agriculture, chose to study insect smell and communication—a line of research that was compatible with his limited mobility as a result of arthrogryposis.AUBREY MOORE OF THE UNIVERSITY OF GUAMSavannah Stark, one of the REU students who trained at Delaware this summer, says that one of the most valuable aspects of the program is simply learning what kinds of accommodations she needs to ask for. While doing experiments in the lab full-time, Stark, who was diagnosed with ADHD in fourth grade, has worked with her advisor to come up with helpful strategies, such as writing out the details of their discussion after each meeting. “I’ve definitely found some ways to adapt,” Stark says.

Other researchers with disabilities have also found ways to adapt the lab to them. In addition to assistive listening technologies, Brigande uses captioning software to make calls from his office. And his former employee, who was also hearing impaired, brought a full-time sign language interpreter to the lab each day.

For Albert Einstein’s Jacobs, adapting to his progressive blindness has been an ongoing process. At first, only his peripheral vision was poor; now, he essentially sees through a tunnel and can only read one word at a time. So rather than read, Jacobs often listens to research articles using a program called Dragon Medical, which he says has vocabulary for most of the science papers in his field. And when he’s working on papers with his students, he has them read the text aloud to him to expedite the editing process. “I find it to be very effective,” he says.

Maxine Linial, a virologist at the Fred Hutchinson Cancer Research Center in Seattle who lost her sight five years ago after being hit by a car as she crossed the street, also relies on technology to help navigate the logistics of life as a scientist. Specifically, she uses voice recognition software called JAWS to read and write emails and simple documents. But the program can’t pronounce scientific terms very well, she says. Early in her days back in the lab after the accident, she says, “I kept getting emails from ‘Oz.’ . . . It took me a few weeks to realize it was AAAS. I thought the wizard was emailing me.”

For more involved work, such as reading scientific literature, analyzing data, and reviewing papers, Linial has found that a full-time, scientifically trained assistant is the better option. She works closely with biochemist Karen Craig, who also does literature searches and collaborates with Linial to draft manuscripts and grant applications. “She’s a science sister,” Linial says.

In addition to changing their own lives and labs to work with their disabilities, many scientists are also working to improve accessibility within their institutions and fields. (See “Handicapable,” The Scientist, September 2015.) Brigande has worked with other hearing-impaired researchers to expand captioning at the Association for Research in Otolaryngology’s annual meeting to make it possible for them to participate without having to ask for help. “[Currently], we expect a hearing-impaired person to come to us and say, ‘I need assistive listening technology for this presentation.’ That’s the culture,” he says.

Margaret Price, an English professor at Spelman College in Atlanta who has written extensively on disability in academia, says that being proactive is key. “There’s a huge difference between, ‘Let us know if there’s anything you need,’ and ‘We’re already doing x, y, and z, and we hope that people will join in a conversation about what more can be done,’” she wrote to The Scientist.

Price began collaborating with Delaware’s Kerschbaum on improving the accessibility of academic meetings when Kerschbaum, who is deaf, found there was no interpreter at a disability committee meeting at the Conference on College Composition and Communication, forcing her to rely on Price’s notes. Since then, the committee has put together a website called composingaccess.net, which is full of resources to make academic presentations more accessible. “It is not only for deaf people, but also benefits people who may have auditory processing difficulties, who don’t see images well, [or] who may retain information better when they read [it] than when they hear [it],” says Kerschbaum. “The list goes on.”

To make meetings and seminars work for her, Linial says she often finds seminar speakers before their presentations and tells them, “If you give the kind of seminar I can understand, I will ask you a good question.” She has also learned to give talks without dependence on visual aids, a skill that she’s started to teach students in her department. “I used to be the 50 minutes, 45 slides kind of [speaker],” she says. “Now I know you have to get up and talk about your work.”