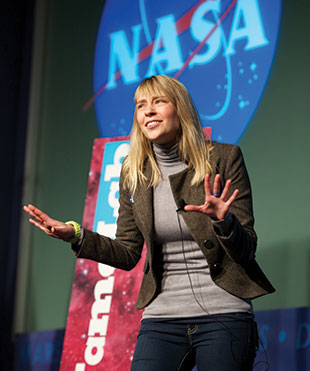 SELL YOUR SCIENCE: Justine Sauvage of the University of Rhode Island presents on her research into marine microbial ecosystems in the first season of FameLab USA, held at NASA’s national astro- biology conference in 2012. HENRY THROOPIn 2007, Alan Lawson, then dean of the graduate school at the University of Queensland in Brisbane, Australia, was looking for a way to morph the popular “elevator pitch” he had seen in the business world into a useful academic exercise. The practice, which challenges young entrepreneurs to explain their business plan to potential funders in less than 30 seconds, could help graduate students improve their oral presentation skills, he reasoned. But while a half-minute elevator ride may be all the time one needs to pitch a company, Lawson didn’t think it was enough time to describe a research project. The perfect amount of time for science, it turned out, had been...

Queensland was in the middle of a drought at the time, and water agencies had started to distribute waterproof egg timers for people to use in their showers to help them reduce their daily wash to less than three minutes. As Lawson dutifully used his egg timer to shorten his showers to the allotted time, he realized that three minutes was a sweet spot “that would allow people to seriously present a reasonably rigorous academic justification for their work [to nonspecialists], while leaving time to convey the excitement of doing it,” he says. In September 2008, Lawson hosted the first ever Three Minute Thesis (3MT) competition, drawing 160 graduate students from various disciplines across the university.

By the time the second 3MT rolled around at Queensland the following year, administrators at other Australian universities had become interested, and in 2010, the first Trans-Tasman 3MT competition drew contestants from 33 institutions across Australia and New Zealand. Today, 3MT has mushroomed to an annual event at hundreds of universities around the globe, and in recent years, other oral research competitions have gained popularity, including FameLab, which is now held in more than 20 countries.

Scientific communication is not a skill that’s emphasized in most graduate curricula, but more and more, university researchers and administrators acknowledge its importance for both early-career and established scientists. Pitting graduate students against each other to see who can give the most engaging presentation teaches basic science-communication skills that could help them land a job or establish collaborations with researchers in other fields. Dejargoning descriptions of scientific work becomes even more critical when communicating with a mass audience, notes Darcy Gentleman of the American Chemistry Society (ACS) who is organizing ACS’s first ChemChamps competition—a science-communication competition launched this year that is capitalizing on social media as a vehicle for spreading science research. “When you take it to the public, that barrier becomes even higher.”

Being able to speak to people outside of academia is a valuable skill in a changing funding landscape, says Kevin McCormack, public relations director at the California Institute of Regenerative Medicine (CIRM) and the organizer of the state agency’s 2012 Elevator Pitch Challenge. As federal budgets are squeezed, researchers are turning to nontraditional sources of money such as crowdfunding, where presentation can mean the difference between a successful campaign and a shuttered research project. “All of a sudden, you’re taking [research] away from being the exclusive domain of scientists and making it possible for many more people to understand,” McCormack says. “You find they’re suddenly really interested in your work.”

The first 3MT competitions at the University of Queensland were hastily organized, Lawson says. He decided to ban props to minimize flashy showboating, choosing to allow participants the use of a single slide only. Contestants faced off first at the departmental level, with winners advancing to compete against successful presenters from other disciplines, including engineering, sciences, and humanities. Both the judges and the audience selected bioinformatics graduate student Michael Imelfort as the top presenter that year, for his presentation on his research into short-read DNA sequence data.

As more and more institutions have jumped on the 3MT bandwagon, Lawson has been pleasantly surprised by the global popularity of the competitions. “I’m astonished at what I thought was going to be a small event with 100 to 150 competitors,” says Lawson. “Now there are 200 universities.” Today, the 3MT competition includes two additional rounds, as university winners progress to the regional heats to compete for a chance to represent Australia or New Zealand at the Universitas 21 3MT competition, an international online competition that began last year, drawing representatives from 17 countries.

Entomologist Linda Mason, associate dean of Purdue University’s graduate school, heard about 3MT at a 2011 workshop at the Alan Alda Center for Communicating Science at Stony Brook University in New York. She considers being able to speak with nonacademics an indispensable skill, and she thought it was a great idea. “We get a lot of [taxpayer] money to do research,” she says. “If we keep getting that money, they expect us to communicate that research, exactly what we’re doing and why we’re doing it.”

The following year she launched a noncompetitive version of the challenge, before starting Purdue’s official 3MT competitions in 2013. So far, she has sat on a single judging panel that oversaw all 150-plus Purdue participants, but next year, individual departments will be responsible for judging their own students, she says. The winners of those early rounds will move up through heats to university-wide competitions, mirroring the structure at the University of Queensland.

In addition to offering students the opportunity to speak in front of an audience, competitions provide them with feedback on how they performed—something that students and researchers don’t get during poster or oral presentations at conferences. After each presenter, judges critique their talk and give advice on what they can improve.

Moreover, some universities also offer prep courses to help the students boost their chances. When Joelle Muenich, an administrator at Texas A&M University’s Office of Graduate and Professional Studies, learned of a regional competition among Southeastern universities a year ago, she scrambled to organize a campus-wide competition. Despite the rush, she felt training sessions were an important component. She hosted a workshop for about two dozen students, in which she outlined the competition and walked the participants through exercises focused on the challenges of presenting to a public audience. Mason hosts a similar workshop in the fall, a semester ahead of the 3MT competition at Purdue. She uses improv techniques from theater to help students feel more comfortable in front of an audience and become aware of their own body language. A voice coach also speaks to the class about how to project one’s voice to a large audience.

Both participants and organizers say they can see improvement in the students’ communication skills. “Saying everybody’s a winner sounds corny. People come in at a certain level, but they leave improved,” says Mary Voytek, Senior Scientist for Astrobiology at NASA in Washington, DC, and one of the founders of FameLab USA. Mason agrees. “[Competitors] can speak about their research quickly and enthusiastically.”

Beyond the ivory tower

In addition to training scientists how to communicate, presentation competitions can bolster excitement about cutting-edge research, as well as share how taxpayer monies are being used. “It’s become more and more stressed: anything that the government funds needs to be explained,” says NASA’s Voytek. “We want an educated public as well.”

It was Voytek who championed importing FameLab from the U.K. to the U.S. The competition was launched in 2005 at the Cheltenham Science Festival in southwest England. Like 3MT, FameLab quickly gained global popularity, and since 2007, competitions have been held in more than 20 other countries.

After seeing a YouTube video of Cheung Ka Lun—the grand winner of the 2009 Hong Kong FameLab competition—describing his research on oxygen’s role as a life-giving molecule that also shortens lives by creating free radicals, Voytek was convinced that FameLab could help her agency’s astrobiology program meet its outreach and education goals. In 2012, she and her colleagues organized a pilot competition at NASA’s national astrobiology conference, open to graduate-student attendees. The next year, they got even more ambitious, partnering with National Geographic to open the contest to all science and technology fields. Of 85 entrants from more than 30 institutions, 11 finalists were invited to receive a half-day coaching session and participate in a national competition, after which judges would crown an overall winner who would represent the U.S. at the international competition in Cheltenham.

Like 3MT competitions, FameLab uses a three-minute time limit and stresses the delivery of an engaging talk. Unlike 3MT, however, FameLab allows the use of props, but no slides. FameLab encourages the use of song and dance, as well as other interesting delivery techniques. Daniella Scalice, one of the organizers for FameLab USA, remembers a biologist who presented at the first competition using a wooden bird, which she held as if it were a real bird of the species she was studying for her PhD thesis. The bird was on the verge of extinction and may already have disappeared from the wild. Scalice vividly recalls how the presenter treated the decoy as if it were a live animal. It was probably the closest she and the audience would ever get to the real, rare bird.

Such techniques can be particularly helpful when communicating with the public. Although these competitions rarely draw a nonscientific audience to the live event, presentations from FameLab, 3MT, and other science communication competitions are routinely posted online, where they attract a much larger and more diverse viewership. This year, ACS’s Gentleman will be using YouTube not only to share the presentations with online audiences, but to invite a broader group of scientists to participate. The first round of ChemChamps was open to young scientists ranging from undergraduates to pre-tenured faculty, and entry involved simply submitting a short video via YouTube. Winners will be chosen based in part on their online popularity, measured by the number of views each video receives, as well as on reviews from a panel of judges. A dozen semifinalists will be flown to this month’s ACS conference in San Francisco, where they’ll participate in an afternoon-long training session on public presentation. Five finalists will be selected from that group to give their talks at a public session at the conference.

Early on, organizers of such science communication competitions say they faced skepticism from faculty, many of whom were concerned that a contest would denigrate serious research. But CIRM’s McCormack refutes the idea that making science easier to digest cheapens it in any way. “Just because you’re simplifying it doesn’t mean you’re dumbing it down,” he says. “You’re just making it accessible. I don’t think it trivializes it at all. In fact, in many ways, I think it raises it.” 