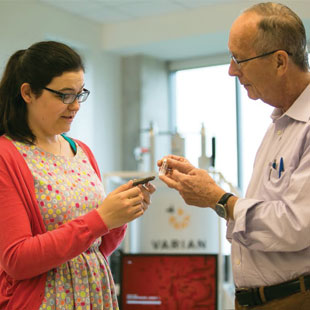 CONTINUING TO MENTOR: Joseph Lambert, a retired researcher formerly of Northwestern University, discusses research results with Allison Levy, an undergraduate student at Trinity University, where Lambert continues research on a volunteer basis.TRINITY UNIVERSITY, JENNIFER GOODRICH BALREIRAJohn Dowling never did a postdoc. In what was a fairly typical career transition in 1961, he went directly from Harvard graduate student to Harvard assistant professor, and, after a few institutional moves, eventually settled at the university as a full professor in 1971. (See “An Eye for Detail,” The Scientist, October 2014.) Now retired at the age of 79, the vision researcher plans to make up for skipping what has become a critical part of every new scientist’s career by joining the labs of his younger colleagues, neuroscientists Jeffrey Lichtman and Joshua Sanes, as a postdoctoral fellow. Dowling believes that older researchers can still be “quite creative...

Retirement has not been mandatory for professors in the U.S. since 1994, but many still choose to give up their teaching and administrative duties—and their salaries—while continuing to spend time in the lab. Some, like Dowling, choose to take a step down the academic ladder by pursuing post-retirement postdocs; others find themselves able to start or continue leading small labs. While doing research in retirement is unconventional, options and support systems for many professors contemplating their research future are out there and growing more plentiful. Some universities have even set up special associations for retired faculty members. Here, The Scientist speaks with a handful of researchers entering retirement but not quite ready to walk away from science altogether.

For researchers who plan to retire, the first step is crafting an exit strategy. Dowling aimed to cut his lab in half by the time he was 70, and at 75, to shut it down entirely—a goal he finally reached in the summer of 2014, as he turned 79. Similarly, organic chemist Joseph Lambert, who retired five years ago after 45 years at Northwestern University in Illinois, stopped taking new graduate students five years before his planned retirement age of 70.

A second consideration is location. Many researchers, like Dowling, choose to stay at their own institution, and simply move down the hall to the lab of a colleague. Plant biochemist and photosynthesis expert Andre Jagendorf, who retired from Cornell University in 1996, didn’t even have to go that far: he remained in his own longtime laboratory space as a member of Robert Turgeon’s group, which moved in upon Jagendorf’s retirement. “The standard model of retire, no longer teach, no longer draw a salary is quite viable at your home institution,” Lambert says. “But moving to another place is a bit more unusual.”

Knowing he wanted to move back to his hometown of San Antonio, Texas, where he had recently purchased his childhood home, Lambert spent his final years at Northwestern tailoring his research group to match a hoped-for position at local Trinity University. He shifted his lab to one rich in undergraduates and postdoctoral fellows to prepare for a similar composition at Trinity, which does not have graduate programs in chemistry. He also changed his research focus from wet-lab chemistry to a less resource-intensive side project he’d been pursuing on and off since the 1970s: investigating the chemical properties of amber. Meanwhile, he and then Trinity chemistry department chair Steven Bachrach negotiated with the administration to set up a unique position for Lambert: research professor of chemistry. The nonsalaried role doesn’t take up lab space or take away a hiring position from a younger colleague, but it still allows Lambert to mentor students and conduct research. He continues to publish three or four articles a year on the nuclear magnetic resonance spectroscopy of amber, for example, and has already written two books. “I’m a member of the Trinity staff, and I feel like I’m contributing to their objectives,” he says.

Nancy Mills, who retired this year from the chemistry department at Trinity University, also knew she wanted to relocate after retirement, but she didn’t know where exactly. So she used her last sabbatical, in 2008, to work in Mike Haley’s group at the University of Oregon to test out the town of Eugene. She found it to be a good fit, so Mills and her husband began planning their move, and Mills began strategizing how she’d continue her research once outside the comfort of her Trinity lab. While her work had long relied on both computational and wet-lab experiments, she realized that the latter would be hard to conduct after her retirement, due to a lack of access to the necessary space and equipment. So she started focusing her last years at Trinity on experiments in the lab. “I began to take all the computational projects I was envisioning and just put those on the back burner,” she says, saving them for her retirement.

One can do wonders when you say, “Oh, by the way, I don’t want any money, all I need is an office.”

Then, as luck would have it, Haley got in touch to tell Mills that the computational scientists in his group had graduated and to ask if she would be willing to fill that role. Mills jumped on the opportunity. Not only had she found a location for retirement, but her time in Haley’s lab ended up landing her a job. “The connections I made on sabbatical meshed nicely with my goals for retirement,” she says.

One of the advantages of integrating into a younger faculty member’s lab—the retirement research approach taken by Jagendorf, Mills, and Dowling—is an ability to focus on the science. “He works more or less like a postdoc would, except he has his own office,” Turgeon says of Jagendorf, who comes in five days a week to conduct his own research as well as help out with washing dishes or running the high-performance liquid chromatography machine. “You can work in the lab and do things you enjoy, but you’re not faced with a lot of bureaucracy or teaching.” 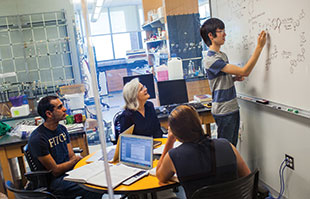 MILLS’S MILIEU: Nancy Mills brainstorms with members of her Trinity University lab before retiring to Eugene, Oregon, where she remains active in research as a part of Mike Haley’s group.DON HAMERMAN/TRINITY UNIVERSITYIt can also simplify the funding situation. Most late-career postdocs work on a volunteer basis and don’t draw a salary, and the same is true of Lambert, even though he is running his own group at Trinity. “One can do wonders when you say, ‘Oh, by the way, I don’t want any money,’” Lambert jokes. “All I need is an office.”

For those in charge of their own projects, however, funding can be an issue. “The main problem is that the granting agencies don’t look kindly on old people,” says Ludwig Brand, 83, who retired from Johns Hopkins University in 2012 after 50 years as a professor of biochemistry there. Moreover, even those supported by their hosts’ funding can encounter problems obtaining research materials, as employees not specifically listed on grants sometimes cannot order their own supplies.

For this reason, Lambert negotiated his position at Trinity to be on the tenure track, allowing him to apply for grants, such as one he has received from the Dreyfus Foundation. (In two years, at age 77, he will be up for tenure for the second time.) At Johns Hopkins, Brand has another option: the Johns Hopkins Academy. Established the year Brand retired, the academy provides retired Johns Hopkins faculty with access to facilities, including offices if their home departments don’t have space, and a few thousand dollars a year to enable them to continue their research, travel to conferences, and organize symposia.

“The academy is a win-win situation . . . both for the university and the faculty,” says Brand, who in 2013 published a paper on protein dynamics and has a second in press with the academy’s support. He also continues to serve on graduate board exams, teach freshman seminars, and work with students and young faculty. “One advantage of not writing grants is you have a little more time to mentor,” Brand says.

A handful of other institutions, such as Emory University and Arizona State University, have organizations known as “emeritus colleges” that provide intellectual programs for retired faculty. While some institutions may provide offices or small research grants, most are primarily focused on providing intellectual engagement for retired professors on a shoestring budget. Arizona State’s emeritus college, for example, even runs an academic journal for its members. As of October 2013, there were eight emeritus colleges or equivalent institutions at American universities, and their ranks continue to grow. 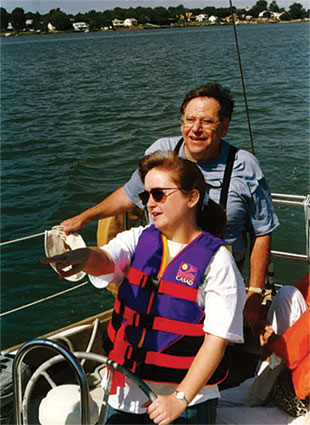 MASTER NAVIGATOR: Circa 1992, Johns Hopkins University’s Ludwig Brand, now retired but still active in research, gives a sailing lesson to graduate student Martha Brown on Middle River, Maryland.COURTESY OF LUDWIG BRANDAlthough Mills is nervous about retirement because it’s a “one-way path” and you can’t “unretire,” she is excited that her future collaboration will continue to engage her mind. “It’s potentially a godsend to be able to work with Mike Haley’s group,” Mills says. “Intellectual stimulation is harder when you work all by yourself.”

Retired researchers can also be a boon to the younger faculty hosts. In addition to the fact that most retired professors work on a volunteer basis, contributing to the output of a lab while not requiring a salary, the wisdom of the older lab member can be a real benefit to the group, says Turgeon. “[Jagendorf] just has a lot of insight,” he says. “He often has some pretty knowledgeable and inspirational things to say.”

David Weiner, a pathologist at the University of Pennsylvania who hosted retired clinical dermatologist Henry Maguire as a full-time postdoc in his lab from 1997 to 2011, couldn’t agree more. Earlier in his career, Maguire had worked with Martha Chase, one of the researchers who conducted the storied 1952 Hershey-Chase experiment that helped confirm DNA as the hereditary material of modern organisms. In retirement, Maguire’s expertise was an invaluable asset to the group, Weiner says. “He always challenged us: What is the importance of this work? What is the point of doing this? . . . He made things kind of slow down, took you out of the rat race, and gave you time to think about things in an elegant and important way.”

Maguire’s experiences were also an inspiration to the next generation of scientists, Weiner adds. He recalls a group of students gathered around the 80-year-old Maguire as he slowly and methodically explained testing for delayed-type hypersensitivity, a procedure he had first championed half a century earlier to study inflammatory responses and compare in vivo immune reactions in the skin to a visual readout. “They will always remember how they learned how to do those experiments,” Weiner says.

When looking for a lab to retire to, Lambert says it’s all about personalities. “The most important thing is finding a friendly environment.”

“Labs are like families,” agrees Weiner. “Henry really contributed to that rich fabric and made it so much more wonderful.”