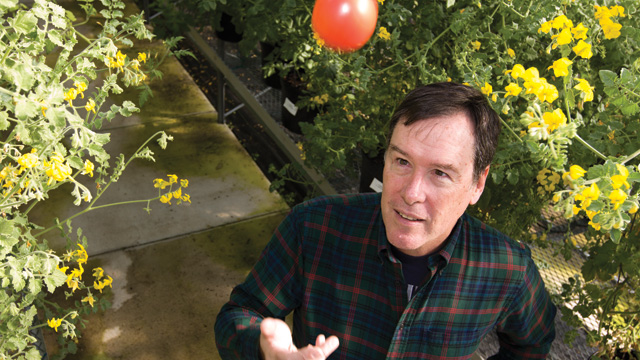 ENGINEERING A BETTER TOMATO: Plant geneticist Harry Klee moved from a postdoc in academia to an industry lab at Monsanto. After a decade of research there, he made the switch back to basic research at a university. TYLER JONES, UNIVERSITY OF FLORIDA/IFAS

Plant geneticist Harry Klee always assumed that, after finishing his postdoc, he’d pursue an academic career. But one afternoon in the mid-1980s, he opened up an issue of Science to find a paper reporting the first “transgenic plant in the history of mankind,” he recalls. It wasn’t the accomplishment so much as the fact that the paper was written by scientists at Monsanto that blew him away.

At the time, industry was considered the career path for scientists who couldn’t cut it in academia, he says. Yet, although he’d gotten a job offer as an associate professor, when the time came to set out on his own,...

I had read and been on
grant panels for a hundred grants before I ever had to write one.
—Harry Klee, University of Florida

However, after a decade of research that he “wouldn’t trade for anything,” Klee hit a glass ceiling. He felt pressure to leave research for management roles. Instead of succumbing to the inevitable in industry, he decided to put out feelers. He found the perfect spot at the University of Florida, working on a project to improve the tomato using genetic engineering. But the jump back to academia wouldn’t have been possible without his publication record and dedication to a focused research topic, Klee cautions.

For advice on how to transition from academia into industry and back, The Scientist interviewed recruiters on both sides and researchers who have made the round trip, to learn how they did it—and how they’d do it better next time.

Don’t stress about your slides
Far more important than glossy slides, says Megan Driscoll, founder and president of PharmaLogics Recruiting, is the quality of your presentation to the interview panel. The interviewers will want to see how you work through a scientific problem. “It’s more about how you present your data, think critically, present problems, field questions,” she says. “How good your presentation is has very little to do even with the topic or the data.”

Network, network, network
Having contacts who can vouch for you at the company you’re applying to can substantially increase your chances of landing the position. Recent or soon-to-be grads should “network with the people who graduated ahead of you: anyone who is in industry and who has graduated in the previous 5 years,” Driscoll says—both for advice and for recommendations.

Revise your resume
Add a “skills summary” section that gives a good overview of your expertise, including specific methods at which you excel. But be honest. “Don’t put analytical methods in your skills sections that you’ve done one time,” Driscoll cautions.

Do your homework
Make sure the interviewers know why you want to work for their company in general, and what attracts you about their research in particular. Study their website, and if you know which representatives you’ll be meeting, read their papers and familiarize yourself with their research. “[Companies] want someone who has done their homework, and who knows what they can contribute to the team.”

Prepare some real-life experiences
It’s common in interviews, Driscoll says, to be asked for an example of how you’ve handled conflict in your lab. She says it’s best to have a few scenarios ready to share. For example, if there was a disagreement about lab equipment use, explain how you showed leadership by creating a sign-up sheet and starting a discussion about expectations for the tool’s usage.

GETTING BACK TO ACADEMIA

Keep publishing
It’s unanimous: continuing to publish while working in industry is absolutely vital if you want to return to academia one day. “What makes it possible to jump back and forth is publishing, and if you can’t publish in industry, you’re not going to be able to jump back to academia,” says molecular physiologist Sue Bodine, who transitioned from Regeneron Pharmaceuticals to the University of California, Davis. Publications prove that you’ve continued to do quality science, can produce publishable data, and can ultimately win grant money.

But if you want to publish, you may have to push yourself to make it happen. While many companies encourage publication, “the problem is that there are no rewards for publishing, so you really have to do it on your own time,” says Klee. That means doing experiments with positive and negative controls beyond what your supervisor requires; taking beautiful photos; and remembering to go back and publish after patents are filed, he adds.

Do a PubMed search
If you think you might want to return to academia one day, ensure from the outset that promises of a publication-friendly environment aren’t empty. “Every company says that 20 percent of the time you can work on whatever you want,” including publications, says Martin Seidel, the head of the Genomics Institute of the Novartis Research Foundation. But don’t take them at their word, he says; instead, do a PubMed search to see just how frequently the company publishes, and assess the quality of the journals. Then search for the section you might be interested in joining and look up the records of researchers in that area to make sure you’re “joining a part of that company where [publishing] is a tradition.”

Choose your meetings carefully
“It’s tricky when you’re in industry: if you’re spending all your time [attending meetings], then you’re the first one to go” when layoffs come around, says biochemist Patrick Griffin, a former research director at Merck who now directs the Scripps Translational Research Institute in Florida. Companies are businesses, so if you spend too much time working on presentations and attending meetings, you are less valuable. But it doesn’t mean you shouldn’t attend any conferences. His advice: scrutinize agendas ahead of time to select the conferences attended by those people most likely to help you in the future, such as potential collaborators, academics working on similar projects, and administrators of programs that interest you.

Build a scientific narrative
Just as the career of an academic researcher is, at heart, a scientific narrative, so should your industry science follow a single thread. For Klee, that thread was working on transgenic plants and eventually honing in on the tomato. Eva Chin, a molecular kinesiologist at the University of Maryland, College Park, spent time in several branches of Pfizer’s research and management—but, “except for my two years as a project manager, I always focused on the same theme,” she says. When applying for academic jobs, she presented her story about molecular signaling in muscle, beginning with her postdoctoral research; added in data from industry abstracts and presentations; and “integrated what I had done with what people at the universities had done.”

Old acquaintances should not be forgotten
A good way to keep one foot in the university once you’ve gone into industry is by “maintaining contacts with classmates of yours that went into academia,” says Griffin. Those people can not only help you find a position in the future, but can speak to the quality of your science to potential employers. Attend the same meetings, and even develop collaborations. Chin, for example, sent transgenic mice she developed at Pfizer to her colleagues in academia—and later, they helped her secure her job. “Having known these people throughout my earlier career, they knew I had done really good work,” and her continued contact helped solidify her scientific reputation in the field.

Get experience with grants
Klee started reviewing grants for the US Department of Agriculture and the National Science Foundation through contacts he made at meetings. “I had read and been on grant panels for a hundred grants before I ever had to write one, so I had a good idea of what a good grant looked like and what a bad grant looked like.” This, says Klee, reassured the search committee that he would be able to win funding, despite never having written his own grants. And it wasn’t all show: it really did keep him from floundering. “My first grant was funded,” he says. “I knew what they were looking for.”

Keep your eyes open
Finding the right academic position to make the switch to is the hardest part. “You have to be surveying the landscape constantly,” says Griffin. For example, in recent years many academic institutions have taken an interest in developing translational research programs, where industry-learned skills are esteemed—a development that helped Griffin land his job. Another selling point might be a screening technique you picked up in industry that could be applied to a burgeoning area of academic research. These kinds of opportunities are often found at medical or technology-focused schools that are “very entrepreneurial and oriented towards having an impact on biomedical research,” he adds.

SUCCEEDING IN ACADEMIA ONCE YOU'RE BACK

Negotiate a good start-up package
When Chin reentered the academic lab, she assumed that with her data and big plans for research she’d be able to quickly secure a few grants. But 3 years into academic work, she has yet to rake in big bucks from government funds. “It takes time to get a research lab running, and you need to know that it may be 3 to 4 years in before you can land a grant,” she says. She wishes that she had known this before she returned to academia, because she would have negotiated a better contract. “Your department should be supporting you through that time,” Chin says. Many associate professor jobs only cover 9 months out of the year, so make sure you negotiate summer pay on top of that, she adds.

Find a grant-writing mentor
“One of the hardest parts when you come back—even if you come back as a full professor—is getting back into the mode of writing grants,” says Bodine. It’s not only about carving out time to write grants, but also about learning how to structure them. “You need a good mentor to help you get your grants: how to write them, how to approach them, and how to sell your ideas,” she says. “I had one mentor that I think acknowledged the difficulty and helped me a lot and, in hindsight, it was more difficult than I thought it was going to be.”

Keep your lesson plans
When Bodine left academia, she never thought she would return, so she tossed all of her lecture notes and lesson plans—a huge regret. “All of sudden, you’re developing all these new courses and lectures, teaching stuff you haven’t touched for a while, and relearning everything,” she says. Keeping those old notes can help tremendously, both for remembering how to best structure lectures and for refreshing one’s memory.