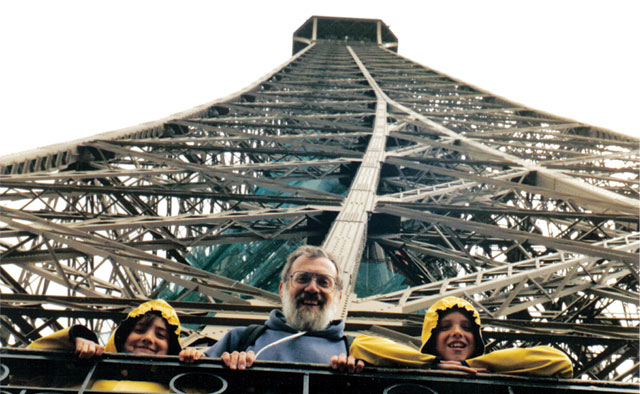 AROUND THE WORLD: David Matthews and sons visit the Eiffel Tower during his sabbatical, taking advantage of travel opportunities while away.© NANCY MATTHEWS/SABBATICALS 101: A PRACTICAL GUIDE FOR ACADEMICS AND THEIR FAMILIES (NEW FORUMS PRESS)

Medical statistician David Matthews had arranged to spend his sabbatical from the University of Waterloo in Canada overseas at the University of Oxford in 1998, but he and his family nearly didn’t make it to the U.K. at all. Matthews’s wife Nancy had to schedule outpatient surgery three days before their departure. The doctor’s orders to rest went out the window when she returned home to find that the family’s Kitchener, Ontario, house was far from ready for arriving tenants. After some frantic last-minute packing, David and Nancy loaded their luggage and their two school-age children, Lucas and Josh, into the car of a friend who was driving them to their flight, with...

A missed exit and an illegal U-turn later, they were back on their way to the airport, tickets in hand, arriving just an hour before their plane was scheduled to take off. Missing the flight was not an option, as Air Canada workers were scheduled to go on strike the next day. Miraculously, they made it to their gate just in the nick of time, even though Nancy was confined to a wheelchair to avoid spending too much time on her feet in the long airport lines. But on arrival, they were going through British customs when more bad luck struck: young Josh got sick, vomiting all over one of their carry-on bags.

Despite the inauspicious start to the Matthews’s year in Oxford, the trip turned out to be a resounding success. “It ended up being the most fantastic year possible,” Nancy recalls. “I thought of Oxford as home.”

The family’s hectic departure aside, Nancy, who describes the experience in her 2008 book Sabbaticals 101: A Practical Guide for Academics and Their Families, credits careful preparation and an open mind with making her family’s year abroad a great one. “Be prepared,” she tells The Scientist. “And keep smiling, because there will be times when you ask yourself, ‘Why are we doing this?’”

There are people who can run your lab. You’re not indispensable.—­Denise Soltis, Drake University College of Pharmacy and Health Sciences

But when it’s done right, the answer to that question will become clear. Academic sabbaticals offer a chance to refresh one’s mind and reinvigorate one’s focus so that, along with photographs and memories, travelers return to their home institutions with new perspectives, new ideas, new projects, and new collaborators.

“I would definitely recommend that people take a sabbatical,” says Colleen Webb, an evolutionary ecologist at Colorado State University who is currently on sabbatical at the Max Planck Institute for Biogeochemistry in Jena and the German Centre for Integrative Biodiversity Research in nearby Leipzig. “It helps renew your interest in science and . . . helps you develop new research directions.” 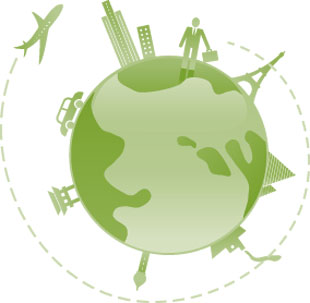 © JUANLJONES/ISTOCKPHOTO.COMThe word sabbatical, from the Latin sabbaticus, Greek sabbatikos, and Hebrew Shabbat, literally means  “ceasing.” Of course, for academics, a sabbatical rarely means the complete cessation of work. While they are given the opportunity to let their home professional fields lie fallow for a year or so every seven years, sabbatical takers often use the opportunity of a break from their normal routine to teach, research, write, or practice medicine in some other region of the globe. And many don’t travel alone.

Like Matthews, Webb chose to bring her family: her husband, a Colorado State biogeochemist who is also taking time away from his home lab to study methane flux and global climate change at Max Planck in Jena, and their four children, aged 10, 8, 5, and 3. “We thought it was a great opportunity to do something exciting as a family,” Webb says.

Of course, moving a family of six to a new country is no easy task, and Webb carefully planned the trip to make the transition as smooth as possible for everyone. Eight months before she and her family departed, Webb hired a German language tutor to come to their Colorado home and work with her two older children, who are now excelling in German schools where English is not spoken. Webb herself sat in on a first-year German class at Colorado State to brush up on her own language skills.

For her absence Webb also prepared her lab, which supports six postdocs and three grad students. She did her best to finish off as many open projects as she could before she left so that she could focus on forging ahead with new work in Germany. But in terms of preparing the lab for the loss of her physical presence, Webb credits her egalitarian approach with making her departure simple. “I’m not very authoritarian in the way I run my lab. They’re used to coming to me for feedback, but I’m not bossing them around,” she says. “So there’s not a power vacuum since I’ve left.”

Having trust in your colleagues is key to making everyone, including yourself, feel comfortable with an extended leave from your home institution, says Denise Soltis, assistant dean for community and global engagement at Drake University College of Pharmacy and Health Sciences in Iowa. In advance of her 2012 trip to the Hillside Health Care International clinic in Belize, Soltis spread responsibility for her many administrative tasks among other faculty and staff in the department. “It took me probably a year to prepare to leave,” she says. “It’s a busy position with a lot of things to do.”

Though her job is administrative in nature, Soltis says that the same principles apply to laboratory scientists as well. “There are people who can run your lab,” Soltis advises. “You need to trust in them and train them. You’re not indispensable.”
“It’s going to be a big deal to hand that over to someone,” Nancy Matthews agrees, “but it will be worth it.”

Being in two places

Susan Hatters-Friedman, a perinatal and forensic psychiatrist at Case Western Reserve University School of Medicine in Cleveland, took a year-long sabbatical at the Mason Clinic in Auckland, New Zealand, where she conducted research on child homicides and saw patients at the clinic. During her busy sabbatical year, Hatters-Friedman says, she was able to return to the U.S. for international meetings to catch up with colleagues that she sees on an annual basis. “When you’re an academic in America, you’re used to seeing your national or international colleagues at least a couple times a year,” she says. “So I felt that that was something important to do.”

But even if a tight travel budget doesn’t allow for a periodic return home, there are plenty of options for keeping in touch with labmates, colleagues, and advisees who are holding down the fort. “It’s very easy to stay in touch with all the technology,” says Soltis.

“We were already used to lots of virtual meetings, and we knew that we could collaborate from a distance,” agrees Colorado State’s Webb, who says she keeps in touch with her students and advisees via e-mail and Skype, among other modes of electronic communication. She notes that at the start of her sabbatical she tried to keep to her usual weekly meetings with each of her mentees, but has recently decided to have virtual office hours when the people in her Colorado lab can contact her.

Of course, Webb’s main focus since she began her sabbatical in August 2012 has been her research in Germany. While her Colorado State lab models the spread of virulent disease through ecosystems and the interplay of ecological and evolutionary mechanisms, her sabbatical has given Webb the opportunity to further develop trait-based approaches to improve the predictive ability of ecological sciences. “I have three new projects that I am trying to start, and that has the potential to result in a minimum of four publications,” she says.

Webb even got her labmates at home in on the action. Not only have several students visited her in Germany, Webb says, but her current postdocs and a former grad student in Colorado have become involved in aspects of the new projects she’s started, even from afar.

Hatters-Friedman also expanded the scope of her research while on sabbatical. Working with information from New Zealand police and coroners, she and her colleagues scoured medical and mental-health records surrounding cases of child homicides nationwide—methodologies that she says would be much more complicated to employ in the U.S. “To do the same thing in America would require contacting thousands of coroner’s offices.”

The benefits of taking a sabbatical will continue to reveal themselves long after returning home. “When you’re learning, then you’re coming back as a better researcher, a better teacher, and a better employee because you are taking time out to refresh your perspective,” says Soltis.

While on sabbatical in Belize, Soltis not only saw patients as a pharmacist, she scoped out potential training facilities for Drake pharmacy students looking for international rotations. She then established a relationship with a clinic that several Drake students have since visited.

Hatters-Friedman also forged strong ties while on sabbatical, managing to secure a dual appointment with the Mason Clinic in Auckland, to which she now travels frequently. “There is a great benefit for the home institution as well,” she notes. “When you come back, you bring back this new perspective, and giving talks in your host country increases the visibility of your home institution.”

And, of course, sabbaticals are the perfect time to network. “Both my husband and I have tons of new collaborations,” Webb says. “There are more opportunities to take advantage of than we possibly could.”

But while sabbaticals can be great for personal and professional exploration, researchers far from home are typically ready to return by the end of their excursion. “I miss my lab,” says Webb. “I have a great group of people, and I’m not spending much time with them.”