Jack London once said that he would "rather be ashes than dust." The distinction between the two might be difficult to make by naked eye, but a scanning electron microscope could reveal a world of difference. So says John Weisel, a University of Pennsylvania cellular and structural biologist who has spent decades divining the mechanics of the very small, particularly the biophysics of blood clotting But he, like London, has heard the call of the wild. And it's taken him places miles from power lines, let alone electron microscopes. It's what drew him to spend several weeks of his sabbatical on the remote Isle Royale in Lake Superior.

The 134,000-acre island has been home of the longest running predator-prey study in the world. There, researchers follow the tightly linked fluctuations in moose and wolf populations. Isolated from most other predators and prey, the animals provide a unique field opportunity. When Rolf Peterson, who has directed study at the national park since 1975, received a cover letter, CV, and list of publications from a scientist with a background in cell biology, biophysics, and imaging, he wasn't sure what to make of it. "Usually I get people willing to volunteer who really aren't able to do that much for us, but [Weisel] obviously had tons of experience." Peterson, a professor of wildlife ecology at Michigan Technological University in Houghton, hires some undergraduates every year, but generally sends aspiring amateurs to Earthwatch Institute, a non-profit organization that sets up guided volunteer projects.

Weisel was too persistent for that. Though he had had no ecological training, he wasn't a stranger to the outdoors. An avid hiker, kayaker, and mountain climber, Weisel has trotted the globe in search of a good dose of nature. In 1989, he was with one of the first groups to hike Central Asia's Pamir Mountains since the Soviet Union had closed them to the public. So Peterson relented.

On Isle Royale, Weisel took to the field almost immediately, hiking to remote ridge tops and taking regular telemetric readings to track the three wolf packs that roam the island. Weisel says he asked Peterson how his hundreds of readings jibed with what others had shown. Understandably there was no good answer. "Nobody had ever been able to do anything like that," says Peterson. Most people get some sleep. Peterson spends most of his summer without electricity or running water but still marvels at Weisel's ability to rough it. "I use it as an example for our undergraduate field assistants of what great scientists do when they have a field opportunity."

Weisel says the most important thing he brought with him was his naïveté to the common ecological questions. Instead he asked about everything: moose arthritis, snout shape, tick burden, you name it. Weisel was intrigued by how easily Peterson and others could identify bits of fur. When the fur comes from wolf scat, however, identification can be more difficult. So, when he returned to the University of Pennsylvania, Weisel tried to find out if imaging technology could help.

At their lab, Weisel's colleague Chandrasekaran Nagaswami showed me the baggies in which they keep their collection: coarse moose hair, fine snowshoe hare fur, loon feathers, and the topic of Weisel's first-ever paper in a zoological publication, otter hair. Closer inspection of the river otter's downy underhair revealed an unexpectedly complex structure of interlocking fins (inset) that Weisel and colleagues hypothesize works to keep out water and trap air bubbles, aiding in insulation.1 Otters lack the layers of fat sported by other aquatic mammals in cold climates.

Weisel has identified the unique scaling patterns for hairs from different animals, and now he and Nagaswami are checking furs of scatological origin. Although moose is the main wolf staple, smaller mammals supplement that diet to the tune of 10% by some estimates. He went back last summer to replenish his samples of lupine leavings.

Weisel talks of his trips with a starry-eyed appreciation. The lab is obviously not his only natural habitat. And as it was for London, the wolf is a big part of what draws Weisel. "The wolf is a powerful symbol of the wilderness," he says. "I think they have that effect on a lot of people." 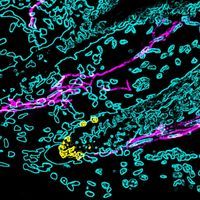 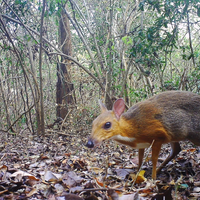 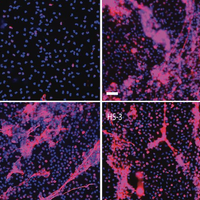