Just because I am an ethicist does not mean I am opposed to making money, particularly when it comes with solid scientific discoveries that benefit human kind. The field of nanotechnology carries that promise. Unfortunately, many ecorestoration, environmentalist, or "green movement" corporations are more concerned with greener wallets than a greener world.

Planktos is a for-profit ecorestoration company, based in San Francisco, which aims to restore damaged habitats. Its plan is to release "forest-sized areas" of nano-sized particles of zero-valent iron (ZVI) into the ocean, with the hope that plankton will take up that iron, engage in enhanced photosynthesis, consume greater quantities of carbon dioxide from the environment, and curb global warming.

Planktos is not the only group seeking to capitalize upon the convergence of the green movement. Green building, using the advances of nanotechnology, could make our houses better insulated, more brightly lit with less energy, more efficient in countless ways, or nearly indestructible. This fall, the Green Technology Forum, a research and advising firm on nanotechnology, released a report that lauded "how a single nanotech innovation is saving one company $2.6 million in energy costs and reducing their carbon dioxide emissions by 35 million pounds per year."

This all sounds great, but early findings about Planktos' technology have not produced encouraging results, and multiple prominent scientists and environmental groups have debunked or dismissed the company's claims. Planktos is promoting bad science, which gives good and important science, namely nanotechnology, a bad name.

What is troubling here is that nanotechnology, being embraced the world over as the panacea for all that ails the way our materials work or our drugs react in the body, is being utilized in ways that at the very least could be described as reckless or, at the worst, harmful to the public perception and the progress of these technologies. The long-term implications of releasing ZVI into the oceans are not known. How will the currents carry these particles? How long and to what effect will the iron affect plankton plumes? What kind of warnings do we put on the houses of people living with paints with nanoparticles in them or whose walls of their homes are made of nanocomposites? Could these nanocomposites become the asbestos or lead for the 21st century?

What is also troubling is that there is no single body or organization responsible for monitoring nanotechnologies in any given arena - public health, environmental health, or other areas. We have no idea what the standards for risk assessment in these arenas should be. No single group governs or determines this, nor is there consensus.

There are a couple schools of thought. One says leave it alone, given that we are regularly exposed to all kinds of nano-sized particles from foods, pollution, drugs, cosmetics, and others. Another approach emphasizes being "responsible," encouraging caution and thoughtfulness, but it never defines what "responsible" really means. Others espouse the "precautionary principle," stating that if there is the potential for harm to the environment or the public, the burden of proof is on the scientists to prove that the technology is safe.

I think there's something more subtle that must be addressed. We can't expect scientists alone to conduct "responsible" research, given that they tend to embrace technology, and therefore approach the question with a bias. Leaving it to companies who have an incentive to release the technology, and start turning profits, is also not the way to go. Consequently, ethicists and the general public must be engaged in discussions about which of the technologies will be developed, when and where they will be introduced, and how they will be evaluated for safety.

We need a pragmatic approach to thinking about these technologies, which falls somewhere between the Draconian rule of the precautionary principle and the free-love view of the Wild West nano-loving scientists. And I am quite confident that such a path does not take us toward a giant iron dump near the Galapagos, nor a nano-house. 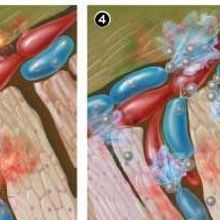