On February 13, 2005, a man living in a little town near Navegantes in southern Brazil, took his family for a Sunday outing on interstate highway BR-101, which runs alongside an exceptionally beautiful stretch of beaches in Santa Catarina state. In need of refreshment, they drank sugarcane juice from a kiosk by the side of the road. The cane was fresh, machine-crushed in front of them over a block of ice in a jug - just the thing to cool them off in the heat of the southern summer. A short time later they all came down with fever, swollen lymph nodes, malaise, and enlarged livers and spleens. In a few days, four of them were dead.

After all common infections had been excluded, doctors came up with the diagnosis of Chagas' disease, also known as American trypanosomiasis. It kills around 10% of those infected, and one in four survivors may develop a chronic infection that eventually causes serious heart damage. However, the disease had never been reported in the area where the family fell ill, being typical of bug-ridden thatched houses in rural areas of Brazil and much of Latin America. Here, triatomid insects, tough little bloodsuckers about an inch long, live in the thatched roofs and wall crevices of adobe houses. One such dwelling may harbor thousands of the little brutes, and an unfortunate soul sleeping there may get more than 25 bites per night. The family from outside Navegantes, however, lived in a bug-free masonry house in town.

Up till then, the only known way for town-dwellers to catch the disease was from a blood transfusion or organ transplant from an infected rural donor, but no one in the family had had anything like that. Grasping at straws, epidemiologists checked out the cane juice kiosk. They found cut sugarcane stacked in the open, and the smoking gun: an infected bug that had evidently been brought in from the cane field where it had fed on an infected wild animal, probably an opossum. The high death rate in these cases was attributed to the much larger dose of parasites ingested than that which enters through a bite.

By mid-March, 2005, there were 25 confirmed cases, six deaths, and possibly more than 50,000 exposures to cane juice - including among international travelers - along the beaches of Santa Catarina. The authorities closed down all the kiosks along the relevant stretch of highway BR-101, banned blood donations from anyone who had drunk cane juice from them within the previous two months, and recommended that anyone who had done so, and developed a fever and similar symptoms, consult a physician.

Since then, infections have been traced to other contaminated popular juices, such as those squeezed from the fruits of the tropical açaí and babassu palms. Açaí is a popular, refreshing drink from the juice of the deep purple berries that sprout from a short, slender, multi-stemmed jungle palm. Nowadays, açaí causes an average of one case of Chagas' disease every four days in the Brazilian Amazon. In recent years, the pulp and juice has been exported to southern Brazil, and also to the United States and England, where it can be found in shops frequented by Brazilians and health food fans.

Only last year, after a long and hard-fought campaign of spraying bug-infested houses with residual pyrethroid insecticides, the Pan American Health Organization certified Brazil as free of the domestically transmitted disease. But the disease remains in wildlife and the bugs that feed on them, so now the risk is from bugs accidentally ground up in regional beverages. This is another example of what happens almost every time we think we have controlled a disease - a rump remnant surfaces to bedevil us. Examples include vaccine-associated polio, and extensively drug-resistant tuberculosis (XDR TB).

To coin a paraphrase, the price of freedom from disease is eternal vigilance, which, in this particular instance, takes the form of ensuring that cane and fruit are washed free of bugs before crushing. The drink will be a lot more refreshing.

Jack Woodall is former director of the Nucleus for the Investigation of Emerging Infectious Diseases in the Institute of Medical Biochemistry at Brazil's Federal University of Rio de Janeiro. jwoodall@the-scientist.com 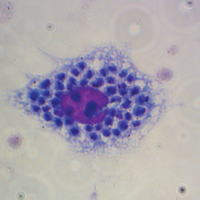