Of all of Stephen Jay Gould's essays in Natural History, one stands out as my favorite—for egotistical reasons. "Hopeful Monsters" appeared in October 1980. German-American geneticist Richard Goldschmidt (1878-1958) coined the term hopeful monsters in 1940 to describe the occasional two-headed calf or five-legged frog mutant that might find another like itself, breed, and somehow produce a new species. Strict Darwinian gradualists ridiculed the idea, but Gould and Niles Eldridge's 1972 punctuated equilibrium theory lent it some credibility.

Gould's hopeful monsters were the homeotic mutants of Drosophila melanogaster, notorious for their transformed body parts—wing to haltere, antenna to leg. Although the essay lacks the trademark baseball reference, it follows his typical talky style. An anecdote comparing homeotics to sideshow freaks opens the essay. Next comes the 'I couldn't have said it better' zinger: "Congenitally malformed bodies are nature's experiments, uncontrolled by intentional human art to be sure, but sources of insight nonetheless." Historical tidbits follow, introducing organisms mythical and otherwise with mismatched body parts, then a second nod to scientific thinking—it's not enough to observe nature; one must look experimentally for explanations and mechanisms.

Much of "Hopeful Monsters" deals with "a series of remarkable experiments" in the lab of Thomas Kaufman, at Indiana University, where noted geneticist Herman J. Muller once worked. Kaufman wasn't the only one spending every waking hour examining flies with legs on their heads. Gould named us all: Barbara Wakimoto, Tulle Hazelrigg, and me. As a result, we ended up in the index of his 1983 essay collection, Hen's Teeth and Horse's Toes.

Gould's mention meant the world to me, coming when I was at a career crossroads. That October, my PhD a few months old, I was half-time at Miami University teaching and doing research, and half-time writing science articles. Today, so-called alternative careers are, if not fully accepted, at least not vilified, as they were then. I once overheard another grad student proclaim, "If we don't get postdocs, we can always write, like Ricki."

"Hopeful Monsters" is fascinating to reread with two decades of hindsight, for it was written on the brink of—dare I use the dreaded term—a true breakthrough. Wrote Gould, "Homeosis is not a peculiarity of fruit flies, but seems to be a general phenomenon, at least in arthropods." And the essay ends with "an arresting fact": mosquitoes grow legs on their heads too. Very soon afterward, members of the Kaufman lab discovered the homeobox sequence. It was later found to control development in everything from flowering plants to worms, and when mutated causes disease in humans. The Kaufman lab would achieve everlasting fame in inspiring an episode of The X Files.

After "Hopeful Monsters" appeared, I wrote to Gould to thank him, confessing my love of science writing. To my utter amazement, he answered in a five-page handwritten letter, encouraging me. We corresponded for about a year, my husband kindly translating the baseball references. Alas, we never met. But his attention came at just the right time, convincing me that, to paraphrase poet Robert Frost, choosing the road less traveled would make all the difference. And it has. Stephen Jay Gould, who died May 20, made a difference to many people, and to the perception of evolutionary biology. He will be greatly missed.

Ricki Lewis (rickilewis@nasw.org) is a contributing editor and textbook author. 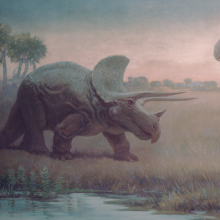