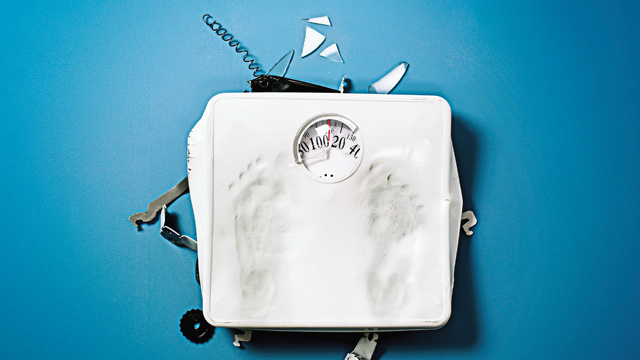 Obesity and associated health consequences are the greatest public-health challenges of our time. Worldwide, an estimated 1.5 billion people tip the scales as overweight—300–500 million of whom are obese—placing nearly a quarter of humanity at dramatically increased risk for diabetes, cardiovascular disease, and many types of cancer. While considerable scientific investments have barely begun to slow the expansion of our waistlines, they have yielded unexpected physiologic insights, perhaps the greatest of which is the discovery that proper metabolic function requires a previously unsuspected level of cooperation between the cells that make up each internal organ and that organ’s resident leukocytes.

For almost 2 centuries, the stereotypical appearance of basic human tissues—muscles with their long, cabled cells; kidneys with their cauliflower floret–shaped structures—have been a familiar staple of medical textbooks. But this depiction has proven to be deceptive. Only recently has cellular inventory of these tissues revealed...

Metabolic function requires a previously unsuspected level of cooperation between the cells that make up each internal organ and that organ’s resident leukocytes.

While macrophages’ role in inflammation following infection or injury has long been appreciated, the strict precision and temporal stability of their arrangements in healthy tissues, the conservation of these patterns across vertebrate species, and their rapid and precise reestablishment following depletion all suggest that active mechanisms exist to maintain the specific number and activation status of tissue macrophage populations at set points that ensure an appropriate complement of leukocytes at all times.

Indeed, recent work has begun to unearth the complex recruitment and retention networks dedicated to the maintenance and survival of resident leukocyte/macrophage populations. For example, many organs continually release chemokines that attract monocytes—macrophage precursor cells—and promote their survival. Needless to say, such sophisticated arrangements—especially in tissues where there is little risk of infection, such as the brain—are not easily explained by traditional theories of host defense. Why, then, would organs go to such lengths to outfit themselves with macrophages? 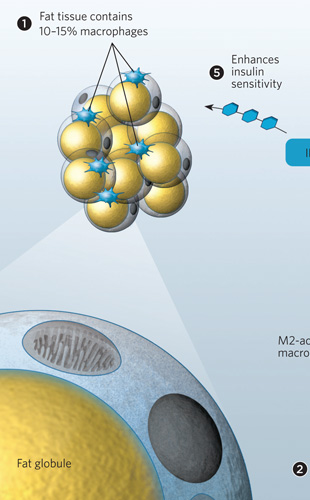 Normal Fat Tissue MetabolismView full size JPG | PDF© TAMI TOLPAStudies are beginning to reveal that resident macrophages shoulder critical, nonimmunologic tissue functions in the brain, gut, and bone marrow. In the brain, microglia are required for the development and function of neuronal synapses, for pruning synapses, clearing superfluous newborn hippocampal cells, mediating extracellular matrix remodeling, and directing synapse firing. Resident intestinal macrophages are necessary for the maintenance of gut epithelial integrity. They receive signals from damaged epithelial cells and release activation factors to nearby regenerative colon stem cells. Similarly, bone marrow macrophages act as critical components of the hematopoietic—or blood-cell forming—stem cell niche, retaining the stem cells in the marrow, preventing their inappropriate mobilization, and releasing them into circulation in times of need. Together, these observations suggest that, as a general principle, vertebrate tissues are critically dependent on resident tissue macrophages to perform their primary functions.

Macrophages are also present at the same unchanging percentages in healthy adipose tissue, both the white variety that stores globules of excess fat, and the brown, which burns fat stores in order to generate heat. Researchers are only just beginning to understand the role of resident macrophages in adipose tissue, but the concept of leukocyte set points—defined as a specific state observed in vivo to which the system returns following perturbation—could be useful in explaining the maintenance of healthy adipose tissue metabolism and its dysregulation in obese adipose tissue when the set point changes.

White adipose tissue is the primary site of long-term nutrient storage in vertebrates. It is also the largest endocrine organ in humans, secreting a variety of hormones termed “adipokines” that regulate systemic metabolism. Healthy white adipose tissue is characterized histologically by a predominance of adipocytes mixed with a smattering of adipose-tissue macrophages, eosinophils, and regulatory T cells (T regs).3,4 In nonobese individuals, interleukin 4 (IL-4) secreted by eosinophils maintains adipose tissue macrophages in an activation state that promotes and maintains proper adipocyte function.5

However, there are several modes of macrophage activation. The cells comprise a heterogeneous and plastic leukocyte lineage.1,6 While their physiologic roles are diverse and, in many instances, poorly understood, their activation states may be broadly divided into two categories: classical (M1) and alternative (M2). Classical M1 activation is an aggressive state in which macrophages attack and engulf bacteria or bacterially infected cells and secrete cytokines that promote inflammation, such as interferon-γ (INF-γ ) and tumor necrosis factor-α (TNF-α). M1 is the state most commonly associated with macrophages during infection. Alternative M2 activation describes the behavior of macrophages reacting to parasitic infection, but is also associated with wound healing, and results in the production of anti-inflammatory cytokines such as IL-10.7 However, when macrophages are present as normal tissue constituents, they are not activated by either bacteria or parasites, nor, once active, do they seek out these pathogens. The M1 and M2 classifications are useful in that they describe pro- (M1) or anti-inflammatory (M2) states. 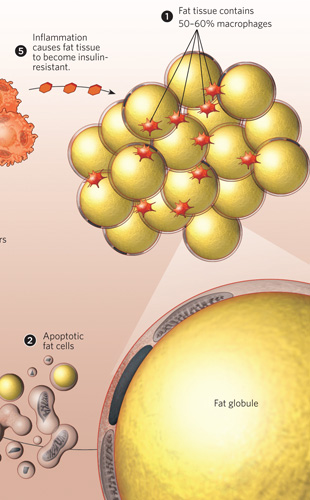 Adipose Tissue Metabolism in Obese Individuals
View full size JPG | PDF© TAMI TOLPAAlthough we know that pro-inflammatory M1 activated macrophages are present in obese fat tissue, and anti-inflammatory M2 activated macrophages are present in lean fat tissue, the exact nature of the macrophage-adipocyte signaling mechanism is unclear. Nor do we know what stimulates the eosinophils to release macrophage-supporting IL-4 in lean tissue or what makes eosinophil numbers diminish in obese tissues. However, the fact that these two states appear to be preserved in obese and lean adipose tissue points to the intimate interdependence between adipocytes and leukocytes for proper tissue function and, importantly, shows that disruptions in the tissue set point results in significant functional consequences for both the tissue and the organism as a whole.

In contrast to white adipose tissue, brown adipose tissue has little role in long-term storage of energy but is critically required for acclimation to cold temperatures via a process termed adaptive thermogenesis. This stems from brown adipose tissue’s ability to oxidize fatty acids via uncoupled respiration, which generates heat rather than ATP in the mitochondria. Indeed, active brown adipose tissue is capable of impressive metabolic feats: the 63 g of brown adipose tissue present in a typical adult human has been estimated, if fully activated, to be capable of catabolizing 4.1 kg of white adipose tissue each year. Until recently, it was believed that sympathetic nerves, which innervate both brown and white adipose tissues, detect dropping temperatures and coordinate the metabolic response to cold exposure. However, my (Chawla’s) research group at the University of California, San Francisco, has shown that the signal for the thermogenic response to cold is, in part, transmitted to brown adipocytes by alternatively activated M2 macrophages.8 Importantly, exposure of animals to progressively colder temperatures induces alternative activation of macrophages resident in both brown and white adipose tissue. As a result, these macrophages synthesize catecholamines and release norepinephrine, which causes white fat to convert its fat stores into metabolically accessible fatty acids and activates brown adipose tissue’s thermogenic capacity. In one final experiment, we artificially manipulated the macrophage set point in brown and white adipose tissues by injecting IL-4 or genetically reducing the macrophages’ ability to respond to the cytokine. Simply changing the levels of this one immune cytokine was enough to ramp up thermogenesis when more IL-4 was present, or to impair it when the response to the cytokine was diminished.8 While using IL-4 to activate brown fat may seem an attractive approach to shedding excess weight, cytokines are prohibitively expensive to make for long term use and difficult to deliver (they must be injected), and they may exacerbate or cause allergies. 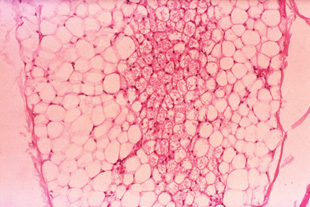 While the rigidity and precision of tissue set points are regulated by tight physiologic constraints, an organism’s survival under varying environmental influences necessitates constant adaptation. Tissue equilibria must then counteract these influences to restore homeostasis. With obesity now an omnipresent global concern, the influence of environmental stress—particularly in the form of nutrient excess—on white adipose tissue set points is an object of intense scrutiny. As nutrient levels exceed homeostatic requirements, adipocytes respond by increasing in number and in size. This nutrient excess, however, eventually causes cellular stress, which changes the leukocyte set point9 from around 10 percent macrophages in lean white adipose tissue to as much as 50–60 percent in the adipose tissue of obese mice.3 The percentage of protective M2 pathway-activating eosinophils also dramatically decreases in obese white adipose tissue.4 In turn, macrophages in obese mice are classically (M1) activated, swapping the anti-inflammatory M2 phenotype for one that is pro-inflammatory.10

To highlight the downstream physiological effects of such inflammation, one recent study showed that severe inflammation, as usually caused by pervasive bacterial or viral infection, results in a departure from the homeostatic set point in order to most effectively combat the disease. The immune system produces, mobilizes, and supports an impressive arsenal of immune cells, the majority of which rely on glucose for their energy requirements. To supply this high demand for glucose, an organism-wide signal is sent to all nonessential tissues to dampen their insulin sensitivity, thus making glucose more available in circulation where it can be prioritized for use by the immune system. Because of any given pathogen’s inevitable proliferative advantage, the speed and responsiveness of this reaction is of the utmost importance. Therefore, predetermined set points allow both rapid and accurate tissue recalibration and nutrient reprioritization after the infection has been cleared. This mechanism helps explain why chronic, low-level inflammation in adipose tissue results in permanent insulin resistance in many tissues of the body. When engorged and stressed fat cells begin to apoptose, they attract classically activated macrophages to remove cell debris. These cells activate and recruit more macrophages and other inflammatory immune cells, reinforcing the new numerical and phenotypic set point of leukocytes in the stressed fat tissue. As a result, adipocytes, in addition to liver and muscle cells, become resistant to insulin and no longer respond properly to the hormone, which normally initiates uptake of excess glucose from the blood stream. This occurs in an effort to limit storage of excess nutrients and relieve cellular stress.9 (See illustration above)

Disruptions in the tissue set point results in significant functional consequences for both the tissue and the organism as a whole.

If nutrient intake returns to homeostatic levels—or metabolic demand increases proportionately—the original tissue equilibrium is reestablished. If nutrient intake and expenditure are mismatched over a long period of time, however, a new set point is established in white adipose tissue, characterized by a chronic low-grade inflammation (mediated by the classically activated M1 macrophage population) and insulin resistance. This set point emerges as the key pathophysiological nexus responsible for the adverse health consequences of the new obese white adipose tissue set point.9

The wealth of literature on macrophages and other leukocytes in adipose tissue clearly defines functional roles for these cells in adipose tissue biology and establishes them as bona fide tissue constituents rather than immunologic transients. The physiologically normal set points in fat tissue can be shifted by chronic overnutrition; the pro-inflammatory obese adipose tissue itself, once established, demonstrates temporal stability and resistance to change. As in lean adipose tissue, any perturbation of leukocyte set points, whether numeric or phenotypic, disrupts the tissue’s new functional parameters.9

While significant progress has been made in defining leukocyte set points within adipose tissue with respect to obesity and insulin signaling, our understanding of leukocyte populations, phenotypes, and functional contributions in other tissues remains rudimentary. Indeed, our understanding remains incomplete even within adipose tissue: what defines a stable set point? How are predefined set points encoded? How can equilibria be manipulated to combat maladaptive shifts? Addressing these questions within adipose tissue offers the prospect of understanding how other complex tissues may adapt to changing environmental demands. The therapeutic implications of an improved understanding are profound because they suggest that pharmacologic targeting of macrophage activation, rather than simply inflammation, might be efficacious in treating the global obesity epidemic.

Justin Odegaard is a molecular pathology fellow at Stanford University School of Medicine, and Ajay Chawla is an associate professor at the University of California, San Francisco.