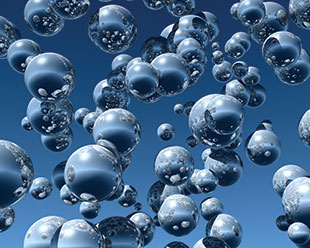 © KATRAN/SHUTTERSTOCKNanomedicine is poised to take the clinical world by storm. More than 150 polymers, liposomes, metals, and many other materials, with sizes ranging from 1 nm to 300 nm, are approved or under investigation to enhance drug delivery, as diagnostics and imaging agents, and in radiotherapy treatments for cancer, among other applications. Moreover, the materials are becoming increasingly sophisticated, as researchers learn how to functionalize nanoparticles and create complex multifunctional conjugates. Attaching polymer coatings to nanoparticles can reduce uptake by the immune system, for example, while molecules that target diseased tissue can be affixed to drugs to lower needed dosages. (See “Nanomedicine.”)

As developers engineer and test this “next generation” of better-targeted nanomedicines, they aim to characterize the particles’ physical and chemical properties, including size, charge, purity, and stability. But a nanomedicine is not simply a homogeneous population of identical structures; rather, it is a...

Nanoparticles often form complex agglomerates. Carbon nanotubes, which are sometimes used as drug delivery systems, often come with detailed characterization data specifying an average diameter, chirality, and length. But what you get from the supplier looks more like a cotton ball under an electron microscope. And when we characterized cerium dioxide nanomaterials as part of a risk/hazard study of the use of these nanoparticles as a fuel additive, we found that the solutions contained micron-size aggregates. These nanoparticles of cerium dioxide, claimed by the company to have an average size of 15–30 nm, weren’t nano at all!

Clearly, reporting just one size without information about the distribution and conditions of the measurement is misleading. Some investigations have even suggested that differently shaped nanoparticles may have different biodistribution and toxicity. These different effects will never be elucidated if biological results are analyzed under the assumption that all the tested particles are of one structure—the one specified by the supplier—when in reality the particles take on a wide range of shapes, sizes, and agglomeration states.

NCL conducts translational studies to help nanomedicine developers bridge the so-called “valley of death,” the period between academic research and clinical trials during which the vast majority of drugs fail. Over the past nine years, NCL has collaborated with more than 80 academic labs and companies to examine more than 300 nanomaterial formulations, and has helped put seven medicines into clinical trials. In doing so, we have accumulated tremendous knowledge about what works and what doesn’t for characterizing the physicochemical properties of nanomedicines.

Nanoparticles, because of their small size, require electron microscopy (EM) to measure their size and shape. However, because many biological compounds, such as liposomes and proteins, and engineered polymer nanoparticles such as dendrimers don’t sufficiently deflect an electron beam, they are invisible to EM without heavy metal staining procedures. For these “soft” particles, EM does not always provide a relevant measure of particle size.

One technique that can provide a measure of particle size in solution is dynamic light scattering (DLS), during which a laser beam is scattered off the nanoparticle and small fluctuations in the intensity of the scattered light are monitored. DLS is very sensitive to soft molecules such as polymers, proteins, and antibodies because they cause significant frictional drag that the technique detects.

Studies of mischaracterized nanomaterials can lead to erroneous results and contribute to confusion. And when nanomaterials are being used in medical products, this confusion can pose a real danger to patients. As more and more nanomedicines enter review for clinical trials, regulators are increasingly asking for physicochemical characterization data by several methods. At the NCL, we enthusiastically support the use of multiple methods based on different principles to measure each physicochemical property. Reliable, validated characterization data will provide a more complete picture of the nanomedicines in development and serve as a foundation for realizing the promise of these new technologies to diagnose and treat disease. 

Scott McNeil serves as the director of the Nanotechnology Characterization Laboratory (NCL) for Leidos Biomedical Research, Inc. and Frederick National Laboratory for Cancer Research. He coordinates the NCL’s preclinical characterization of nanotech cancer therapeutics and diagnostics.