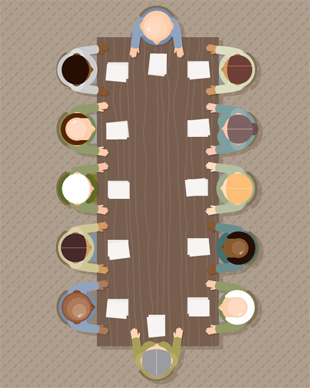 © BORTONIA/ISTOCKPHOTO.COMWhen geneticists take off their lab coats, leave the confines of their classrooms and workspaces, and venture into ethnic minority communities to share their work, they are fostering open discourse in a setting built on trust, understanding, autonomous decision-making, and participation. The creation of a “genetics table,” at which every party is welcome to discuss any and all emerging scientific and social issues related to genetics research, not only encourages inclusivity, but allows for frank, open discourse between ethnic minorities and researchers.

Controversial topics such as eugenics, cloning, scientific racism, and medical profiling are among those most likely to be broached by ethnic minorities. Long-held memories of the Tuskegee syphilis experiments and the more recent case of Henrietta Lacks’s cells being harvested without her consent—and subsequently used for profit—resonate within African American communities. (See “Debating Bioethics Openly,” The Scientist, July 2013.) With such an...

The same ethical issues are also relevant to biobanking, which raises concerns over the possibility of for-profit products being derived from volunteers’ samples. And while ethnic minorities may rightfully wish to focus the discussion on issues of medical mistrust, unethical protocols, and potential deception, genetics researchers can make use of this setting to share technological and scientific advances, and to explain how the participation of minority groups in genetics research proffers potential medical benefits and positive social impacts.

At the same time, inclusivity can be a double-edged sword. The prospects of finding out information about one’s genes, and understanding their relation to one’s ancestry, disease risk, and life expectancy, are all poised to become part of revolutionary improvements in the prevention and treatment of illness. However, knowing this information and grappling with its impacts on an individual and collective basis could very well create psychological stress, anxiety, and trepidation that geneticists may not be able to address within the purview of their research protocols.

Genetics researchers must view scientific and technological advances not only from the individual’s decision-making perspective, but also from a communal perspective, which entails consideration of the larger issues of race and ethnicity and the impact genetics applications could have on health disparities. Thus, policies that govern the creation of a genetics table ought to include the following:

Use a community-based participatory research framework (CBPR), which draws on academic and community partners to collaboratively address health concerns. A CBPR builds on existing strengths contained within the community and stresses the need for integrating and achieving equity and parity in research agendas with the goal of achieving equal benefits for all involved.

Form community advisory boards comprised of “guardians” who serve as gatekeepers—or leaders within their constituent community on a formal or informal empowered basis. These are key community individuals that scientists can approach directly in order to elicit support and engagement from within minority communities. Researchers should have frank discussions with community guardians on issues of development, implementation, and evaluation of their genetics projects and how best to culturally sensitize their research to bolster inclusivity
and encourage participation.

One way to create equitable discourse is to increase genetics literacy among the public. An invitation to a “genetics café,” an informal educational prelude to the more advanced “genetics table,” can be a means by which researchers first present summaries of their work to both the general public and minority communities. At these cafés, larger and more general conversations surrounding participation in genetics studies are likely to take place. Issues may include more general concerns about genetic disease–based trials, the purpose of the study, and advances expected to be attained from the study.

Benefits-sharing and remuneration in research applications

Not only do issues of shared values and incentive touch on social justice and health equity, they include monetary issues as well. When genetics-based benefits and dividends from institutions, such as biobanks, research labs, and private corporations, are not shared with minorities and their communities, it creates a greater divide and diminishes motivation for minority participation.

As genetic science matures and its applications advance to the level of personalized medicine, scientists must include ethnic minorities in such research and must consider their concerns about participation. Researchers need to be completely transparent about their motives and intentions for doing the study, fully explain benefits and risks to minority communities, and, in the event of creating new patents, genetics lines, or products from the fruits of their research, be willing to share those dividends with those who, after careful deliberation and discernment, agree to serve as research subjects.

The inclusion of ethnic minorities at a genetics table will aid in broadening the levels, domains, and scales of participation and equity in this ascendant scientific area. By exploring the concerns and issues that minority groups face when deciding whether to participate in genetic research initiatives, the promotion of science, social justice, and equity will ensue. 

Aaron Buseh is an associate professor of nursing at the University of Wisconsin–Milwaukee, where he teaches health policy and conducts health services research with a focus on underserved/vulnerable populations. He is also chair of the university’s institutional review board.