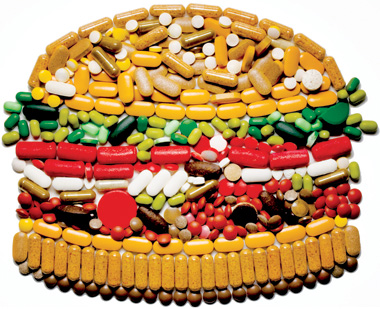 For as many decades as antibiotic resistance has thwarted the cure of bacterial infections, scientists have pondered the origins of resistance genes and how they became such a problem. Fingers were pointed squarely at the overprescription of antibiotics in human medicine—and rightly so, as early on, these drugs were liberally utilized for every imaginable malady without concern for the possible consequences. Not long after their discovery, however, these miracle drugs were applied not only to sick humans and animals, but to healthy ones as well.

Nowhere is this practice more prevalent and controversial than in animal husbandry, where animal feeds laced with small amounts of antibiotic are provided over extended periods of rearing. Labeled as “growth promotion” and employed primarily in large, concentrated feedlots for poultry, swine, and cattle, this nontherapeutic application appeared to fatten the animals faster, prevent rampant herd disease, and help bring healthy...

While US farmers and other stakeholders have argued tenaciously for the continuation of subtherapeutic dosing, Europeans adopted the “precautionary principle,” instituting sequential bans on the practice beginning in the mid-1990s. Arguments on both sides of this issue continue to the present day, but evidence of the negative consequences of low-dose antibiotic feeding has been mounting. Since 1976, several persuasive scientific studies have illustrated how animals fed low-dose antibiotics not only propagate resistant bacteria, but spread these resistant strains to farmers, their families, community residents, and ultimately, hospitalized patients. Particularly worrisome is the continued use in animals of antibiotics that are close structural relatives of those that are used in human medicine.  It is feared that, in time, these drugs will lose potency as bacteria express “cross-resistance” to the related drugs.

Some researchers have countered that the resistant bacterial strains found in serious hospital infections bear little or no resemblance to the strains found in farm animals. They argue that eliminating antibiotics on the farm would harm animal health, result in economic loss, and have little or no impact on reducing human morbidity and mortality. However, these rebuttals overlook the inherently promiscuous nature of bacteria—in particular, the transferable genetic elements they often carry (e.g., bacterial plasmids, transposons, phages) that can readily share DNA segments bearing resistance genes. They pass among strains, species, and even diverse bacterial genera, rearranging and accumulating even more resistance genes. Tracking the evolution of such complex bacterial exchanges from food animals to people poses a daunting challenge, making definitive proof elusive. But we argue that the preponderance of evidence, coupled with a diminishing pipeline of new antibiotics and the appearance of multidrug-resistant “superbugs,” warrants closer scrutiny of how and where we are using these antimicrobials—and the adoption of stricter measures of control.

While still declining to issue an all-out ban on subtherapeutic feeding, the US Food and Drug Administration has taken measured steps in the right direction. First, in 2005, the agency prohibited the use of fluoroquinolones in poultry, and just this January, it prohibited certain off-label uses of cephalosporins in livestock generally. It is a matter of concern, however, that the FDA does not address the ongoing use of penicillins and tetracyclines as growth promoters. Thus, we are still a long way from the steps needed to safeguard precious classes of drugs for effective treatment of human disease.

Judicious surveillance in Europe in the decades following the bans on antibiotic use in animals has shown that the emergence and spread of resistant bacteria can be controlled and even reversed. Alternatives to antibiotics in animal husbandry in these countries, including improving hygiene practices and reducing overcrowding, need to be more fully explored for implementation in the United States.

Bonnie M. Marshall is a senior research associate in the Center for Adaptation Genetics and Drug Resistance at Tufts University School of Medicine in Boston. Stuart B. Levy MD is the Center director, and a Tufts University professor. Both are actively involved in the Alliance for the Prudent Use of Antibiotics. For more information about their views on the use of antibiotics in animal husbandry, see B.M. Marshall and S.B. Levy, Clinical Microbiology Reviews, 24:718-33, 2011.