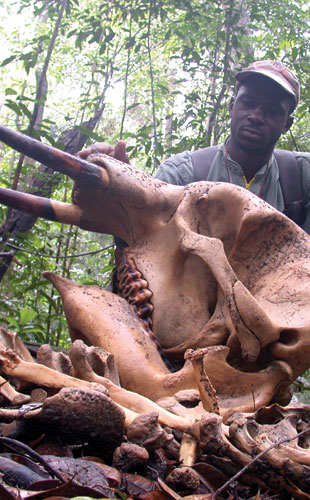 POACHED: A young elephant shot by poachers near Rabi Reserve in southern Gabon. Although it has a bullet wound in its skull, the elephant evidently escaped and later died, because its tusks haven’t been removed.© RALPH BUIJYou couldn’t have witnessed the terrible carnage at Bouba N’Djida National Park in Cameroon and not be alarmed about the future of biodiversity. In March 2012, armed poachers invaded the park and slaughtered more than half of its 400 forest elephants for their valuable ivory tusks.

Fortunately, not all protected areas are suffering such incursions. In the Brazilian Amazon, where I’ve worked as an ecologist for the past 17 years, parks are helping to slow illegal logging and forest burning in vulnerable frontier areas. Likewise, in northeastern India, my doctoral student Nandini Velho is finding that protected parks are doing a much better job than surrounding community lands in sustaining vulnerable...

Protected areas now span an eighth of the Earth’s land surface. Will they be a cornerstone for sustaining biodiversity, or a failed experiment, overrun by humanity’s growing demands for land, food, and natural resources?

With help from more than 200 field biologists, I recently coordinated one of the largest-ever studies of the biological health of protected areas, surveying reserves across the African, American, and Asia-Pacific tropics. Our verdict? About half of the parks we studied are doing reasonably well, but the other half are suffering (Nature, 489:290-94, 2012).

Those reserves are losing not just a few species, but are plagued by sweeping declines in species abundances. Many reserves now have fewer top predators, large-bodied animals, specialized birds, amphibians, freshwater fish, and old-growth trees than they did 2 or 3 decades ago. Concurrently, they’re gaining invasive animals, weeds, and disturbance-loving plants such as forest-choking lantana and fire-loving gamba grass. Even human diseases within some protected areas are increasing.

These reserves are in so much trouble in part because they have limited on-the-ground protection—guards tasked with protecting the parks are too few, too poorly funded, or too poorly supported legally to control major threats. The biggest direct threats to reserves are habitat disruption from illegal deforestation, logging, fires, and overharvesting caused by chronic poaching or overexploitation of fuel wood and other natural products. Investing in protected areas to limit these critical threats could pay off.

A striking conclusion of our study, however, was that what happens around reserves seems nearly as important as what goes on inside them. For example, 85 percent of the reserves we studied lost part or all of their surrounding forest cover in recent decades, whereas just 2 percent have gained surrounding forest. In some places, farmlands or urban sprawl have marched right up to the borders of reserves.

Protected areas are like mirrors—reflecting the health of their immediate surroundings.

This demonstrates that protected areas and their biodiversity are intimately connected to their surrounding landscapes. If the habitats surrounding a reserve are trashed—as often happens—then the perils of isolation take over. Species are cut off from life-giving immigration and gene flow, or are persecuted when they stray beyond the margins of reserves. Local extinction is a frequent result.

In addition, environmental threats immediately outside protected areas have a way of penetrating inside them. For example, a reserve encircled by illegal logging, mining, and poaching typically suffers those same threats, to a lesser degree, inside its borders. Protected areas are like mirrors—reflecting the health of their immediate surroundings.

We can’t simply set aside nature reserves and forget about their surroundings. We need protected areas to be as large as possible, because bigger reserves are more resistant to outside threats. We should also establish buffer zones around reserves, to help shield them from hostile surrounding land-uses; and stop reserves from becoming isolated wherever possible, by maintaining substantial reserve connectivity to other forested areas. We also need to promote less-damaging land uses near reserves by engaging and benefiting local communities.

These will be serious challenges in a world struggling to meet the demands of a growing human populace. But if we want tropical protected areas to maintain their spectacular biological richness, we can’t ignore these burgeoning external threats. 