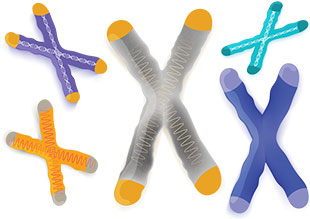 © ISTOCK.COM/TTSZBecause age is the largest risk factor for cancer, as the life expectancy of the world’s population continues to increase, cancer incidence is projected to rise dramatically. A 2011 report on Global Health and Aging released by the National Institutes of Health and World Health Organization predicts a tripling of the number of people aged 65 or older to 1.5 billion by 2050, and the annual number of new cancer cases is projected to reach 27 million by 2030. Undoubtedly, alleviating the diseases and disabilities associated with an aging global population will require the development of new anticancer approaches to avoid economic and humanitarian calamities.

Cellular immortality is a hallmark of cancers that distinguishes them from normal tissue. Every time a normal somatic cell divides, the DNA at the ends of its chromosomes, called the telomeres, gets shorter. When the telomeres shorten too much, an alarm signal...

Because the presence of a TMM is an almost universal characteristic of cancer cells, and experimentally repressing these mechanisms results in cancer cell senescence or death, TMMs may be useful targets in treating cancer. Indeed, several therapies targeting the well-described telomerase-based pathway are in the advanced stages of clinical development. There are currently no ALT-targeted therapeutics, however, largely because this process is less well understood.

There are about 1.4 million new cases and 820,000 deaths globally due to ALT cancers every year.

In contrast to telomerase-driven telomere lengthening, which does occur in the stem cells of healthy tissues and organs, ALT activity is not found in normal human postnatal tissues—a fact that would allow for more-effective dosing with minimal side effects. And based on the conservative estimate that 10 percent of cancers employ an ALT strategy to achieve cellular immortality, there are about 1.4 million new cases and 820,000 deaths globally due to ALT cancers every year. These include some of the most clinically challenging cancers to treat, such as pediatric and adult brain cancers, soft tissue sarcoma, osteosarcoma, and lung cancers. Clearly, targeting ALT is a very attractive strategy in the development of novel cancer therapies.

Moreover, as with any cancer therapy, there is the potential for development of resistance against telomerase-based strategies to defeat cancer. Several in vitro studies report that human cancer cell lines can overcome loss of telomerase by activating ALT. Inhibition of telomerase in mice has also been shown to cause existing tumors to activate the ALT pathway as telomeres shorten with treatment. Importantly, some human tumors have both ALT and telomerase activity, although not necessarily simultaneously within the same cell. It is therefore plausible that telomerase-dependent cancer treatments will introduce selective pressure in tumors to activate the ALT pathway and/or to select for cells already using ALT within the tumor, which makes development of ALT-specific therapies imperative for the success of anticancer approaches targeting TMMs.

Telomeres consist of repetitive hexameric DNA sequences (5’-TTAGGG-3’) intertwined around a group of proteins collectively known as the shelterin complex. These structures form a protective cap at the ends of every chromosome. Because all telomeres contain the same repetitive DNA, new telomeric DNA can be generated by copying another molecule that contains the telomeric sequence via homologous recombination.

One of the hallmarks of ALT cancer cells is that they contain large amounts of telomeric repeat DNA that are dissociated from chromosomes. These extrachromosomal sequences, which can be linear or circular, may serve as the template for ALT-mediated telomere elongation. The template can also be another telomere, such as the end of a sister chromatid, or even the same telomere looping back on itself.

ALT activation is associated with loss of important chromatin remodeling proteins at the telomeres, possibly allowing the DNA damage response and homologous recombination machinery to initiate ALT activity. ALT activation is also accompanied by abnormal association of some nuclear proteins with telomeres, as well as recapitulation of some recombination pathways used in meiosis. ALT and ALT-like mechanisms seem to be evolutionarily conserved from yeast to worms to humans. In fact, some yeast strains contain mitochondria with linear genomes and telomeric-like repeat sequences at their termini. These mitochondrial genomes maintain their telomeres via a recombination-based mechanism resembling the one found in human cells employing ALT. This raises the intriguing possibility that ALT evolved out of necessity to maintain stability in linear genomes after they transitioned from circular form, before the emergence of telomerase as a TMM.

Studies in mice suggest that the recombination-mediated ALT mechanism is the main driver behind the telomere lengthening observed in the early stages of embryonic development. Telomere lengthening by ALT may also play a role in the reprogramming of murine somatic cells into induced pluripotent stem cells and the generation of embryonic stem cells by somatic cell nuclear transfer. So cancers that activate the ALT mechanism may be tapping into a key biological phenomenon to achieve immortalization and cause harm. Therefore, a better mechanistic understanding of the ALT pathway could lead not only to more efficacious cancer therapies, but also to a better grasp of genomic biological evolution.

The development of ALT-targeted therapies is quite challenging, however. Unlike the telomerase pathway, the ALT mechanism has no known specific enzyme activity, and all the enzymes identified to date that play a role in ALT are also essential to normal cellular pathways. The presence of ALT activity has often been inferred from detecting telomere-related phenotypes, such as long and heterogeneous telomere length distributions or ALT-associated promyelocytic leukemia nuclear bodies (APB), which indicate the abnormal presence of telomeres inside a complex formed from otherwise ubiquitous nuclear proteins. (See “Going Long,” The Scientist, April 2014.) These markers are not entirely satisfactory, as they can sometimes yield inaccurate results and are not practical for high-throughput applications or clinical laboratories.

A key step towards the development of ALT-targeted cancer therapeutics and diagnostics was the discovery of the first ALT-specific molecule, the telomeric C-circle (Nat Biotechnol, 27:1181-85, 2009). C-circles are an unusual type of circular DNAs that are created from telomeres. The level of C-circles in cancer cells accurately reflects the level of ALT activity, and this biomarker can be found in the blood of patients who have bone cancers positive for ALT activity. The development of the C-circle assay as well as improvements to the APB assay could, in the near future, make it feasible to perform robust high-throughput screenings to search for modulators of the ALT pathway, which will greatly speed the pace of discovery in this field. Further research will no doubt lead to a more complete mechanistic understanding of this phenomenon and to the first ALT-specific therapies against cancer. Controlling ALT could very well help delete the burden of cancer from society.

Haroldo Silva is lead scientist in the oncology research group, OncoSENS, in which David Halvorsen is a research associate, at the SENS Research Foundation. Jeremy Henson is a practicing clinician and the head of the Cancer Cell Immortality Group at the Prince of Wales Clinical School at the University of NSW in Australia. Henson discovered the C-circle biomarker and invented the C-circle assay when he was in the Reddel laboratory at the Children’s Medical Research Institute in Sydney, Australia.