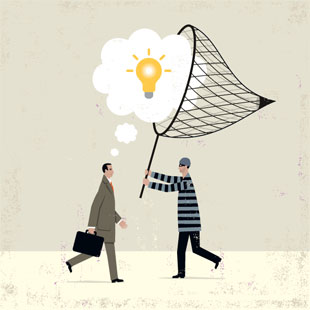 © MARK AIRS/ISTOCKPHOTO.COMThe National Science Foundation (NSF) announced on March 8 that it is investigating nearly 100 cases of suspected plagiarism in a year’s worth of agency-funded proposals. Though the amount of funding dished out to these projects is unclear, extrapolating from the NSF’s 2011 budget, it could represent more than $96 million.

Unfortunately, the problem isn’t limited to the NSF. Retractions in academic publishing have skyrocketed—up 10-fold in the past three decades—with plagiarism and duplication (a kind of self-plagiarism) at the root of about 25 percent of those retractions. In the same month that the NSF launched its investigation into the suspect proposals, primatologist Jane Goodall’s forthcoming book was delayed by publishers after early reviewers discovered plagiarized passages.

Outside of academia the problem of plagiarism continues to generate headlines and scandals for politicians. In Germany, two prominent cabinet members have been forced to step down due...

Most worrisome, all of these high-publicity scandals came to light in the past 3 years, due in large part to heightened public awareness of plagiarism and increased access to  plagiarism-detection tools, suggesting that such activities are nothing new; they’ve just become easier to expose.

In all of these cases, there is a common thread. Whether it’s a government agency or an academic publisher, the organization usually does not face the issue of plagiarism head on, instead relegating the subject to closed-door conversations and relying on luck and hope—until faced with a scandal and forced to clean up the mess. In most cases, this has involved not only the practical matter of finding and removing plagiarized content, but also dealing with public-relations issues and rebuilding public trust. Careers are ruined and reputations forever tarnished.

And while there are notable measures being taken—by the Nature Publishing Group and many other publishers, as well as by some government agencies and research departments—to maintain research integrity, the question remains: Why doesn’t every organization employ active defenses against plagiarism? In the age of Google, there’s no reason why readers should discover plagiarism before a publication’s editors do.

Plagiarism-detection software tools are well tested, widely available, affordable, and simple to use. Though they still rely on human analysis, they can greatly expedite the process of validating the originality of submitted work. Indeed, publications that have mandated the use of plagiarism-detection tools as part of their review process and author guidelines—specifically requesting that authors run their submissions through such detection software to avoid pulling words from their own previous publications, as well as to catch any unsourced quotes—have seen retractions decrease. For example, the Landes Bioscience journal Cancer Biology and Therapy rejected more than 221 articles for plagiarism in 2012 alone, but has yet to issue a single retraction since implementing rigorous screening protocols using iThenticate, a plagiarism-detection service used by many scholarly publishers and research departments.

Too many organizations, however, are ignoring the issue. According to an October 2012 survey by iThenticate, one out of every three scholarly editors says they encounter plagiarism regularly, yet, according to the same survey, more than half of researchers don’t check their own work, leaving instances of duplication—even accidental ones—to be flagged by editors.

This makes no sense. The time when it is easiest to detect and handle plagiarism is before a proposal is funded or an article or study made publicly available. Grantors and scholarly editors shouldn’t wait for a crisis before setting up a system to prevent plagiarism. Even if it is possible to repair trust and undo most of the damage of a plagiarism scandal, it is impossible to get back the wasted publication space, missed funding opportunities, and a clean professional record. Instead, a sound defensive strategy needs to be in place well in advance, and that strategy should include a clear message about the consequences for those who breach it.

Jonathan Bailey is a plagiarism and copyright consultant who has been working in the field since 2005. He blogs at Plagiarism Today, as well as at The iThenticate Blog, for which he is a paid contributor.