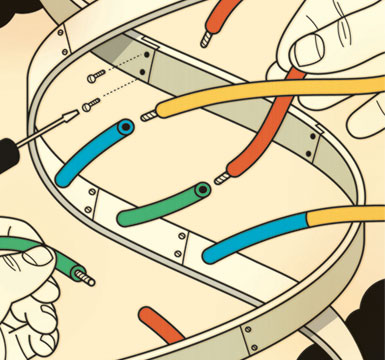 © HARRY CAMPBELLAs the do-it-yourself biology (DIYbio) community has grown, so too have the concerns about the potential dangers and reach of the DIYbio movement—in particular with regard to synthetic biology. A sampling of headlines in major newspapers and magazines over the past year include: “Amateurs Are New Fear in Creating Mutant Virus,” “D.I.Y. Biology, on the Wings of the Mockingjay,” and “Hacking the President’s DNA.” But much of this alarm is overblown, as critics overestimate the current abilities of the DIYbio movement and underestimate the ethics of its participants, who can range from PhD-trained scientists to the true amateur who has little professional training.

Furthermore, while concerned parties call for government oversight, the DIYbio community has already proven to be proactive in addressing biosafety and biosecurity concerns. In December 2011, Genspace, the first community laboratory to open in the United States,...

The DIYbio community has proven to be proactive in addressing biosafety and biosecurity concerns.

Furthermore, the advent and expansion of the community laboratory model is influencing the discussion of biosafety and biosecurity in part because an individual operating in his or her home faces different issues and potential risks than someone working in an organized lab space. Community labs also serve as meeting places to discuss these issues and provide courses and hands-on experience. (Read more about the flourishing of community laboratories in “Biology Hacklabs.”)

So, flashy headlines and naive criticism aside, how serious a threat is the DIYbio community really? We should remember that the one terrorist attack using a biological agent in the United States—the 2001 anthrax letters—was carried out by an employee of a national laboratory with all of the security afforded to it by the US government. It was not carried out by a DIY biologist working at home or in a community lab. In fact, those wishing to cause harm would find it difficult to operate in an environment as open and transparent as the DIYbio community.

Citizen scientists are dedicated to education, innovation, and problem solving, using a new model in the human spirit of curiosity and exploration. Community laboratories are also beginning to change the way we educate our children. Genspace serves as a node for the Urban Barcoding Project, which provides extramural learning opportunities for New York City schoolchildren, grades K–12. (See “Barcode High,” The Scientist, December 2011.) Projects like this are exciting the next generation of scientists, engineers, and innovators in ways that traditional curricula cannot. Whether or not the movement produces scientific breakthroughs or technological innovations is still an open question, but no one would have predicted that a few friends tinkering with computers in their garage would produce one of the wealthiest companies that ever existed.

The citizen-science movement is rapidly expanding, and some would argue that it cannot be stopped. There is no evidence to suggest that these efforts pose undue risk to society, and the DIYbio community holds the potential to improve science education in the U.S., which was ranked 25th in math and 17th in science worldwide in a 2012 report from Harvard University’s Program on Education Policy and Governance. Public policy should be written to enable the exploration and innovation of the DIYbio community—not to limit its reach based on overblown fears of the unknown. 

Todd Kuiken is a senior research associate in the Science and Technology Innovation Program at the Woodrow Wilson International Center for Scholars where he focuses on biosafety and biosecurity aspects of synthetic biology.