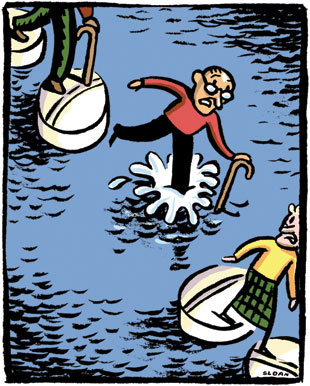 What is the greatest menace associated with age-related diseases? Hypertension? Obesity? High cholesterol? No. It’s simply the number of years an individual lives.

Similar patterns are observed for cancer, type 2 diabetes, and Alzheimer’s disease. National Institutes of Health data indicate that the risk of dying from these diseases accelerates logarithmically by approximately 100 to 1,000-fold between ages 35 and 85. No wonder so many elderly people deal with several age-related diseases simultaneously, and can face additional complications from taking multiple drugs, prescribed separately to treat...

This reality is further aggravated by the fact that many carefully conducted clinical trials exclude patients over the age of 65 as well as patients taking multiple drugs. This means that while the majority of drugs are consumed by the elderly, there is little to no “evidence-based medicine” to inform us about the safety of polypharmacological therapy for this population.

And an even more fundamental problem looms.

Gerontologists have made significant progress in understanding the biology of aging. They’ve identified pathways involved in normal aging, flagged genes associated with increased longevity, and even extended healthy life span by genetic means, nutritional manipulation, or through drugs in a variety of animal models, including mammals.

One conclusion from these studies is that the biology of a young body is substantially different from that of an old body. Not every treatment that works in the young will work or be safe in the elderly.

Estrogen therapy for postmenopausal women exemplifies this. The Women’s Health Initiative terminated its landmark study on estrogen replacement because study participants were showing higher-than-expected levels of breast cancer, cardiovascular disease, and cognitive decline. In retrospect, many mechanistic studies on rodents have used young, ovariectomized female mice as models to induce cardiovascular disease, stroke, or other diseases relevant to human females. In that research, estrogen seemed protective. However, when those studies were repeated in older, postmenopausal female mouse models, estrogen therapy was detrimental. The fact that a single drug like estrogen did not show anti-aging properties or protections opens the possibility that this holds true for many other approved drugs used to treat chronic conditions associated with aging.

The increased use of statins to treat cardiovascular disease—one of the biggest contributions to mortality in the Western world (~40 percent)—is another example. There is no doubt that statins have decreased the occurrence of cardiovascular events and mortality. And recent recommendations have emerged that may lead to even more people being treated with this drug class.

However, statins consistently did not change overall mortality! How does this math work? If statins reduce a major cause of mortality, but do not change overall mortality, it suggests people on statins die from other causes. Indeed, we and other researchers have shown that statin use significantly increases diabetes risk, supporting the notion that these drugs may actually contribute to other diseases of aging (Diabetes Care, 32:1924-29, 2009).

In the statin case, it is important to note who is pushing the agenda. Because of great progress in preventing and treating cardiovascular disease, cardiologists have deepened the belief that heart health is central. Cardiologists also inform us that decreased blood pressure is good for the heart. But studies have shown that blood pressure status and cognitive function in the elderly are related. Low blood pressure in elderly people is associated with reduced cognitive performance, while mild hypertension may help prevent cognitive decline (Am J Hypertens, 16:818-26, 2003). Other studies have suggested that treating high blood pressure with some drugs may accelerate cognitive decline (Amer J Ther, 17:358-64, 2010).

There is little to no “evidence-based medicine” to inform us about the safety of polypharmacological therapy for the elderly.

So, if there are real risks associated not just with multiple drugs but with any single drug, what solutions must we consider?

First, in order to ensure safety and effectiveness, a significant percentage of elderly subjects (at least 50 percent of the study sample) needs to be included in clinical drug trials for any age-related disease. Another approach is to design a sub-trial on the elderly.

Second, when a drug is promoted by a medical professional group, its effect on overall mortality needs to be assessed. It has to be clear that this drug is not merely exchanging one disease for another.

Third, studies of exceptionally long-lived people, such as the LonGenity and Longevity Genes Project at Albert Einstein College of Medicine, which includes healthy centenarians and their families, have identified functional genetic changes associated with such longevity. The goal of such research is to translate these findings into drugs that can extend healthy life span for people who do not share this genetic pattern, and some drugs based such projects are currently in clinical trials.

Lastly, and most important, developing drugs that are based on an understanding of the biology of aging has the potential to provide therapies for the prevention of many age-related diseases. Such a strategy may promote healthy life spans and significantly reduce the financial burden of late-life illness and end-of-life care.

Nir Barzilai is a professor of medicine and genetics at Albert Einstein College of Medicine of Yeshiva University in New York City and director of Einstein’s Institute for Aging Research and its two Centers of Excellence (NIH-Nathan Shock Center and Paul F. Glenn Center for the Biology of Human Aging Research). He is also the co-scientific director of the American Federation for Aging Research. His research focuses on mechanisms of aging, including the genetic determinants of life span and the role of nutrients in extending life.