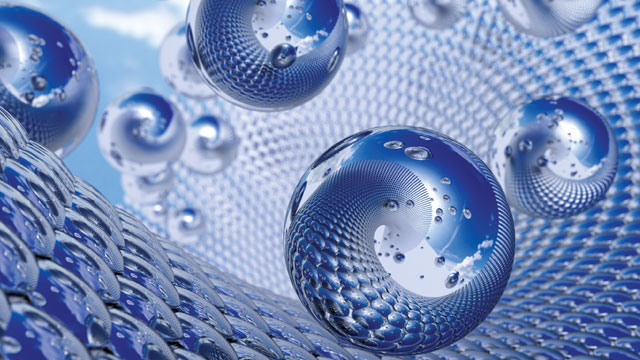 Short drug circulation times and difficulty localizing therapy to tumor sites are but two of the challenges associated with existing cancer treatments. More troubling are the issues of drug toxicity and tumor resistance. Toxicity can cause major complications, such as low white-blood-cell counts or heart fail­ure, that necessitate cessation of treatment. The tissue damage inflicted by some therapies can even be fatal. And evolution of drug resistance by tumors accounts for the vast majority of cases in which treatment fails. Given these and other issues associated with treatment safety and efficacy, scientists are applying tremendous effort toward the utilization of nanomedicine in the fight against cancer.

Nanotechnology-based therapeutics have exhibited clear benefits when compared with unmodified drugs, including improved half-lives, retention, and targeting efficiency, and fewer patient side effects. Researchers have already made progress with chemotherapeutic nanomedicines in the clinic. Several compounds that are in various stages...

Cancer nanomedicine possesses the versatility required to uniquely overcome some of the most challenging impediments to treatment success.

On the preclinical front, several nanomaterial formulations have shown promise. Single-agent nanoparticle delivery, both actively and passively targeted, has been demonstrated with a host of platforms using silica, polymer, metal, and carbon-based materials.

Researchers recently reported multidrug delivery using nanoparticles to mediate resistance in relapsing cancers and to improve triple-negative breast cancer treatment efficacy. Other recent approaches have included layer-by-layer siRNA and doxorubicin delivery for breast cancer therapy, simultaneous loading of small interfering RNA (siRNA) and tumor-penetrating peptides against ovarian cancer, as well as sequential administration of multiple types of nanoparticles for pancreatic cancer treatment (Adv Funct Mater, doi:10.1002/adfm.201303222, 2014). These exciting approaches have served as a foundation for the next phase of cancer nanomedicine in the clinic—the rational design of nanomaterial-drug combinations.

Until more nanoparticles are validated in the clinic, however, the impact that nanomedicine may have on cancer treatment has yet to be fully realized. In order for chemotherapies modified using nanotechnology to profoundly change hematological and oncological practice, the application of engineered nanomedicines must be paired with emerging strategies to rationally design nanotherapeutic combinations. This is critical because combinatorial therapy is an efficient way to simultaneously address the barriers to treatment success, and it is widely used in treating cancer and infectious diseases.

Current clinical methodologies for combinatorial drug design include additive treatments that combine two or more drugs at their highest tolerable but still efficacious dose, although the synergistic effects among drugs cannot be taken into account using this additive approach. As the field gradually embraces the use of nanoparticles to deliver multiple compounds with different targets, a move away from additive dosing is necessary. This raises several important questions. For example, silencing genes to combat resistance, mediating apoptosis, and allowing vascular access are each pathways worth targeting, but what if multiple pathways are targeted at the same time to comprehensively attack the tumor? How will dosing be determined? How will the dosages of each drug be adjusted if efficacy is improved but toxicity is worsened? More importantly, how will “optimization” be defined, especially if the desired outcome is to simultaneously stop tumor growth, eliminate resistance, maintain white blood cell counts, and achieve a host of other objectives?

The next phase of cancer nanomedicine in the clinic is the rational design of nanomaterial-drug combinations.

An attempt to optimize any one of these conditions will inevitably affect the others. Furthermore, these conditions vary from patient to patient, so phenotypic personalized medicine will be required. In addition, these issues create a parameter space that is too large to be individually tested and can result in an arbitrary dosing scenario. For example, a combination of six candidate therapeutics with 10 possible concentrations represents a minimum of 1 million possible combinations. Identifying a solution that rapidly converges on a defined set of phenotypic outcomes is a challenge that faces both unmodified drug administration and drug delivery by nanoparticles.

To move beyond short-term cancer management—or single outcomes, like delaying tumor growth using a nanoparticle drug formulation—and to enable long-term or potentially permanent disease management, the field of nanomedicine will inevitably need to be paired with advanced strategies to rapidly determine dosing conditions that can simultaneously optimize for efficacy and safety. One promising route is the field of feedback system control (FSC), which relies on phenotypic responses instead of trying to interrogate cellular pathways, their individual protein components, or a spectrum of genotypic responses. One example is the use of a search algorithm in a feedback loop that can guide the formulation of rational drug combinations, both unmodified and nanotherapeutic. (See PNAS, 105:5105-10, 2008; BMC Systems Biology, 5:88, 2011.) Remarkably, this approach can be used for in vitro studies with cell lines and primary cells, and for preclinical and even clinical validation. And because FSC utilizes outcomes to iteratively suggest new possible combinations before rapid convergence—in tens of trials versus a million or more—toward an optimal combinatorial dose, pharmacokinetics and pharmacodynamics are inherently accounted for with this approach. Furthermore, because combinations will vary from patient to patient, FSC will help personalized nanomedicine dosing on a case-by-case basis.

In sum, cancer nanomedicine possesses the versatility required to uniquely overcome some of the most challenging impediments to treatment success. Rationally designing nanotherapeutic combinations using rapid convergence solutions such as FSC represents a promising pathway from cancer management towards cancer elimination.

Dean Ho is a professor of oral biology and medicine at the University of California, Los Angeles (UCLA) School of Dentistry, where he codirects the Weintraub Center for Reconstructive Biotechnology. He is also a UCLA professor of bioengineering and a member of the Jonsson Comprehensive Cancer Center and California NanoSystems Institute. In December 2013, Ho coauthored a review of the translation of cancer nanomedicine to the clinic (E.K. Chow, D. Ho, Sci Transl Med, doi:10.1126/scitranslmed.3005872, 2013).