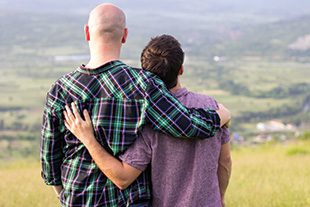 © ALEKSANDAR STOJKOVIC/SHUTTERSTOCKThe biology of human sexual orientation is a fascinating and important area of basic research, but given the intensity of the worldwide social, political, and ethical debates over this topic, it is bound to have consequences outside the lab as well. In considering the social ramifications of this work, it’s instructive to look back at the role that science has played in the quest for lesbian, gay, bisexual, and transgender (LGBT) rights and visibility in the United States over the past 20 years. To ignore the historical record of this shift in public opinion, or even to stifle further research on the basis of unfounded hypotheticals, is a disservice to both science and human rights.

My involvement in sexual orientation research began in July of 1993, when my lab at the National Institutes of Health reported in Science that the maternal but not paternal male relatives...

While the claims of our 1993 paper were modest, the reaction was explosive. Headlines referring to our work appeared on the front pages of virtually every major newspaper in the U.S. and across the globe. Time and Newsweek ran pictures of my laboratory. TV and radio stations reported the news, and our work even contributed to the inspiration for a Broadway play (Jonathan Tolins, The Twilight of the Golds, 1993).

Although the research clearly struck a chord, the actual reactions were divided. Some rejoiced because they believed that the findings would bolster the public acceptance and legal status of gay people by showing that sexual orientation was an immutable characteristic, similar to height or eye color. But others lamented the findings, fearing they would be misused to increase discrimination by positioning homosexuality as a genetic disease, allowing prenatal selection against fetuses carrying a gay marker, or surreptitious genetic testing by the military, employers, or insurers.

So what actually happened? Has the genetic research that began two decades ago had a beneficial effect on society, or has it been detrimental?

Clearly, none of the direst predictions have materialized. Same-sex orientation has not been medicalized, nor has there been prenatal or surreptitious genetic testing. On the legal front, the results have been used in several state and federal cases to bolster the argument that sexual orientation is immutable, one of three criteria for heightened constitutional scrutiny of discriminatory laws. It comes as a relief, however, that the Supreme Court, though it has yet to weigh in on the issue, decided to instead strike down the federal portion of the Defense of Marriage Act on the basis of equal protection under the law, thus protecting people’s rights on the basis of fundamental principles of equity and justice rather than any scientific argument.

Ultimately, the most important social impact of research on sexual orientation may be its effect on public opinion. In this regard we are fortunate to have access to extensive data (Public Opinion Quarterly, 72:291-310, 2008; Social Science Journal, 50:603-15, 2013). Since 1977, Gallup has conducted large, representative national surveys that contain various items about sexual orientation, including the question, “In your view, is homosexuality something a person is born with or is homosexuality due to other factors such as upbringing or environment?”

In 1977, only 13 percent of respondents believed people were “born with” homosexuality. But by 2013 that figure had increased to 47 percent. In parallel, the percentage of people who believed that same-sex relations “should be legal” increased from 43 to 64 percent, while those who consider homosexuality “morally wrong” decreased from 53 percent in 2001 to 38 percent in 2013.

While the temporal correlations are suggestive, a more rigorous analysis involves segmenting the population by their belief about attribution (those who believe homosexuality is inborn vs. those who don’t) and comparing the groups’ responses to a series of questions, such as support for same-sex relations, their opinions about same-sex marriage, and their attitudes toward moral acceptability.

Understanding the biological roots of sexual behavior goes beyond pure science, helping to shape attitudes, laws, and, ultimately, the ability of people to live free and open lives.

The results are striking. For every one of these questions, people’s belief about the origins of sexual orientation is the single most important factor in determining their opinions about equal rights. It is more important, by a large margin, than sex, age, education, religiosity, and even self-identification as “born again.” It is also replicable across different survey instruments and samples, and appears to represent a discrete factor independent of liberal or conservative political affiliation (Personality and Social Psychology Bulletin, 32:471-485, 2006).

For example, while most of those who believe that people are born gay agree that same-sex relations should remain legal, nearly 70 percent of people who believe it’s a choice think that antisodomy laws should be reinstated. To put it personally, they think that the discoverer of the Xq28 linkage should be in jail right now rather than engaging in scientific research or writing this essay.

Unfortunately, the positive effects of the scientific findings have been countered by the efforts of anti-gay activists, motivated by religious fundamentalism, to spread their view that people choose their sexual orientation and can change it. Recently, their efforts came to the fore in Uganda, where President Yoweri Museveni initially blocked a vehement anti-gay law as discriminatory because he considered homosexuality to be an inborn trait comparable to albinism. But when his Ministry of Health—using words and arguments drawn directly from anti-gay and anti-science religious groups from the United States—issued a report concluding that there is “scientific proof that homosexuality is not genetic,” Museveni changed his mind. Although the Ugandan president has issued a call to the United States government for scientific advice and assistance, there has been no official response.

The events in Uganda illustrate that the real danger is to ignore the science of human sexuality. In this, as in so many areas, what drives prejudice and discrimination is ignorance, not knowledge. Understanding the biological roots of sexual behavior goes beyond pure science, helping to shape attitudes, laws, and, ultimately, the ability of people to live free and open lives. It thus behooves scientists who conduct such research to be thoughtful participants in how their data are presented and play out in the public forum. This is why I continue to believe, as I stated in Science more than 20 years ago, that “scientists, educators, policy-makers, and the public should work together to ensure that such research is used to benefit all members of society.” 

Dean Hamer is a geneticist and scientist emeritus at the National Institutes of Health, where he conducted research and directed the National Cancer Institute’s Gene Structure and Regulation Section for 32 years. He coauthored the 1994 book The Science of Desire: The Search for the Gay Gene and the Biology of Behavior with Peter Copeland.