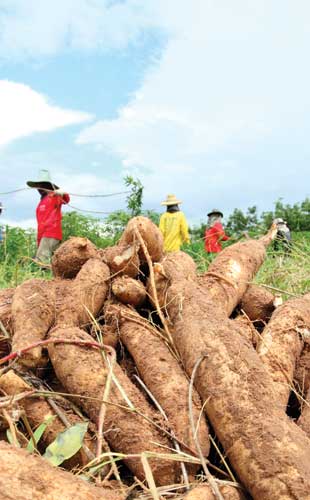 © ISTOCK.COM/TAWNINTAEWRNA interference (RNAi)—the process by which small interfering RNAs (siRNAs) bind to and cleave complementary mRNA sequences, inhibiting their translation into proteins—is not new to agriculture. In fact, as a naturally occurring biological process, RNAi was mediating plant metabolism, growth, and pathogen defense long before humans began cultivating crops for their own benefit. But in the last 15 years, RNAi’s role in agriculture has grown as researchers have developed greater understanding of the mechanisms underlying the phenomenon and employed it to improve pathogen resistance, nutrition, and yield of crop plants. RNAi-enhanced crops have been approved for cultivation by regulatory agencies in the United States, Europe, Canada, Australia, New Zealand, and Brazil, and some of these crops—for example, papaya—have already reached our plates.

Despite widespread debate on public acceptance of genetically modified organisms, several unique features support the safety profile of RNAi-enhanced products, including the ubiquitous nature of siRNAs in plants; the history of safe use and consumption of naturally occurring and transgene-derived RNAi crops; high species specificity that minimizes off-target effects; and lack of toxicity and allergenicity, resulting from the fact that no transgenic protein is produced by such plants. Clearly, RNAi holds tremendous potential for producing healthier crop plants with enhanced nutritional value.