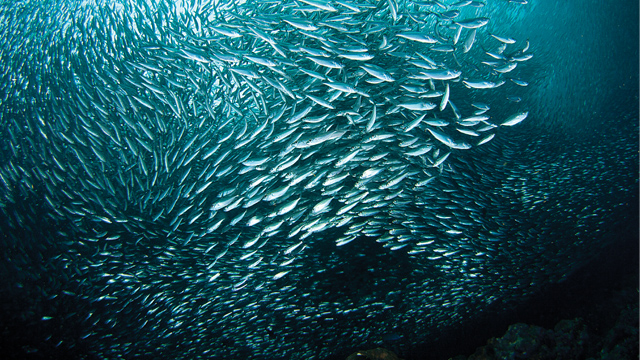 Despite their vital role in maintaining healthy oceans and their high economic value, only in recent years have forage fish—small fish that rank relatively low in the ocean’s food chain, such as sardines, anchovies, and herring—finally begun to garner the attention they deserve. Forage fish account for more than one-third of the world’s marine fish production, but are rarely directly consumed by people. Ninety percent of the catch is used in agriculture, in aquaculture, and as health supplements in the form of fish oil, which is valued for its rich supply of healthful omega-3 fatty acids.

To meet the demand of the industries depending on them, these fish are being pulled from the ocean at an enormous and increasing rate, resulting in serious declines in their numbers and knock-on effects that reverberate through ocean ecosystems. With price and demand continuing to skyrocket, it’s time to hit the...

The recently released report, “Little Fish, Big Impact,” authored by the Lenfest Forage Fish Task Force, an international team of 13 preeminent marine and fisheries scientists, sheds new light on the ecological and economical importance of forage fish. The authors, including myself, found that more than half the diet of many seabirds, marine mammals, and larger fish, such as tuna, cod, and salmon, consists of forage fish. And, as their food supply has declined, so has the abundance of these predator species. The report also revealed that the value of forage fish left in the ocean to support production of larger, commercially important species is twice their value in a net. Overall, forage fish are worth nearly $17 billion per year to commercial fisheries—$5.6 billion as direct catch and $11.3 billion as food for larger commercially important fish.

The value of forage fish left in the ocean to support production of larger, commercially important species is twice their value
in a net.

Prior to the formation of the task force, management guidance for forage fish generally focused only on forage species and ignored the many other species that depend upon them. Indeed, high fishing rates in the past led to boom-and-bust fishery yields and some spectacular collapses. In the Barents Sea, repeated collapses of the forage fish capelin in the 1980s and 1990s caused nutritional stress and cannibalism in cod, a predator fish, with consequent economic losses to the cod fishery. Starving mammals and sea birds died or left the area. This situation was addressed by the Joint Norwegian-Russian Fishery Commission establishing what is called the “capelin rule,” which prohibits fishing of capelin if the biomass of the population falls below 200,000 tonnes. This rule has been successful in preventing further collapses of capelin, and has also restored the cod population in the Barents Sea to very high levels.

After 3 years of intensive work involving the synthesis of existing information and the development of new science, including a global analysis of 72 food web models (Fish and Fisheries, DOI:10.1111/faf.12004, 2012), the task force  came to our conclusion: only “precautionary” management strategies—those which set relatively low catch rates and prohibit fishing if the biomass falls below a minimum threshold—can protect both the small fish and the species that depend on them. Slow to take hold in the 20th century, the precautionary approach has gained favor only after many of the world’s major herring, sardine, and anchovy fisheries collapsed. Conventional strategies that are based on the goal of maximizing the yield of forage fish and allowing relatively high catch rates are more commonly used, but were not designed to take into account the variability in stocks of forage fish, their unique life-history characteristics, or the role they play in the ecosystem.

In circumstances where basic information about the local forage fish population is lacking, the task force advises that no new commercial forage fish harvesting be initiated. Most fisheries now considered well-managed from a conventional, single-species perspective will likely fall within the “intermediate” information range, as defined by the task force, for which it is recommended that catches be halved, and the amount of forage fish left in the ocean should be allowed to double. The cutbacks recommended by the task force could substantially reduce forage-fish catches in some places. However, the overall benefits of following the task force’s advice should far outweigh the costs. The possible payoffs include more robust and stable forage fish fisheries, healthier oceans with a full complement of marine life, and greater economic value of global commercial fisheries. Overall, these hefty gains warrant the implementation of more conservative management of some very small fish. 

Ellen Pikitch is the executive director of the Institute for Ocean Conservation Science at Stony Brook University in New York and the chair of the Lenfest Forage Fish Task Force. 