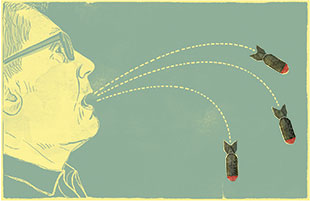 © BRUCIE ROSCHThe terms that scientists and researchers select to name a new biotechnology or biomedical process can impact the public’s perception of the advance and willingness to consider its potential clinical utility. Terms such as “cloning” or “gene editing” are not ethically neutral. In fact, while the use of these terms may be provocative and increase readership of news stories and even articles in peer-reviewed journals, such value-laden names may directly impact the ethical acceptability of new technologies as well as government policies related to these innovations.

There are a few examples of semantics triggering a change in scientific or medical terminology to avoid negative ethical connotations or nuances. In medicine, for example, nuclear magnetic resonance (NMR) was renamed magnetic resonance imaging (MRI) to avoid the fear elicited by the word “nuclear”—even though the technology does not involve any exposure to radiation.

Sometimes a technology is so...

Cloning made headlines again a couple of years after Dolly’s birth when my colleagues and I published a study showing that the ewe’s mitochondrial DNA came from the recipient oocyte and not the donor nucleus (Nat Genet, 23:90-93, 1999). Before publication, the editors of Nature Genetics discouraged us from titling our paper “Dolly is not a true genetic clone” because of the negative ethical connotations surrounding the term “clone.”

Interestingly, however, the term “clone” was never used in the title or in the text of the original Dolly paper. One could speculate that the authors chose the morally neutral term somatic cell nuclear transfer (SCNT) to circumvent the negative ethical connotations associated with the term cloning. In addition, the technology that led Wilmut and his colleagues to clone Dolly was never intended to clone people; it was designed to develop a cost-effective method for genetically altering cows or sheep to produce important biological compounds in their milk. Nonetheless, this technology has elicited world-wide debates concerning the ethics of cloning.

No one can deny that it is important for the media, scientists, and ethicists to debate and discuss serious ethical concerns related to new techniques and biotechnologies. But all parties involved in the discussion should not let scientific terminology prejudice their views regarding potential health benefits or ethical challenges associated with new technologies.

Recent advances in applying SCNT to humans (Cell, 153:1228-38, 2013) still require careful consideration with regard to their terminology in order to focus public opinion on the positive objectives of scientific research. A current medical application of SCNT technology, for example, may enable a woman with mitochondrial disease to have healthy children by transferring a nucleus from one of her eggs into an enucleated donor egg. Often, the media (including The Scientist) and scientific papers refer to this technology as “three-way parenting,” “mitochondrial gene therapy,” “mitochondrial manipulation,” or “mitochondrial transfer,” but these terms raise negative ethical concerns.

Some believe the technology will open the door to reproductive cloning; others are worried that human dignity will be violated by the inevitable destruction of the nucleus of the egg that “donated” the healthy mitochondria. Such concerns and challenges must be discussed and debated in an unbiased manner. Therefore, referring to this process as “mitochondrial replacement therapy”—proposed by Mark Sauer of Columbia University and Dieter Egli of the New York Stem Cell Foundation (NYSCF), based on terminology employed by the UK’s Human Fertilisation and Embryology Authority (HFEA) and the mitochondrial-disease charity The Lily Foundation—may be a more morally neutral label that describes the intended medical application of this technology to generate healthy babies.

Another exciting technology that is receiving a lot of attention is gene editing (J Genet Genomics, 40:281-89, 2013). ZFNs (zinc-finger nucleases), TALENs (transcription activator-like effector nucleases), and most recently CRISPRs (clustered regularly interspersed short palindromic repeats) are different gene-editing technologies that allow scientists to selectively and specifically change or delete designated regions of a cell’s genetic code. Once again, the objectives of developing gene-editing technologies are to treat disease and to improve health care. Using such technology, for example, scientists can insert a site-specific mutation in the hemoglobin gene of normal mice to create a mouse model of human sickle cell anemia to test potential therapies for the disease. In the future it may be possible to genetically edit the hematopoietic stem cells of a patient with sickle cell disease to create cells without this mutation (Curr Gene Ther, 14:1, 2014). These stem cells could then be transplanted back into the patient to generate genetically reconstituted hematopoietic cells that produce normal hemoglobin (Nucleic Acids Res, 42:1365-78, 2014). Moreover, this technology could be applied to human embryos to excise repetitive base pairs that are responsible for a variety of neurodegenerative diseases such as Huntington’s disease (PNAS, 109:E3136-45, 2012).

Despite these promising applications, the term “gene editing” is associated with negative ethical connotations (Gene Ther, 20:121-27, 2013). Some ethicists are concerned about modifying a person’s genome in ways that will affect future generations; others fear that gene editing will lead to a slippery slope in nonmedical situations, such as adding athletic or cognitive enhancements to unborn children. In the past, some scientists have tried to reclassify gene editing under the rubric of gene therapy, but “gene therapy” also elicits unethical connotations, in part because an 18-year-old named Jesse Gelsinger died in 1999 after he received an experimental gene therapy protocol. (See “Targeting DNA,” The Scientist, June 2012.)

Everyone recognizes the need to address and debate ethical concerns and the potential health risks and benefits surrounding gene editing. Referring to such technologies as “gene-repair” strategies more closely conveys the techniques’ potential health benefits, as the term focuses on their application to correct medical conditions, helping to defuse more negative connotations.

In an age when new and exciting scientific and medical discoveries are reported and publicized, it is vital that the terms scientists choose to label and describe these discoveries convey their potential clinical benefits and do not elicit negative ethical reactions. Science and technology are, per se, morally neutral, and the ethical concerns of a new technology should be based on facts and potential applications, not on semantics. 

John D. Loike is the director of special programs at the Center for Bioethics, Columbia University College of Physicians and Surgeons.