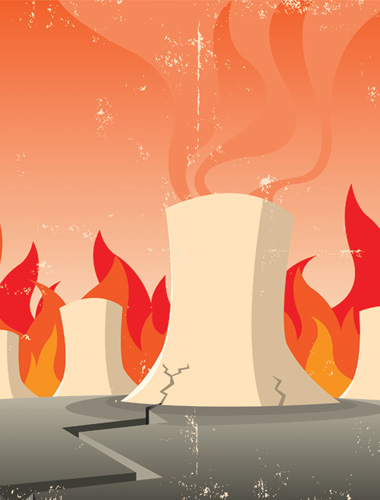 Damage to nuclear reactors and buildings at the Fukushima Daiichi nuclear power plant following the earthquake and subsequent tsunami that struck Japan on March 11, 2011, resulted in the second-largest release of radioactive substances into the environment since the start of nuclear power production, and the largest accidental releases in history to the marine environment. Only the Chernobyl disaster surpassed it in magnitude.

Radioactivity from Fukushima was detected in many parts of the world, but outside of Japan, deposition was low. Regularly updated information on contamination levels in the Japanese environment and foodstuffs has been openly available since March 2011. One year on, the radioactive isotopes of major concern in Japan are the cesium isotopes 137Cs and 134Cs, with half-lives of approximately 30 and 2 years respectively.

Following the 1986 Chernobyl accident in the Ukraine, measures to reduce the transfer of radiocesium to foodstuffs...

In the immediate aftermath, consideration of the exposure of wildlife was not a primary concern.

In the immediate aftermath of an accident of the scale of Fukushima, consideration of the exposure of wildlife was not a primary concern. However, the releases of radioactivity were considerable, and there have been some initial attempts to assess the doses received by wildlife. One of these estimated that dose rates to forest species in the area of highest atmospheric deposition outside of the 20-km exclusion zone (25–45 km northwest of the Fukushima site) ranged from 2 to 6  milli-Gray/day (mGy/d) over the first 30 days  following the accident. These same authors suggested that the maximum dose rates to marine biota in the first 3 weeks after the accident could have reached peak values of 210 to 4,600 mGy/d (the lowest for marine birds and the highest for seaweed). Other assessments considering longer periods after the accident (see here and here) suggest that dose rates to marine organisms would have declined quickly and were unlikely to have exceeded 10 mGy/d during the first 2 months. These estimates for terrestrial and marine ecosystems are provisional, and somewhat “back-of-envelope,” using relatively limited data and making assumptions that may both over- and underestimate exposure, such as the use of constant values of environmental contamination when we know that these were rapidly fluctuating in the marine environment. That said, they have initiated a debate that demonstrates the need for studies. Moreover, as we are writing this article, observations of reduced bird numbers at sites to the west of Fukushima Daiichi have been interpreted as demonstrating an effect of radiation.

More than 25 years after the Chernobyl accident, there is no scientific consensus on the impact that chronic exposure to radiation has had on wildlife in the area around the nuclear power plant, from which the human population was evacuated. This is largely  due to a lack of multidisciplinary and long-term research. In another 25 years we should not be equally ignorant of the impact of the Fukushima accident on the natural environment.  Robust estimates of exposure and assessment of any effects, using basic monitoring of biodiversity and similar ecosystem-level indices, as well as state-of-the-art cytogenetic approaches, are required if we are to avoid this. We have no predefined opinion on whether there will or will not be any long-term environmental impact from this accident, but the current lack of consensus related to Chernobyl adds little (from any point of view) to the debate on the role of nuclear power to address future energy needs.

Nick Beresford is a radioecologist at the Centre for Ecology and Hydrology in Lancaster, U.K. Jordi Vives i Batlle is a senior researcher at the Belgian Nuclear Research Centre.