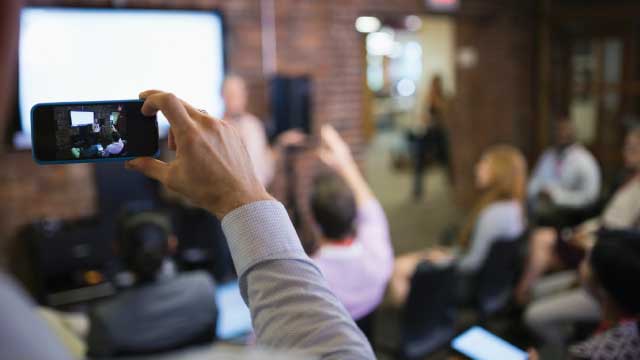 I recently attended several conferences and saw rampant recording of lectures and posters. Because my talk contained a lot of unpublished work, I asked the audience to refrain from taking pictures. But just five minutes into my talk, I saw multiple cell phones up recording my lecture. I repeated my request, and the people put their phones down. Ten minutes later, however, the very same people did it again. I asked once more, yet one person continued to record my slides.

Scientific conferences are meant to inform the attending audience about the newest results. No one wants to hear only published work; we attend meetings to get the absolute latest information that is coming out of labs. To be able to do that, an honor code exists that conference-goers cannot make use of data presented to advance their own work. While some have broken this code in...

We must enforce this old honor code to encour­age the sharing of unpublished data and ensure that science can prog­ress effectively.

Modern digital camera technology produces such high-quality images that some people decide to take pictures of slides and posters, or even film entire lectures. This is much easier than scribbling notes, and the resulting files are simpler to show to friends or colleagues. Moreover, some tweeters have started to post pictures of speakers together with their unpublished data. This means that these data are published in the widest possible sense before they are published by the authors themselves. All of these activities can have a detrimental influence on scientific progress, as researchers will begin to refrain from showing their newest data at meetings. Eventually, scientists may choose not to go to conferences at all because they can expect to see talks only on research that is already published or in press.

I thus firmly believe that photographing posters, recording parts of talks, and posting other people’s data should be officially banned, and that people who break these ethical standards should be expelled. We must enforce this old honor code to encourage the sharing of unpublished data and ensure that science can progress effectively. Ideally, the scientific community would adopt a generally acceptable and enforceable ethical code for all conferences, make it part of every program, and announce these regulations at the beginning of every meeting, following the examples of Cold Spring Harbor Laboratory symposia and Gordon Research Conferences.

Above all, this code should include the obvious rule that the knowledge you gain from unpublished work ought not be used to compete with the authors. Without adherence to such rules, scientific conferences—and the research they inspire—are at risk of being lost forever.

Wolf B. Frommer is a staff member of the department of plant biology at the Carnegie Institution for Science in Stanford, California.