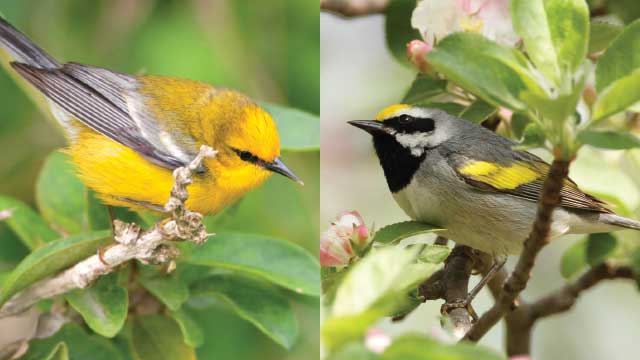 What defines a species? Because the boundaries between species can appear so fluid, pursuing such a question seems, at times, like academic esoterica—little different than discussing how many angels can dance on the head of a pin. But accurate species definitions lie at the heart of biological investigations and management of natural resources (e.g., the US Endangered Species Act). It is troublesome, therefore, that new information on the genetic structure of long-recognized species of birds could jeopardize their status as full species.

The problem, in a nutshell, is that the DNA of many familiar species of birds holds signatures of substantial exchange of nuclear genes with other bird species. Such gene exchange matters because, by decades-old definitions, it is the isolation of gene pools that defines species. Substantial genetic exchange raises questions about whether these...

A case-in-point concerns the blue- and golden-winged warblers, two beautiful and very distinctive little songbirds that have long been regarded as separate species. A recent study, however, showed that these two “species” share more than 99 percent of their nuclear genes—much more gene sharing that we would expect between full species. There is evidence that this shared nuclear genotype is a product of regular interbreeding between individual golden- and blue-winged warblers for millennia. In other words, there appears to be poor isolation of gene pools between these two songbird species. These data are leading some biologists to question whether blue- and golden-winged warblers really are separate species. The golden-winged warbler is currently a threatened species receiving conservation attention, so losing status as a separate species would change not only birdwatching field guides, but also federal and state funding to protect threatened avian populations.

There are many other examples of iconic birds with uncertain species boundaries. The Baltimore oriole, namesake of a professional baseball team, was merged with other orioles to form the not-so-iconic “Northern oriole,” before a committee of the American Ornithologists’ Union voted the Baltimore oriole back to full-species status.

In my paper, I applied this mitonuclear compatibility species concept only to birds, but there is no reason to believe that speciation in birds is fundamentally different than speciation in other complex animals. Birds provide an ideal test case for species concepts because we have detailed knowledge of their distributions and patterns of interbreeding, and because the traits that birds use in sexual signaling—coloration and song—are conspicuous to human sensory systems. Also, because of their very high respiration rates (the body temperature of most birds is around 105 °F), birds are the animal group that is likely to suffer the highest fitness costs when mitonuclear genes are mismatched across species boundaries, as the loss of function is targeted to cellular respiration.

The good news about the mitonuclear compatibility species concept is that it makes specific predictions that can be tested with the burgeoning databases on both the nuclear and mitochondrial genotypes of birds. If the hypothesis is supported in birds, then it can be applied to other vertebrates and to other animal groups.

A species concept that can be objectively applied to define species would be a boon to taxonomists and conservation biologists alike. And it is somehow reassuring that the instincts of 19th century naturalists regarding the boundaries between species might be confirmed with 21st century genomic analysis.

Geoffrey E. Hill is a professor of biological sciences and curator of birds at Auburn University in Alabama.