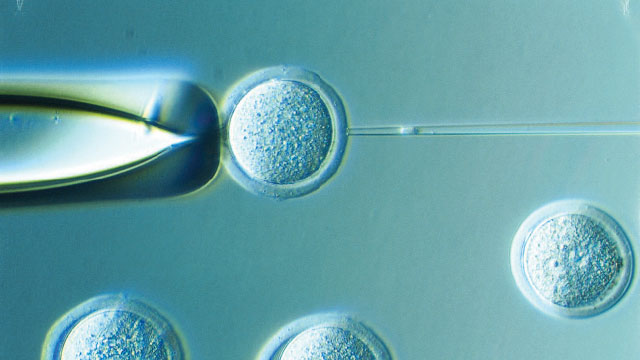 © JENNY NICHOLS, WELLCOME IMAGESIn 2015, the US Congress banned the use of gene-editing techniques, such as CRISPR, for the creation of genetically modified human embryos. President Obama also signed into law a policy that precludes modification of the human germline. An unresolved issue with Congress’s ban and President Obama’s law is whether they encompass mitochondrial replacement therapy (MRT), a procedure that allows women with mitochondrial disease to give birth to unaffected children by inserting a nucleus from one of her eggs into an enucleated egg from a woman with healthy mitochondria, followed by in vitro fertilization.

A recent National Academies of Sciences, Engineering, and Medicine report stated that MRT is ethical if conducted exclusively in male embryos and limited to women with mitochondrial diseases. And recent studies have shown that mitochondrial donation has broader clinical applications beyond treating mitochondrial diseases, specifically in relation to infertility problems typically...

Mitochondrial replacement therapy will probably emerge as an effective method to enable women with mitochondrial disease to have healthy children, among other possible medical benefits, and should not be banned because of presumed social or ethical complexities.

MRT does raise a number of social and ethical challenges, however. One of the most debated aspects of mitochondrial donation is its potential for enabling scientists to “play God.” But, humans have engaged in genetic modifications of plants and animals for thousands of years. Moreover, preimplantation genetic diagnosis (PGD), a genetic profiling technique for IVF-generated embryos, can be viewed as a form of genetic selection to alter the human population’s genome pool by eliminating embryos with various genetic diseases. We argue that MRT is akin to these long-standing practices.

Another scientific and legal point of contention is how the term “genetic intervention” is interpreted. Many ethicists restrict its use to the exclusive involvement of germline modification of nuclear DNA. We and others propose that any genetic modification of germ cells—whether in the DNA of the nucleus or the mitochondria—constitutes germline intervention because the donor is providing essential genetic information to the child. Similar to sperm or egg donation, we argue that MRT should be considered a form of genetic intervention and that the congressional and presidential bans be reconsidered.

Concerns have also been raised about the unintended consequences of “three-parent” children. A key consideration here is whether mitochondrial donation should be regulated in the same way as a conventional organ donation—in which case the recipient acquires all the rights and responsibilities of the donated organ and the donor has neither parental rights nor legal responsibility for any unforeseen genetic diseases that the recipient receives from the donation—or be treated as egg donation, which carries unique ethical and legal considerations. Because the genetic contribution from the mitochondrial DNA donor is essential and critical for the development of a healthy child, and because emerging studies show that several mitochondrial genes affect mental illness, we argue that the genetic contribution from mtDNA should not be considered irrelevant to the status of parenthood. But there are legal ways to navigate this ethical challenge, similar to the avenues for giving up parental rights in the case of adoption.

As is the case with adoption as well as with other third-party reproductive technologies, such as egg donation and gestational carriers, MRT also raises the question of whether the resulting offspring have a right to know their genetic parentage and lines of ancestry. This could compromise donor privacy. But again, there are now ways to deal with such challenges. Namely, as the price of gene sequencing decreases, every child can ultimately have his or her genetic information available without revealing the identity of the genetic contributors.

There are two other ethical concerns to MRT that are related to its high costs, which run between $25,000 and $50,000. The first is the fair distribution of medical resources to make this therapy available to all patients regardless of their financial capabilities. This concern can be circumvented, in part, by virtue of its potential eligibility as an approved treatment for infertility or for mitochondrial mutations, as many US states allow insurance providers to cover some costs of IVF for infertility. The second concern is that if the access to this technology is not fairly distributed, then economically disadvantaged women may be at risk of exploitation because of the excessive compensation paid to mitochondrial donors. This financial coercion of impoverished egg providers is already a global problem and serves as a cautionary warning for mitochondrial donation. There should be strict legal safeguards against such practices.

MRT will probably emerge as an effective method to enable women with mitochondrial disease to have healthy children, among other possible medical benefits, and should not be banned because of presumed social or ethical complexities. Given its potential for permanent alterations of DNA, this technology should not be viewed as equivalent to classical organ donation but rather treated with precautions in line with other germline interventions, such as egg or sperm donation, for which regulatory practices are already in place. Using these as a framework, governments and the scientific community should invest time and money into making MRT widely available to patients.