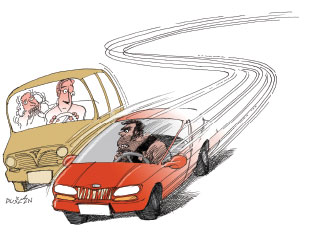 © DUSAN PETRICIC We live in a much different world from that in which we evolved. Until very recently, survival for all humans was difficult. Harsh conditions fostered cooperation within small groups, often made up mostly of one’s relatives, thus favoring strong social bonds. Over the last few centuries, and especially in the last few decades, however, the invention of rapid communication systems that span vast distances and a flood of affordable commercial conveniences allow us to interact with a huge number of people over our lifetimes, but those interactions are typically much more cursory. Even though our rational, educated minds can adapt to different environments, our basic hardwired instincts are slower to evolve. Biologically, the human brain that went to the Moon is the same that hunted mammoths in the last Ice Age. And tribal instincts, emotions, and attitudes—crucial for our ancestors’ survival and reproduction since they first...

For ancient humans, being accepted into the tribe was essential for survival; interactions with strangers were rare. Every social interaction could therefore have important consequences for one’s role in the tribe, and this tribal structure instilled a rigid social hierarchy. An innate respect for such hierarchy, which can manifest as obedience to authority figures, was demonstrated by the classic experiments of Stanley Milgram. When participants were instructed by a scientist to administer electric shocks to another person (an accomplice of the scientist), 65 percent fully complied, even though they had been led to believe the shocks were up to 450 volts and extremely painful (J Abnorm Soc Psychol, 67:371-78, 1963). Scientists have also shown that we tend to vote for political candidates who are taller and more attractive, which could be a reflection of our instinct to look up to physically healthy and strong males (Soc Sci Quart, 92:1215-35, 2011; Psychol Sci, 24:2429-36, 2013). Even children have been shown to pick election winners 64 percent of the time when shown pictures of candidates (Science, 323:1183, 2009). Such ideals are not always appropriate in the modern world, where physical performance no longer dictates life success.

Tribal hierarchies may have also contributed to feelings of extreme anger over seemingly trivial disputes. In a tribe, individuals—males in particular—needed to be assertive to gain access to food and to women. Today, when dealing with complete strangers whom we perceive as imposing, our aggressive instincts can take over, and someone gets run off the road or shot.

Biologically, the human brain that went to the Moon is the same that hunted mammoths in the last Ice Age.

The tribal setting also instilled many divisive behaviors, such as patriotism and xenophobia, based on imagined differences between groups of people. Experiments have shown that complete strangers arbitrarily split into groups will develop discrimination behaviors (Sci Am, 223:96-102, 1970). Scientists have argued that prejudice is a hardwired instinct for protecting the tribe from outsiders who could harm the group by spreading disease, stealing, competing for resources, or by violent behavior (J Pers Soc Psychol, 88:770-89, 2005). Given that immigration fears recently propelled UK citizens to vote to leave the European Union and that racial differences will likely play an important role in the next US presidential election, these “caveman” instincts may still feature prominently in our modern society.

For those lower on the social ladder, fitting in with the ancestral group may have been the safest strategy. Fear of embarrassment, disapproval, and rejection is another human tendency that is likely rooted in this tribal need for belonging. In one classic social psychology experiment by Solomon Asch, 35 percent of college students gave a clearly incorrect answer when judging the length of straight lines, merely because four other students (Asch’s accomplices) had given the same answer (in Groups, Leadership and Men, pp. 177–90, Carnegie Press, 1951). This instinct to seek social acceptance may explain why most people are uncomfortable speaking in public. Fear of public embarrassment and disapproval, while once beneficial in a small group where acceptance was essential to one’s survival, can surface today even when dealing with complete strangers we will never meet again. The deep-rooted drive to fit in, a legacy of our tribal past, is already exploited by modern commercial markets. In our information-rich, decision-overloaded environment, companies take advantage of our instinctive behaviors by using celebrity endorsements or claims of popularity to promote products.

Perhaps the most obvious trace of humans’ primordial past is our persistent shortsightedness. We respond quickly to clear and present dangers, but not so rapidly to unclear and future ones. Far more people die of type 2 diabetes than from terrorism; far more people die of skin cancer than from shark bites. But terrorism and shark attacks could kill you tomorrow, so they garner much more of our attention. Short-termism is also why convincing people to act on issues like global warming—which will most significantly affect those in the future, with poorly defined consequences—is so difficult.

Our tribal-era instincts are still very much a part of who we are. Studying the social and physical environments that shaped human evolution, then, could help us better understand the modern human psyche. Acknowledging our own tribal instincts can also help us overcome these obsolete behaviors in our daily lives.

João Pedro de Magalhães is a biologist in the Integrative Genomics of Ageing Group, part of the Institute of Ageing and Chronic Disease at the University of Liverpool, U.K.