Gut microbiome–based solutions hold promise for addressing obesity, but are they overhyped?

Simar Bajaj is a research fellow at Massachusetts General Hospital and Stanford University School of Medicine, where he studies obesity and cardiothoracic surgery.

ABOVE: modified from © istock.com, newannyart

Our guts are teeming with life. Trillions of bacteria, viruses, and fungi call our gastrointestinal metropolises home. Unicellular microorganisms help dismantle complex carbohydrates and construct vitamins. They patrol dark back alleys to keep pesky pathogens at bay. They send signals across our intestinal byways and beyond. Scientists have spent decades surveying these microbial citizens because unlocking their secrets might aid in the understanding, prevention, and treatment of ailments from heart disease to Alzheimer’s. 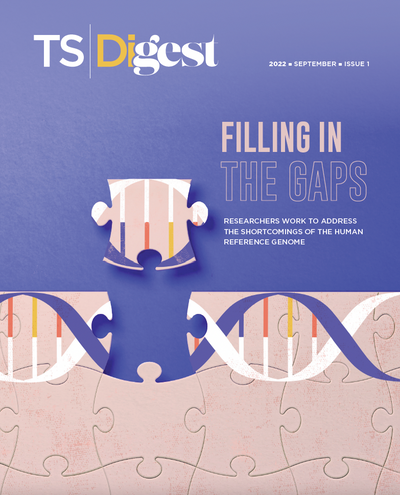 With half of all Americans to have clinical obesity by 2030, weight loss applications might be the most promising front in gut microbiome research. In 2013, Lee Kaplan and Jeffrey Gordon, gastroenterologists at Massachusetts General Hospital (my home institution) and Washington University School of Medicine in St. Louis, respectively, conducted separate studies demonstrating this potential. In Kaplan’s study, published in Science Translational Medicine, mice that received weight-loss surgery saw a remarkable shift in their gut microbiomes. And when these microbes were transplanted into other mice’s guts, the recipients experienced rapid weight loss as well. With fecal microbiota transplant (FMT), Kaplan could achieve 20 percent of weight-loss surgery’s benefits—without the surgery (5:178ra41).

Without a more targeted strategy, obesity may dwindle. We need a scalpel, not a sledgehammer.

In Gordon’s study, published in Science, mice received feces from human twins, one who had obesity and one who did not. Mice that got the lean twin’s feces remained lean while those that got feces from the twin with obesity gained weight. Furthermore, housing the two recipient mice together so they could eat each other’s feces—something that mice, in fact, do—allowed the heavier mouse to lose weight, so long as they were all fed a low-fat diet (341:1241214). The next step, Gordon told The New York Times, was to determine which gut bacterial species induced thinness to give patients those specific microbes as an obesity treatment.

Fast forward a decade, and we’ve moved into human-to-human FMT experiments. Mass General endocrinologist Elaine Yu and Brigham and Women’s Hospital gastroenterologist Jessica Allegretti are conducting separate clinical trials with so-called “blind” FMT. In other words, they’re trying to examine if oral capsules with lean donors’ feces—crapsules, if you will—can help patients with obesity lose weight. Despite initial excitement, preliminary results published a couple of years ago from both Yu’s trial and Allegretti’s trial showed no significant change in body weight. Without a more targeted strategy, the hope of a microbe-based treatment for obesity may dwindle. We need a scalpel, not a sledgehammer.

Nonetheless, these sobering findings have done little to stem the hype surrounding FMT and microbial therapies more broadly. Boston-based startup Finch Therapeutics, a partner on Allegretti’s trial, raised about $130 million on the first day it went public in March 2021 on the promise of its freeze-dried poop pills treating everything from Crohn’s disease to obesity. The company, however, does not yet have any products on the market. Similarly, microbiome researcher Jeff Leach earned national news coverage for using a turkey baster to seed his intestines with a Tanzanian Hadza tribesman’s feces—a do-it-yourself FMT. (He’s earned the nickname “Doctor Shit” in Swahili.) Leach was trying to “rewild” his gut microbiome from its supposedly sickly, industrialized state—one that research has shown is associated with obesity, diabetes, and other chronic diseases—to a purportedly healthier, ancestral one. Many companies in the weight-loss supplement industry, estimated at $94.5 billion in 2022, have also jumped on this bandwagon, peddling dubious weight-loss claims about their prebiotics and probiotics.

Maybe it’s the supposed ease of the solution that explains the unbridled excitement around a microbial treatment for obesity. The root causes of obesity are often wrongly boiled down to failures in diet or exercise; the condition is popularly conceptualized as a lifestyle disease wrought by poor behavior. So, rather than turn to the seeming extremes of pharmaco-therapy or weight-loss surgery, a more “natural” option, like taking poop pills, holds a certain appeal. But this approach may risk potential off-target effects of altering the gut microbiome. For example, in at least one case someone developed obesity after getting an FMT to treat recurrent Clostridium difficile infection, for which FMT is the standard of care. So, transforming the gut microbiome solely in the name of weight loss might not be safe or feasible. What new problems might we be creating with this myopic focus?

Maybe we’ll eventually figure out how to shape our gut microbiome to target obesity. Maybe we won’t. There’s obviously reason to be optimistic but not enough evidence yet to justify all the hype, especially because this nascent science is often misrepresented in the name of profit. Obesity is a complex chronic disease that is influenced by the gut microbiome but not necessarily a disease of the gut microbiome. So treating obesity requires multimodal solutions. Despite centuries of effort to pin the problem on a single culprit and identify an easy cure, there is no magic bullet.

Simar Bajaj is a research fellow at Massachusetts General Hospital and Stanford University School of Medicine, where he studies obesity and cardiothoracic surgery.