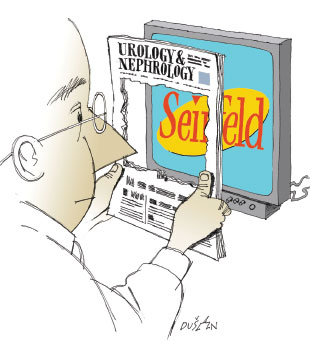 © DUSAN PETRICICEarlier this year, I was invited to submit a paper to a dubious urology journal. I’m not a physician, much less a urologist. But I am an editor of scientific writing who has a strong antipathy for predatory journals. I’m also a Seinfeld fanatic.

So I decided to troll this publication, the MedCrave Group’s Urology & Nephrology Open Access Journal, to see whether they would agree to publish a totally made-up, Seinfeld-themed “case report” about a man who develops “uromycitisis poisoning.” This was inspired by the classic 1991 episode, “The Parking Garage,” in which Jerry Seinfeld can’t find his car in a mall lot, has to urinate, does so against a garage wall, is caught by a security guard, and tries to get out of a citation by claiming that he suffers from a condition called uromycitisis. Seinfeld argued that, due to...

I went all out. I wrote my report as Dr. Martin van Nostrand, the physician-alter ego of another Seinfeld character, and listed more show-inspired names as bogus coauthors. I made an email account for Dr. van Nostrand and created a fake institution where the authors worked: the Arthur Vandelay Urological Research Institute. In the acknowledgments section of my report, I thanked phony physicians including Tor Eckman, the bizarre holistic healer from the Seinfeld episode “The Heart Attack,” giving him a Doctor of Holistic Medicine (HMD) degree. Basically, I wrote the manuscript in a style as close to a real case report as I could, except that it was 100 percent fake.

To my surprise, a representative at Urology & Nephrology Open Access Journal wrote to say that my manuscript had been sent out for peer review. Three days later, it was conditionally accepted. I was asked to make minor revisions—including trimming the abstract and including the phony patient’s lab results—and pay a “nominal” $799 fee, plus tax.

Continuing to dupe the publication, I did all that was asked—except remit payment—and, on March 31, my report was published on the journal’s website (PDF). I have no intention of paying the requested fee.

A simple Google search for “uromycitisis” or “Martin van Nostrand” returns thousands of references to Seinfeld. Checking just one of the “papers” I included in the manuscript’s reference section, the editors or reviewers could easily have determined it was fabricated.

Why did the journal publish a report so easily identifiable as fake? I’ll leave that to the publication to explain.

Why, you might ask, did I take this stunt as far as I did? For nearly a year, I have been on a personal mini-crusade against fake scientific journals, and I have written several articles on the topic. In 2016, I was invited to submit a paper to the Journal of Nanomedicine Research, which is also published by MedCrave. I posted an article on LinkedIn about this, but it was not widely read, nor effective at exposing the journal as dubious. So when the urology journal came calling, I thought a more-extreme trolling operation might be more effective. I wrote the fictitious case report over a weekend.

My short-term goal is to expose MedCrave as a publisher that will print fiction, for a price. My long-term goal—an ambitious one, I know—is to stop the production of predatory journals altogether.

John H. McCool is the founder and senior scientific editor of Precision Scientific Editing, based in Houston, Texas.

Editor’s note: Prior to publication of this article, The Scientist and Retraction Watch requested comment from Urology & Nephrology Open Access Journal/MedCrave Group, but did not receive a response on deadline.