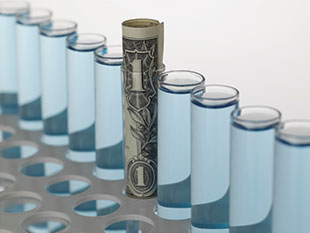 Chances of obtaining a grant from the US National Institutes of Health (NIH) and National Science Foundation (NSF) are at an all-time low: currently, less than 10 percent of proposals for R01s—NIH’s bread-and-butter research grants—are funded. In theory, this should encourage universities and scientists to be more efficient and resourceful in their use of funds once they score a grant. Yet, paradoxically, the current system creates incentives for tremendous waste, and does not make use of the available money. Policy change is necessary to ensure that tighter budgets are utilized in a way that supports the best work of scientific and societal value.

How is the current system wasteful? Because grant money is tight, investigators are forced to apply for more grants to increase their odds of winning one, pushing grant-funding rates down even further while increasing the portion of scientists’ time spent writing grants rather...

Overhead—the indirect costs such as libraries, electricity, facilities maintenance, new buildings, and administrative staff, among other things—is usually expressed as a percentage of the direct costs of research. These indirect costs vary, but usually constitute 30 percent to 70 percent of the total grant dollar amount. And the research bureaucracy at universities has mushroomed to deal with all the regulations associated with managing grant overhead—a positive feedback cycle leading to growing indirect costs.

Maria Zuber, vice president for research at MIT, stressed in a November Nature News article that research is a money-losing proposition for universities. Rising administrative costs and expensive start-up packages to recruit excellent faculty all contribute to costs that universities hope to recoup with overhead.

Large grants and fancy buildings and equipment bring prestige to the university and enable it to recruit star faculty.

Researchers have incentives to make their science as expensive as possible, because overhead is proportional to direct research costs. Furthermore, large grants and fancy buildings and equipment bring prestige to the university and enable it to recruit star faculty. Simply put, even if there is an economical way to do something, the system creates incentives for instead making it expensive.

Despite the challenges of accurately measuring scientific value and impact (see “Assessing Research Productivity,” The Scientist, January 2015), researchers will become free to use available funds to do creative and impactful research only when the incentives are changed to reward scientific value, rather than grant. The initial and most critical step toward this end is to break universities’ addiction to overhead.

First, funding agencies could mandate a limit on overhead cost, perhaps by lowering overhead incrementally to allow administrations to adjust their resources over time. This would prevent ballooning of overhead and ensure that the majority of the money goes directly to research.

Second, the research overhead that currently goes toward teaching activities and new buildings—which include not only research labs but also administrative offices, teaching labs, and teaching auditoriums—should be made available through a separate mechanism rather than coming from research grants, because they support more than just research activities. Federal and state funding agencies could issue requests for applications to support teaching initiatives, curricula development, and internship opportunities for students. Public universities ought to receive additional public funding support that is dependent on the number of students they serve and on their ability to produce excellent student outcomes. This mechanism would create monetary incentives that are better aligned with students’ interests. In addition, in this framework good teachers could bring as much visibility, prestige, and funds to their university as superstar researchers do.

Third, to compensate for the loss of overhead on research grants, state and federal governments should increase their direct funding for research and teaching infrastructure at public universities, conditional on meeting predetermined standards of efficiency and effectiveness. Another November Nature article covered research output, research expenditures, and efficiency for countries around the world. Although the United States spends the most money on research, it does not fare well in terms of efficiency.

Direct infrastructure funding would have several added benefits, such as allowing a greater percentage of research grants to directly support research, and consequently enabling investigators to produce more research with a relatively smaller grant. In turn, smaller grants would allow a more even distribution of funds in the research community and increase the grant-funding rate. This would help ensure continuous support to many labs and smooth out the disruptive “boom-and-bust” funding cycles that the system currently experiences.

Breaking US universities’ addiction to overhead funding would help ensure that the limited grant money available is used creatively and resourcefully to maximize the scientific impact and value of the research it supports. 

Viviane Callier is a research scholar at the Ronin Institute for Independent Scholarship and senior science writer at The Scientific Consulting Group.