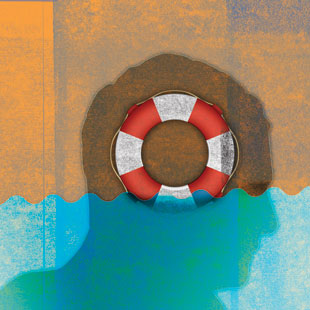 © ROY SCOTT/IKON IMAGES/CORBISDuring the early 20th century American psychiatry fell under the influence of psychoanalysis. At mid-century, psychiatry broke with psychoanalysis to align more closely with scientific medicine. As psychiatry turned toward the biological sciences, state hospitals discharged thousands of severely mentally ill patients with prescriptions in hand, and federally funded mental-health initiatives, ill-prepared to cope with the deluge, sprang up in communities across the nation. This led to a split in the practice of psychiatry. For psychiatrists concerned with the brain as an entry point into a new scientific era, neurochemistry and neuropharmacology filled the void left by psychoanalysis. For psychiatrists working in the emerging community-health programs, a wide range of additional activities and their supporting sciences—sociology, psychology, and economics, as well as vocational, transcultural, and other studies—became relevant to providing improved patient care. During the ensuing years, the brain sciences flourished, while services in communities,...

Clinician psychiatrists find current academic priorities and the policies that shape them unbalanced regarding which sciences and practices best serve psychiatric patients. By abruptly terminating federal funding of community services, the Reagan Administration precipitated a continuing decline in vital corollary adjuncts to psychiatric treatment. The use of drugs to manage mental disorders and the managed-care practices of insurance companies encouraged psychiatrists to abandon working in community health clinics in favor of practicing in offices. Federal policies that leave clinical drug development to industry, and the dependence on pharmaceutical companies for funding, constrained academic research. Academics and universities began to profit by selling their discoveries to such companies. Each of these developments has favored the tilt toward neuroscience and undermined psychiatry’s integration of other disciplines.

Psychiatry’s future will be shaped by the sciences it chooses to embrace and by social policies and priorities that influence how psychiatrists are able to practice. The public at large does not fully grasp that the success of psychiatric and medical sciences depends on societal policies that best support the delivery of good-quality patient care.

The whole of medicine faces problems with errors. Recent research revealed that 40 percent of clinically implemented medical-practice recommendations made in a leading medical journal had to be reversed because the underlying science did not pan out (Mayo Clin Proc, 88:790-98, 2013). Medical errors account for up to 200,000 deaths each year in the U.S. Over the last half century, industry and academia have promoted new psychiatric drugs as more effective than earlier drugs. In many cases, however, head-to-head drug comparisons could not document these claimed advantages (Sci Transl Med, 2:61rv6, 2010). Such reports serve to undermine the public’s trust.

Psychiatry’s turn to be scientific, like medicine’s turn a century earlier, is spawning important new technologies. Psychiatric research in genetics, for example, is beginning to make important contributions to the diagnosis and treatment of mental illness. Genetic research holds the promise that gene variants responsible for various clinical disorders will someday aid in the diagnosis of specific causes of those ailments, provide targets for new drugs, and introduce an age of individualized medicine where patients’ genomes inform their treatments.

But these advances will fail to erase significant problems faced by patients and the public, unless important scientific and policy issues are addressed. As a direct result of social policies rendering out-of-office services unrealistic for psychiatry, many severely mentally ill people are homeless and are sent to jails rather than to hospitals. They and military veterans with mental illnesses are seen only briefly, if at all, by psychiatrists. With supportive public policy, psychiatry can accept roles both as an applied neuroscience and as a discipline that draws as widely as possible on life sciences to deliver well-being and quality of life in the community. Psychiatry and medicine can refine their sciences to eliminate mistaken care recommendations that later must be retracted and clinical practices that lead to patient morbidity and mortality.

Today, psychiatrists debate whether psychiatry should become an applied neuroscience focused on brain functions or a research enterprise driven by the clinical needs of patients and communities.

Experiences in the natural sciences and in the implementation of technologies provide ways forward for psychiatry and medicine. In the 19th century, French physicist Pierre Duhem demonstrated that science cannot exclude errors, mistaken interpretations, and the mishaps that follow from them. Physics and then the aviation industry in the 20th century supplemented science with highly systematized, redundant, and effective interventions against these errors. Passengers now fly safely while patients still remain at risk from medical errors. Richard Feynman put his finger on the source of the successes: integrity in science and technology. This scientific integrity requires scientists and the public to eschew errors at all costs. To implement these practices, physicists, the aviation industry, and the public committed themselves to pursue and reject every possible source of mishaps before accepting an advance in their sciences or technologies. We can do the same for psychiatric research and medical practice.

Failures to improve the efficacy of drugs for psychiatric patients, to reduce error-caused deaths and complications, to keep the mentally ill from being jailed rather than treated in hospitals, are failures of psychiatry, of medicine, and of society, collectively. These failures are driven by social policies that continue to undermine the effectiveness with which medicine and psychiatry can serve public well-being. Society, psychiatry, and medicine can reform the shortsighted policy and lax science that allows these errors to go unaddressed and do harm to the public. With resolve, physics and aviation overcame daunting errors and mishaps. If we want excellence in our medical sciences, we will need equal commitments to a new integrity in society’s policies and in the implementation of science in patient care. 

Robert E. Becker is a psychiatrist who has held positions at Yale University, New York University, and University of Rhode Island College of Pharmacy. He served as a professor of psychiatry and pharmacology at Southern Illinois University School of Medicine, where he developed an Alzheimer’s disease research center. Becker has developed and directed community clinics, engaged in private psychiatric practice, and carried out clinical pharmacology research throughout most of his career.