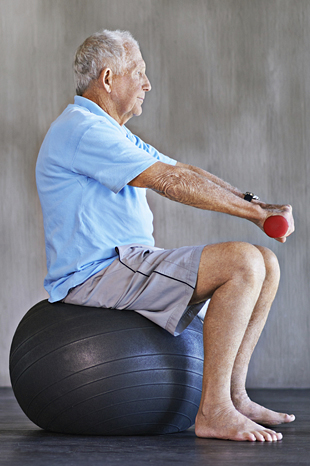 © ISTOCK.COM/YURI_ARCURSAging can be simply defined as changes over time in the biological functioning of an organism. These age-related changes are often responsible for the decline of immune, muscular, cognitive, and metabolic function, which ultimately leads to death of the organism. In humans, aging is also accompanied by the higher risk of diseases such as Alzheimer’s, cancer, and heart disease. These physiological signs of aging are difficult to measure, and current research on aging typically relies on mortality rates or measuring life span to assess the impacts of treatments, regimens, or genetic mutation on aging. However, these metrics do not adequately equate to the aging process and give little information regarding the health of the individuals or the population.

In the nematode Caenorhabditis elegans, for example, a model organism commonly used in aging research, alteration of single genes involved in any of four pathways (insulin signaling,...

Mortality rates and life span do not ade­quately equate to the aging process and give little information regarding the health of the individuals or the population.

In a recent study, we tried to answer this question by comparing changes in the health of the long-lived C. elegans with that of wild-type worms, examining multiple aspects of health over the life of the worms. Specifically, we examined established reproducible parameters that declined with age, including the ability to move and to maintain homeostasis. We assessed the ability to move using two methods. First, we placed individual animals on solid media and let them move for five minutes, then used image-analysis software to measure the distance traveled. In the second analysis, we put animals in liquid media and filmed their movement for 30 seconds, noting both the number of body bends and the coordination of the movement. To test the animals’ ability to maintain homeostasis, we measured response to two different external stressors: heat and oxidative stress. We then calculated the number of days the animals spent in a healthy state (health span) or in a state of frailty (gerospan). We also modeled the data to determine the rate of decline in each health assay.

Our results revealed that some of the long-lived worms stayed healthy for a longer period than wild-type animals when measured chronologically (by simply counting the number of days). However, all long-lived mutants also spent an increased number of days in a frail state, showing little movement and high sensitivity to external stress. This suggests that a consequence of increasing the number of healthy days is a prolonged number of days spent in a frail state.  Moreover, when we calculated the frail period as a proportion of animals’ maximum life span for a given strain, the data looked much worse: there was little health extension but a prolonged period of frailty (PNAS, doi:10.1073/pnas.1412192112, 2015).

These data reveal a significant physiological cost to life span extension in C. elegans and that life span and health span can, in fact, be uncoupled. Although extensive health span studies have not been done in other organisms,  long-lived dietary-restricted and insulin growth factor-1–deficient mice do exhibit extended health costs such as delayed sexual maturity, reduced fertility, and reduced muscle strength (Science, 299:1342-46, 2003; Mech Ageing Dev, 126:938-50, 2005). Taken together, these data point out the necessity of examining multiple health span parameters and not simply life span for future aging research.

Ankita Bansal, now a postdoc at the University of Pennsylvania, completed her PhD in April 2014 in the University of Massachusetts Medical School lab of Heidi Tissenbaum, a William Randolph Hearst Young Investigator and a professor in the Department of Molecular, Cellular and Cancer Biology and the Program in Molecular Medicine.