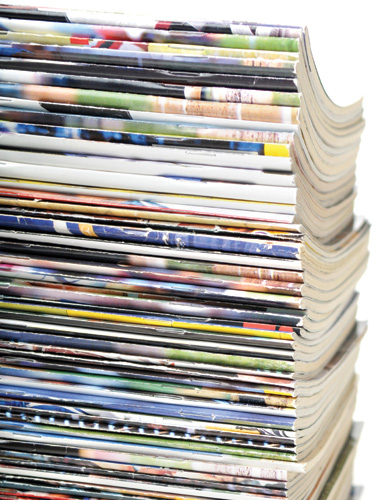 Newspapers are going to hell in a handbasket” after 20 quarters of declining ad revenue in the U.S., agree both Dean Starkman, a media critic who defends the best of traditional newspapers, and Clay Shirky, a guru of the digital age who looks forward to a future beyond newspapers. Otherwise, they disagree about most things, and as I read their fierce debate (Starkman, in the Columbia Journalism Review; Shirky, on his blog) I wonder what it might mean for the future of scientific journals.

Are the economics likely to change? Probably not in the short term. Despite calls for boycotts, scientists continue to send their studies to familiar journals; and, although open-access publishing is flourishing, with more new journals and articles, it isn’t denting the incomes of traditional publishers. Indeed, some traditional publishers—like Springer—may well be boosting their income and profits by adding some open-access publishing to their own stable. And scientific libraries, the prime customers of scientific publishers, despite grumbling at price increases, continue to be obliged to buy traditional journals.

Although scientific publishers are not facing the same economic pressures as newspaper publishers, other pressures may oblige them to change. Shirky argues that newspapers limit choices: they are the few telling the many what is news and what they should think. Now, with the arrival of the Internet and social media, anybody can be a journalist and a publisher.

Much can be gained and little lost by abandoning pre-publication peer review, and we are seeing more and more experiments along these lines.

What Starkman cares about is not so much the technology of newspapers, but rather, strong stories—thorough, well-researched, accurate reports that bring down governments and change how we think. He is unclear where such stories will come from when newspapers are bankrupted.

There are similar worries within science, which is as elitist an institution as acting, painting, or creative writing. We have our stars, and they publish in the top journals—like Science, Nature, Cell, and The Lancet. Journals are our sorting mechanism. Millions of studies are published every year, and we cope with this torrent of information by hoping that the most important papers are published in the top journals. If we read the top journals we will know what’s important.

Sadly, this is an illusion. Although science has its stars, the proletarians are important, often publishing studies that show that the studies from the stars have misled us. Indeed, because the top journals skim off the sexy, exciting, and new, we are systematically misled if we read only those journals. Economists call this the “winner’s curse,” whereby the companies that win contracts have often overbid. John Ioannidis of Stanford and others have proposed that the curse operates within scientific publishing, and we now have data to support their proposition.

A study of the 49 most highly cited papers on medical interventions published in high-profile journals from 1990 to 2004 found that by 2005, a quarter of the randomized trials and five of six nonrandomized studies had been contradicted or found to be exaggerated. A second study, published in 2011, looked at original studies of biomarkers with 400 or more citations from 24 highly cited journals. These biomarker studies were compared with subsequent meta-analyses that evaluated the same biomarkers, and of the 35 highly cited original studies, 29 showed an effect size larger than that in the meta-analyses.

Shirky argues that in the case of news it is time to move from “filter then publish” to “publish then filter.” Such a world would also be healthier for science, and less deceiving. Instead of trying to understand the world by reading top journals, we should concentrate on systematic reviews and meta-analyses that combine each new study with what already exists and show us clearly how the evidence is changing. At the moment it is hard to conduct these systematic reviews because studies are scattered in a close-to-random way through thousands of journals, many of them inaccessible.

With the appearance of open-access megajournals or databases like PloS One, scientific publishing has begun to move in the direction favored by Shirky. These “journals” have peer-review systems that don’t attempt to judge what is new and important, but simply whether the conclusions are supported by the data. If the conclusions are appropriately tentative, as they should be, then almost anything can be published. The success of PloS ONE, which is now publishing around a thousand studies a month, is attested to by how quickly and widely it has been copied. These megajournals could be game changers that will eventually bring down the empire of traditional journals.

The other reason that journals exist is for quality assurance, and the system for achieving this is prepublication peer review, a classic mechanism of “filter then publish.” I’ve been arguing for years, probably to the point of tedium, that prepublication peer review is ineffective, hopeless at spotting error and fraud, expensive, slow, largely a lottery, and prone to bias and abuse. The “real peer review” is the process that takes place after publication when through “the market of ideas”—conversations, e-mails, reviews—a study is awarded the status it deserves and slotted into existing knowledge. Much can be gained and little lost by abandoning prepublication peer review, and we are seeing more and more experiments along these lines.

Shirky and others have pointed out that newspapers are a comparatively recent invention: the first mass-circulation newspaper, The Sun, appeared in New York in 1833. Those who have spent their lives working in newspapers understandably see them as more permanent than they will probably prove to be. As The Economist has argued, “The mass media era now looks like a relatively brief and anomalous period . . .The internet has disrupted this model and enabled the social aspect of media to reassert itself. . . . Blogs, Facebook and Twitter may seem entirely new, but they echo the ways in which people used to collect, share and exchange information in the past.”

Although they began in the 17th century, scientific journals may also prove to be transitory. Before journals appeared, scientists presented their studies at meetings, and the audience would discuss their value. Because of the World Wide Web, such meetings can now be held on a global scale, and offer a return to the original peer review: immediate and open.

Scientific journals are not yet going “to hell in a handbasket,” but, as Shirky observes of newspapers, “Some of the experiments going on today, small and tentative as they are, will eventually harden into institutional form, and that development will be as surprising as the penny press subsidizing journalism for seven generations.” We don’t lack for experiments in scientific publishing, and some have already “hardened into an institutional form.” But the old journals are still there—and in a form not so dissimilar to how they were 50 years ago. Can this continue for another 50 years? I doubt it.

Richard Smith is a former member of the board of the Public Library of Science and a former editor of the BMJ and chief executive of the BMJ Publishing Group.