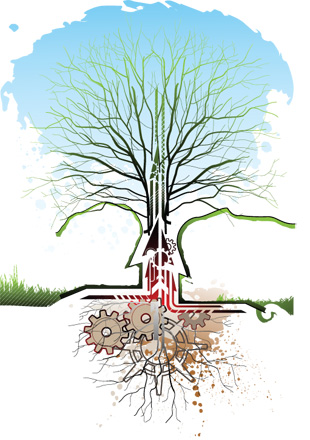 © ARMO.RS/ISTOCKPHOTO.COMThe growth of human populations, the development of new technologies, and the scope of human enterprise mean that the Earth’s systems—and the ways in which people interact with them—are changing faster than ever before. Humans appropriate more than 40 percent of the net energy produced by the world’s plants, consume 35 percent of the energy produced on the oceanic shelf, and use 60 percent of freshwater runoff. In some sense, people are already masters of their environment, engineering it for their own uses. But the human transformation of the planet is now entering a new and categorically different era: the era of synthetic biology.

Proponents of this new field argue that it can improve on the messy, inefficient, and uncertain processes of natural evolution by engineering more reliable and efficient biological systems. Synthetic biology has the potential to revolutionize biotechnology in the energy, medical, and agricultural sectors...

But what will this relentless pursuit of synthetic biology mean for the natural world and for conservation? The nature and extent of human impacts on the planet have already led to deep questions about the purpose of conservation and the measures of its success. In order to address these issues, the Wildlife Conservation Society convened a meeting in April 2013 to bring together the conservation and synthetic biology communities. These two groups had never formally met. Most of the conservationists had never heard of synthetic biology and, when briefed on it, did not see its particular relevance to what they were doing. In turn, synthetic biology researchers had paid little attention to how their work could impact, positively or negatively, the world’s biodiversity. During 3 days of presentations and discussion, the two communities learned about each other’s practices, hopes, and fears, and worked to find some common ground.

The meeting revealed two potentially worrisome types of interactions between the fields of conservation and synthetic biology. First, synthetic biology promises to produce novel organisms, to substantially modify naturally existing organisms, or even to restore extinct species—each with obvious direct implications for maintaining and restoring biodiversity. But these efforts may also have unknown consequences for the natural systems into which the novel or modified organisms are introduced. Given these concerns, it is unclear how the conservation community and the public will respond to the introduction of such organisms—including genetically modified American chestnut trees, now resistant to chestnut blight; species with DNA constructed from synthetic nucleic acids, not related to any other form of life on earth; and genetically modified, fuel-producing algae that might escape containment facilities and interact with natural communities.

The second type of anticipated interaction between synthetic biology and conservation, which is more likely to happen sooner and have a more dramatic effect on biodiversity, is indirect—and concerns the major expected commercial uses for synthetic biology. Potential applications fall into six categories: bioenergy, agriculture and food production, environmental protection and remediation, consumer products, chemical production, and human health. All of these products will require feedstocks and production facilities, with unknown knock-on effects on land use, land values, resource consumption, and businesses producing “traditional” versions of these products. For example, if palm oil synthesized by algae using synthetic biology techniques were to become economically competitive with oil produced from oil-palm plantations, what would happen with the land currently used to grow the palms, and where would the algae cultivation ponds be placed?

In some sense, people are already masters of their environment, engineering it for their own uses. But the human transformation of the planet is now entering a new and categorically different era: the era of synthetic biology.

At this time we don’t know what will happen when synthetic biology meets conservation. Nevertheless, it is imperative that conservationists engage with synthetic biologists. Without such informed engagement, it would be too easy for policy makers and politicians to incorrectly assume that synthetic biology solutions provide easy alternatives to expensive conservation efforts and have no negative consequences (PLOS Biol, 11:e1001530, 2013).

If conservationists choose to ignore synthetic biology, they do so at their own risk and the risk of the biodiversity they are devoted to protecting. Conservation needs new thinking and new strategies to cope with the challenges that human-made changes are inflicting on our planet. Although the nature and shape of the challenges are as yet unclear, synthetic biology is here to stay. The conservation community should engage and try to influence the field’s practice and outcomes now, in these early stages of the development of syn-bio technologies. Conservationists need to consider the implications of synthetic biology for the practice of conservation, both positive and negative, and move aggressively to shape the emerging field to make it as “pro-conservation” as possible.

Likewise, the synthetic biology community must engage with the general public to make them aware of the implications of its practice for the natural world. As Eleonore Pauwels of the Synthetic Biology Project at the Woodrow Wilson International Center for Scholars in Washington, DC, observes (BioScience, 63:79-89, 2013), “When industry is trying to introduce a new technology, public trust has large strategic implications as the market for that technology develops. A key variable for consumers is whether companies handle this new technology in a socially and environmentally responsible manner.”

Kent H. Redford is principal and founder of Portland, Maine–based Archipelago Consulting, established in early 2012 to help individuals and organizations improve their practice of conservation. He worked for 19 years in the conservation NGO world—for the Wildlife Conservation Society and The Nature Conservancy—and 10 years at the University of Florida. With Bill Adams of Cambridge University and Georgina Mace of University College London, he was an organizer of the recent meeting on synthetic biology and conservation.