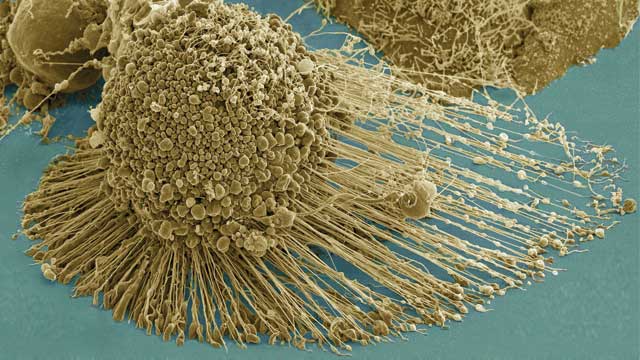 In the early days of cell culture, researchers often struggled to get their cell lines to survive for long periods of time. At first, some investigators blamed inappropriate culture conditions and kept tweaking the recipe, hoping to get it right. HeLa cells, first cultured in 1951 from cervical cancer tissue, were cloned in 1955 and became the first human cell line capable of permanent growth in culture. Thereafter, dozens of other permanent human cell lines were reported in the literature, suggesting that they were relatively easy to establish.  However, in the 1960s, Leonard Hayflick and his colleagues published a landmark series of papers explaining the initial difficulties in getting cells to grow indefinitely: normal human fibroblasts grown in culture divide a finite number of times.

Around this time several reports suggested that...

Con­tamination events may be responsible for widespread irreproducibility of preclinical studies.

Hayflick’s results regarding a cell’s doubling limit in culture should have immediately raised concern about reportedly long-lived human cell lines. Nevertheless, Gartler’s findings were met with shock from the cell-culture community. “Everybody knew that HeLa was robust, but who was going to admit that their lab had messed up?” Gartler told me in a recent discussion. “Besides, these people [wanted to believe] that they had produced another HeLa.”

Since then, instances of culture contamination with HeLa and other cell types have been reported over and over again, decade after decade. Perhaps the best demonstration of the overwhelming ubiquity of HeLa contamination appeared just earlier this year, when Paul Cantalupo of the University of Pittsburgh and his coworkers described how HeLa sequences have muscled their way into the Cancer Genome Atlas (J Virol, 89:4051-57, 2015). Specifically, the authors identified sequences of human papillomavirus (HPV), a causative agent of cervical cancer, in numerous non-cervical cancer genomes, as well as in the genomes of some normal tissues. The sequences included the junction between the HPV genome and the HeLa genome, suggesting that those cell lines weren’t themselves infected with the virus, but rather contaminated with HeLa, which does contain integrated HPV sequences.

At the same time, researchers have continued to publish studies using misidentified cell lines. Most disturbing are contamination events that go unreported, but may be responsible for widespread irreproducibility of preclinical studies. Pharma companies are constantly surveying the literature for reports that describe promising drug candidates, with the goal of moving such compounds through the R&D pipeline. However, such leads often fail to pan out, as subsequent experiments fail to replicate the results of the original study. In one series of investigations, researchers at the biopharmaceutical firm Amgen were only able to duplicate 6 of 53 peer-reviewed academic studies of potential drug candidates (Nature, 483:531-33, 2012). “The basic problem remains that non-geneticists simply don’t think in terms of identifying their material genetically,” Gartler says.

Jon Lorsch of the National Institute of General Medical Sciences and colleagues have argued that the scientific community needs to work together to ensure standards of integrity and reproducibility for authenticating cell lines (Science, 346:1452-53, 2014). One change that has already been implemented is the mandatory screening of cell lines imposed by some journals and granting agencies. At least 22 journals now require that authors testify to the authenticity of their cell lines, but it is too soon to say whether this policy change will impact the poor reproducibility that plagues translational research.

In the meantime, Bob Geraghty of the Cancer Research UK Cambridge Institute at the University of Cambridge and colleagues have published an extensive collection of guidelines for proper handling of cells in culture (Br J Cancer, 111:1021-46, 2014). Topics including authentication and characterization of cell lines are dealt with at length, and are aimed at “those who may, despite years of experience, have allowed suboptimal procedures to become part of local practice.” They recommend cell line authentication using DNA-based methods, specifically, short tandem repeat (STR) profiling, which identifies sequences of DNA that are highly variable between individuals.

Nearly five decades after rampant cross-contamination of cell lines was clearly demonstrated by Gartler and others, it remains a significant—and costly—problem. University of Colorado geneticist Christopher Korch has estimated that the costs of using mislabeled cells may be as high as $2.8 billion for just two lines, HEp-2 and INT 407. Korch arrived at this figure by estimating all the costs that go into a scientific paper, and multiplying by the number of papers that used these cell lines inappropriately. Because many of the studies were investigations of broad scientific questions and did not require a specific cell line, the actual loss to society may be less, although it is clearly substantial.

Reports in the literature that cannot be substantiated, especially in the field of cancer research, can cause great loss of time and resources, and may result in the fruitless pursuit of unworkable drug candidates. The fact that this corrosive problem has persisted for so long raises pessimism that it will never be fully eliminated. At a time when the credibility and integrity of the scientific enterprise is questioned by the public, the stakes could not be higher.

K. John Morrow Jr. is president of Newport Biotechnology Consultants, which performs consulting and writing services for the biotechnology industry.