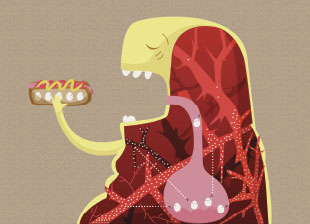 © FANATIC STUDIO/GETTY IMAGESIn Dante Alighieri’s Divine Comedy the narrator meets a man named Ciacco who had been sent to Hell for the “Damning sin of Gluttony.” According to Catholic theology, in order to end up in Hell one must willfully commit a serious sin. So Dante believed that fat people chose to be fat. This antiquated view of the cause of obesity is still widespread, even among medical professionals. The consequences of this misconception are significant, because it forms the basis for the discrimination suffered by the obese; for the wasting of scarce resources in attempts to change lifestyle habits by public education; and for the limited availability of subsidized obesity treatments.

While obesity is often labeled a lifestyle disease, poor lifestyle choices alone account for only a 6 to 8 kg weight gain. The body has a powerful negative feedback system to prevent excessive weight gain....

Evidence from twin and adoption studies suggests that obesity has a genetic basis, and over the past two decades a number of genes associated with obesity have been described. The most common genetic defect in European populations leading to severe obesity is due to mutations in the gene coding for the melanocortin 4 receptor (MCR4). Still, this defect can explain severe obesity in only approximately 6 percent to 7 percent of cases (J Clin Invest, 106:271-79, 2000). Other genes have been discovered that can cause milder increases in weight; for example, variants of just one gene (FTO) can explain up to 3 kg of weight variation between individuals (Science, 316:889-94, 2007).

It is imperative for society to move away from a view that obesity is simply a lifestyle issue and to accept that it is a chronic disease.

Genes do not directly cause weight gain. Rather, genes influence the desire for food and the feeling of satiety. In an environment with either poor access to food or access to only low-calorie food, obesity may not develop even in persons with a genetic predisposition. When there is an abundance of food and a sedentary lifestyle, however, an obesity-prone person will experience greater hunger and reduced satiety, increasing caloric intake and weight gain.

Since the 1980s, there has been a rapid rise in the prevalence of obesity worldwide, a trend that likely results from a variety of complex causes. There is increasing evidence, for example, that the development of obesity on individual or familial levels may be influenced by environmental experiences that occur in early life. For example, if a mother is malnourished during early pregnancy, this results in epigenetic changes to genes involved in the set points for hunger and satiety in the developing child. These changes may then become fixed, resulting in a tendency towards obesity in the offspring.

The biological basis of obesity is further highlighted by the vigorous defense of weight following weight loss. There are at least 10 circulating hormones that modulate hunger. Of these, only one has been confirmed as a hunger-inducing hormone (ghrelin), and it is made and released by the stomach. In contrast, nine hormones suppress hunger, including CCK, PYY, GLP-1, oxyntomodulin, and uroguanylin from the small bowel; leptin from fat cells; and insulin, amylin, and pancreatic polypeptide from the pancreas.

After weight loss, regardless of the diet employed, there are changes in circulating hormones involved in the regulation of body weight. Ghrelin levels tend to increase and levels of multiple appetite-suppressing hormones decrease. There is also a subjective increase in appetite. Researchers have shown that even after three years, these hormonal changes persist (NEJM, 365:1597-604, 2011; Lancet Diabetes and Endocrinology, 2:954-62, 2014). This explains why there is a high rate of weight regain after diet-induced weight loss.

Given that the physiological responses to weight loss predispose people to regain that weight, obesity must be considered a chronic disease. Data show that those who successfully maintain their weight after weight loss do so by remaining vigilant and constantly applying techniques to oppose weight regain. These techniques may involve strict diet and exercise practices and/or pharmacotherapy.

It is imperative for society to move away from a view that obesity is simply a lifestyle issue and to accept that it is a chronic disease. Such a change would not only relieve the stigma of obesity but would also empower politicians, scientists and clinicians to tackle the problem more effectively.

Joseph Proietto was the inaugural Sir Edward Dunlop Medical Research Foundation Professor of Medicine in the Department of Medicine, Austin Health at the University of Melbourne in Australia. He is a researcher and clinician investigating and treating obesity and type 2 diabetes.