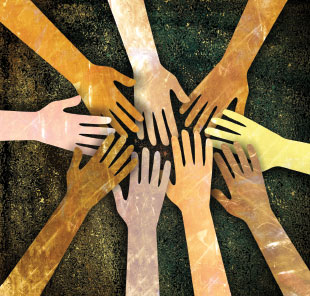 © ISTOCK.COM/PRAWNYThe Earth’s 195 sovereign states are becoming one scientific global village, where a scientist’s success depends on their willingness to carry out collaborative research with others from around the world. By the mid-1990s, scientific collaboration at institutional, national, and international levels, as indicated by coauthorship of published manuscripts, was doubling every 15 years. And by 2008, the number of internationally coauthored articles was increasing exponentially. In 2013, researchers from The Netherlands, the U.S., South Korea, and the U.K. constructed a global collaboration map that revealed international collaborations involving all the nations in the world and estimated that 25 percent of all scientific papers include authors from multiple countries.

Some international collaborations are complex and massive. For example, the etiologic agent of severe acute respiratory syndrome (SARS) was identified with unprecedented speed in 2003 after the World Health Organization (WHO) assigned the task to a network of researchers...

When collaborative scientific projects expand across geographic boundaries, they introduce a new set of challenges, as culturally diverse individuals must share responsibilities.

However, when collaborative scientific projects expand across geographic boundaries, they introduce a new set of challenges, as culturally diverse individuals must share responsibilities. To navigate the increasingly global scientific landscape, researchers must maintain a level of “cultural competence,” or a balance of knowledge, attitudes, and skills required to manage interactions and relationships with individuals from different ethnic, racial, religious, geographic, and social groups.

The most important step in becoming culturally competent is to be self-aware. Self-awareness reveals one’s stereotypes, assumptions, values, beliefs, prejudices, and biases. As explained by Steven Spencer of the University of Waterloo and his colleagues in Annual Review of Psychology (67:415-37, 2016), “People experience stereotype threat when they are at risk of being judged or treated in light of a negative stereotype about one of their social identities.” The potentially negative effects of stereotype threat on the stigmatized racial and ethnic group or the individual include diminished motivation, aspirations, performance, and sense of belonging.

Once you recognize your own biases, there are many actions you can take to eliminate them. Try learning a language other than your native tongue. Learning another language affects one’s thought processes and perceptions and provides a means for self-reflection. In addition, you can expand your cultural knowledge by participating in cultural competence–themed conferences, workshops, and seminars, and by accessing web-based resources.

The importance of getting to know people from different racial and ethnic backgrounds cannot be overstated. By maintaining active professional relationships with colleagues from diverse cultural backgrounds, and by working in a culturally diverse environment, you can free yourself from stereotypes you may have formed and reduce explicit and automatic expressions of racial bias.

Beyond diversifying your experiences in your professional life, you could also make an effort to visit a country with different racial and ethnic composition from your own. Short-term immersion experiences with other cultures can improve self-awareness of one’s own culture, while increasing one’s appreciation of other cultures and fostering cultural empathy, consciousness, and flexibility (J Multicult Couns Devel, 43:244-61, 2015).

As worldwide collaboration becomes the norm, the need for culturally competent scientists is greater than ever. Gast was right when she wrote: “International diversity is just as important as diversity of discipline when it comes to scientific discovery.” It is the role of each scientist to advocate, encourage, and serve as a role model in cultural competence and foster a vibrant, peaceful, and mutually understanding global scientific community through connections and partnerships. The more culturally competent collaborating scientists are, the greater the outcome and impact of their research.

Ephraim M. Govere is the director of the Soil Research Cluster Laboratory at Pennsylvania State University.