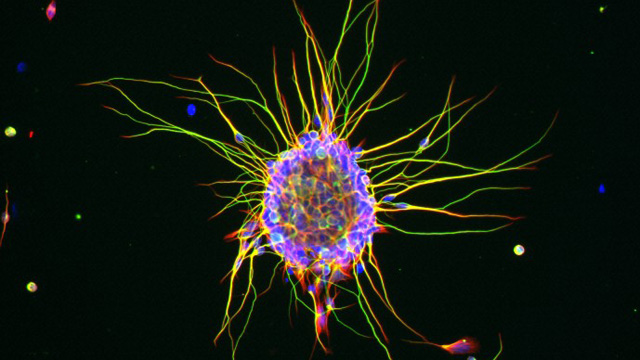 Science is all about prediction. Its power lies in the ability to make highly specific forecasts about the world. The traditional “hard” sciences, such as chemistry and physics, use mathematics as the basis of their predictive power. Biology sometimes uses math to predict small-scale phenomena, but the complexity of cells, tissues, and organisms does not lend itself to easy capture by equations.

Systems biologists have been struggling to develop new mathematical and computational approaches to begin moving biology from a mostly descriptive to a predictive science. To be most useful, these models need to tell us not only why different types of cells can behave in much the same way, but also why seemingly identical cells can behave so differently.

Cell biologists typically want to define the commonalities among cells, not the differences. To this end, experiments are...

Computational models of individual cells assume that the cell expresses specific activity levels of proteins or other molecules. Unfortunately, even within one cell type, the parameters and values used to build these models are almost always obtained from populations of cells in which each member has a slightly different composition. Variation in protein levels between cells gives rise to different responses, but if you are only measuring an average, you can’t tell whether all of the cells are responding halfway, or whether half of the cells are responding all the way.

The systems biology community is starting to recognize the problems associated with population-based measurements, and single-cell measurements are becoming more common. Although currently limited in the number of parameters that can be measured at once, such studies have provided insights into the extent to which seemingly identical cells can vary. Interestingly, studies of bacterial populations have shown that some processes are designed to vary wildly from one cell to another as a way for the microbe to “hedge its bets.” By trying out various survival strategies at once, a population can ensure that at least a fraction of its gene pool will survive an unexpected change in conditions.

Variations in the responses of cells within multicellular organisms are obviously under much tighter control than in free-living unicellular organisms, for no other reason than the need to precisely coordinate the behavior of cells during development. A rich area of current research in systems biology is how negative feedback loops can serve to reduce cell-cell variations and how a breakdown in the tight regulation of a cell’s response can lead to cancer and other diseases.

Despite the newfound appreciation for the need to consider cell-cell variations in building accurate models, more attention should be given to the network databases that serve as the foundation for these models. Unfortunately, data from different cell types are typically fed into those databases with no regard to their source. Models built from these amalgamated data sets result in a Frankenstein cell that could never actually exist. An oft-cited, large-scale signaling model for the EGF receptor pathway was assembled from bits of lymphocytes, fibroblasts, neurons, and epithelial cells. Yikes!

Using well-characterized model cell systems such as yeast to build predictive models is a good first step, but will not get us where we need to be with respect to predicting the drug response of cancer cells or understanding the mechanism of type 2 diabetes, because of the simplicity of the models’ intercellular interactions.

No one model system can be ideal for all problems in systems biology, but the current practice of pooling data from multiple types of cells to build specific models is absurd. We need to agree on a few well-characterized cell types to provide data for reference models. And we need to expect and embrace differences among cells—both between and within types—as revealing fundamental insights into the regulation of biological responses.