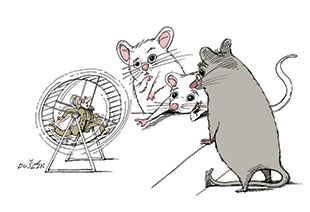 © DUSAN PETRICICLate last year, Steve Goldman of the University of Rochester and his colleagues reported that they had transplanted immature glial cells from donated human fetuses into the brains of immunodeficient mouse pups. These human glial cells matured into astrocytes and developed as the primary astrocyte population in the newborn mouse brain. One unexpected outcome of the team’s research, published in the Journal of Neuroscience (34:16153-61), was that these human-mouse chimeras outperformed normal mice almost fourfold in a variety of cognition tests, underscoring the importance of astrocytes in regulating synaptic plasticity and neural connectivity to enhance learning and memory. But the study also raised important ethical considerations—namely, what biological properties differentiate Homo sapiens from other organisms, and when should such “humanized” animals be afforded the rights that people currently enjoy.

Goldman is quick to state that the enhanced memory and learning performance of these human-mouse chimeras did...

At the same time, the team had ethical reservations about repeating these types of experiments on monkeys, presumably following the National Academies’ guidelines that no human embryonic stem cells should be introduced into nonhuman primates at any stage of fetal or postnatal development. Is there really an ethical difference in performing these experiments on mice as opposed to monkeys? The scientists have not addressed this question, perhaps because it is a difficult one to answer.

Human intelligence, as difficult as it is to define, is often thought to be one of the most important characteristics that differentiate Homo sapiens from all other organisms. However, the capacity to humanize animals has the potential to complicate this assessment of being human. For example, should the definition of human or humanlike intelligence be psychometric, based on a constellation of cognitive processes, or should it be neurophysiologic or neurogenetic because it is inextricably linked to the brain? The question of distinguishing human and nonhuman characteristics has arisen regarding our close primate relatives. Last October, a New York Appeals Court announced that it will consider the issue of whether chimpanzees are entitled to “legal personhood.” Similarly, in December, an appeals court in Argentina recognized orangutans as having basic legal rights, stating that these primates deserve living quarters in a sanctuary and not in a zoo.

Reconstituting human glial cells or neurons in animal brains could eventually impart complex cognitive behaviors, self-awareness, and/or other humanlike personality characteristics to these chimeras. Such research highlights the need for scientists and policymakers to resolve the question of how to define humanlike intelligence regarding the genetic or chimeric alteration of animals. While there is no clear answer to these questions, I advocate that intelligence is a valid criterion when considering what is humanlike or animal-like, and that scientists must develop both psychometric and neurophysiologic criteria in the definition of humanlike intelligence. Most importantly, we should not move forward on creating any human-animal brain chimeras before fully exploring the social and ethical implications of endowing nonhuman animals with humanlike personality characteristics.

While scientists and the public value technological development and discovery, such experiments should only be done under conditions where there are clear and important scientific benefits to be gleaned. Indeed, the scientific community must always consider the bioethical ramifications of emerging biotechnologies and remember that research investments in new discoveries should be assessed not by what we can do, but by what we should do.g

John D. Loike is the director of special programs at the Center for Bioethics, Columbia University College of Physicians and Surgeons.