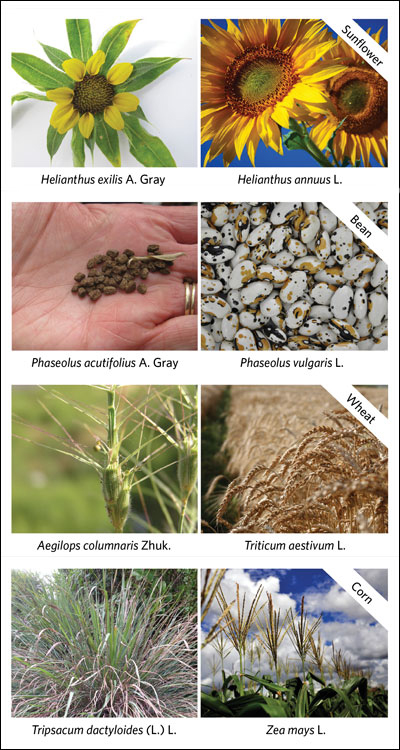 ALL IN THE FAMILY: Wild relatives (left) of important cultivated crops (right) are vital sources of genetic diversity for developing new crop varieties able to withstand challenges ranging from arable land restriction to climate change.Plants closely related to crop species, such as wild maize in Mexico and wild rice in West Africa, often happily grow in and around the disturbed soils of agricultural fields, passing their genes along to these crops with the help of wind and insects. Some traditional farmers even encourage such “weeds” because they recognize that their presence has a positive effect on their crops.

Modern, industrial farms no longer maintain this direct connection between domesticated and wild cousins, but plant breeders have found ways to take advantage of the genetic diversity found in wild relatives to develop new, hardier plant varieties. For a wide and growing range of food, fiber, industrial, ornamental, and other...

Wild relatives are exposed to myriad threats including habitat destruction, introduction of industrial agricultural practices, pollution, invasive species, and climate change. Due to a combination of these pressures, many unique populations of wild relatives of the world’s important crops, such as maize, peanut, potato, and cowpea, are becoming smaller and more fragmented.

Agricultural ecosystems too have a long list of serious challenges: limitations on productive land available for expansion and on natural resources such as water and phosphorus; the pressing need to conserve natural biodiversity and other ecosystem services while maintaining productivity; and increasing climate extremes and variability.

By 2050, the world population is projected to increase by at least 2 billion, and changing dietary expectations are creating demand for more energy-dense, resource-intensive foods. Over recent decades, diets around the world have become much more similar, coalescing around globally dominant cereals and oil crops. Although these dietary shifts have contributed to reducing hunger worldwide, they reinforce the evolution of our agricultural systems in the direction of ever greater homogeneity. This shift spawns concerns about genetic vulnerability to pests and diseases, as well as food system vulnerability due to climatic and political instability. The price of failure of any major crop variety is becoming increasingly higher.

How can we provide greater quantities of nutritious food, produced under more challenging agricultural conditions, with less energy, on the same amount of arable land, and in a more sustainable manner?

We know that a number of our major crops are particularly vulnerable to climate change, that their high productivity is based on the provision of substantial nonrenewable inputs, and that annual yield gains will fall short of projected needs. How can we provide greater quantities of nutritious food, produced under more challenging agricultural conditions, with less energy, on the same amount of arable land, and in a more sustainable manner? Much needs to be done, including increasing crop yields, reconsidering the allocation of arable land currently occupied by nonfood crops, and improving our agronomic practices to be ecologically efficient as well as productive in new environments—for instance, within urban landscapes and on marginal lands. Expanding food sources and minimizing food waste will also be necessary.

Plant genes both from old and new forms of cultivated varieties, and from crop wild relatives, are the primary sources of genetic potential for diversifying modern crops and for infusing them with traits that make them more productive, nutritious, and resilient. New tools and technologies have been developed that allow plant scientists to use ever more distantly related forms of wild plants in breeding efforts. Expanded efforts are needed to ensure that these resources are readily available to plant breeders and researchers in the future.

Conservation. Crop wild relatives remain largely uncataloged and therefore urgently require collecting for conservation. Complementary efforts to protect these species in their natural habitats are also important. Resources need to be devoted to researching appropriate methods for the conservation of wild genetic diversity. Gene banks that play an important global role in conserving and distributing plant genetic resources are in dire need of consistent funding.

Documentation. As genomic tools and technologies become increasingly powerful and inexpensive, the phenotypic characterization and evaluation of plant material is becoming the most significant constraint. The generation of useful phenotypic information is particularly challenging for crop wild relatives, as valuable traits, even for characteristics such as fruit size and color, are often masked in wild phenotypes. As the amount of genetic and phenotypic data increases, the development of information systems with direct links to the material conserved in the world’s germplasm repositories will be critical to breeding efforts.

Policy. In order for breeders to access the materials and information they need to diversify and improve crop varieties, national and international policy frameworks that govern such access need to recognize the global interconnectedness of food security and sustainable agriculture. Although it has been a decade since passage of the International Treaty on Plant Genetic Resources for Food and Agriculture, much remains to be done to form consensus and support for a global system of genetic resources exchange for the world’s important food crops and their wild relatives.

Preparation of genetic resources for distribution. In regions where adaptation to climate change is most urgent, crop breeders often lack the time and the resources required to work with traditional varieties, much less wild species, in order to select beneficial attributes for targeted introduction into new varieties. Support is needed for programs that tackle the initial challenge of crossing diverse genetic resources with standard crop varieties in order to create useful breeding lines that can be incorporated more easily into local and national breeding programs.

New tools and technologies have been developed that allow plant scientists to access ever more distantly related forms of wild plants for their use in breeding efforts. 

While there are many uncertainties about the future of agriculture in the coming decades, one thing that we do know is that the conservation, exploration, and use of the genetic diversity underlying agricultural production represents a critical piece of our collective global potential for sustainable productivity and increased crop quality. These activities are relatively inexpensive, and yet remain grossly underfunded. (See “Food for Thought,” The Scientist, June 2012.) As scientists we can play a vital role in pushing for further support for this research, in order to give our crops the diversity they increasingly need.

Colin K. Khoury is a research scientist at the International Center for Tropical Agriculture (CIAT) in Cali, Colombia, where he studies the sustainability of food systems through the conservation and use of genetic diversity. Hannes Dempewolf is a scientist at the Global Crop Diversity Trust in Bonn, Germany, who focuses on collecting, protecting, and preparing crop wild relatives for potential contributions to climate change adaptation. Nora Castañeda-Álvarez is also a researcher at CIAT, where she studies the distribution of, threats to, and conservation concerns for plant genetic resources, particularly crop wild relatives.