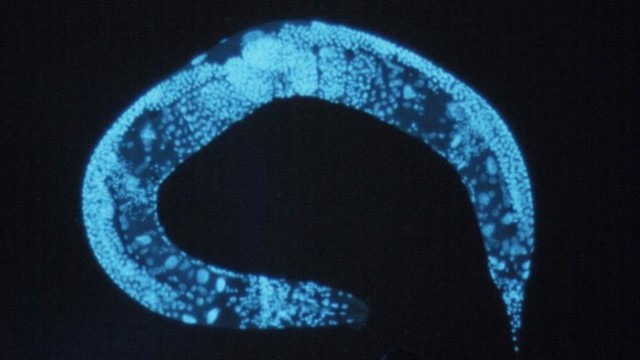 WIKIMEDIA, NIHMice, like any other animal, do not age gracefully—they lose weight, move less, and their coats become patchy. But mice of a particular strain in Daniel Kalman's lab at Emory University School of Medicine ward off these declines. The secret, Kalman has found, is in the animals’ guts.

In a study published in PNAS this week, Kalman and colleagues show that indole, a molecule produced by commensal bacteria, extends “healthspan” not only in mice but in the nematode worm Caenorhabditis elegans and in fruit flies as well. Taking away the bacterial production of the molecule ablated these anti-aging gains.

Healthspan—the time before age-related infirmities strike—is tightly correlated with lifespan. Yet, “aging research for a long time has examined lifespan without examining the effect on health,” says Heidi Tissenbaum of the University of Massachusetts Medical School who was not involved in the work. “This study is pushing...

Indoles serve as molecular messengers between bacteria and other species, controlling various aspects of bacterial physiology such as biofilm and spore formation and virulence. “Indoles are likely only one of many classes of molecules used by commensal bacteria and plants to communicate with us,” says Kalman. “Indoles have similar functions in animals from diverse phyla separated by hundreds of millions of years of evolution.”

Over 17 years of experiments with C. elegans, Kalman and his group have observed that indoles secreted by bacteria induce protection against stressors in the worms. “We had been looking for some time at how indoles regulate stress sensitivity, which is part of health span,” writes Kalman in an email to The Scientist. The authors also wanted to test whether indoles affect other aspects of healthspan such as fecundity, motility, and survival.

So Kalman and his team used antibiotics to wipe out naturally occurring gut microbes in C. elegans, and raised the worms in cultures containing a strain of Escherichia coli that can colonize the gut and synthesize indoles at greater amounts than other strains. Other animals were grown on E.coli that could not make indoles.

The indoles from E. coli did not significantly increase the lifespan of the worm, but the aged C. elegans showed “thrashing motility” comparable to that of a younger worm. The indole-supplied nematode could also eat bigger meals than its deprived counterparts because its pharyngeal muscles—the muscles that take in food in nematodes—functioned without a hitch, unlike the weakened muscles in normal aged worms.

The authors also found that indoles triggered the expression of a “distinct set of healthspan genes” in C. elegans. The gene expression profile in nematodes grown with indole-producing E. coli was more similar to a typical young C. elegans, rather than a normal aged worm. Indoles also induced genes associated with egg production in older C. elegans, extending reproductive age.

“The study is statistically extremely robust,” says Dario Valenzano of the Max Planck Institute for Biology of Ageing. “The paper convincingly shows that the lack of indoles is detrimental to healthspan. What will be interesting is to see if the same effect holds good with wild-type animals treated [extraneously] with indoles.”

In both C. elegans and D. melanogaster, indole functions by binding to the AHR (aryl hydrocarbon receptor), a transcription factor with a variety of organ-specific functions. “The AHR recognizes a diverse array of molecules, not just indoles,” says Kalman. “[The] evolution of variants is likely selected for by the particular molecules an organism encounters.”

The human body has a variant of the AHR. In humans and other mammals, indoles absorbed from plant dietary sources, or produced by intestinal microbiota through catalysis of dietary tryprophan, are found in small quantities all over the body. In mice, they have been shown to limit the virulence of pathogenic bacteria and protect the intestinal lining.

Molecules such as indoles that affect healthspan and help the body cope with stressors could potentially serve as therapeutics to help treat various maladies. They could also act as indicators of body health, and may find use in predicting and diagnosing gut-related disease, says Kalman.

That said, “it is a long road to go from the data we present to a drug,” he cautions. “That takes careful development, testing, and safety and efficacy trials.”