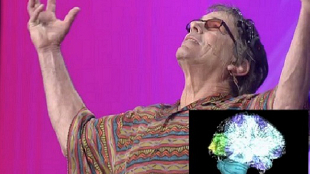 Mickey Hart watches rhythms pulse through his brainThis September, Grateful Dead drummer Mickey Hart exposed his brain to a live audience at the annual meeting of the American Association of Retired Persons (AARP) in New Orleans, Louisiana. With an electroencephalography (EEG) device strapped to his head, Hart strutted across the stage, drum in hand, as images of the rhythms pulsing through his brain were projected on big screens at the front of the hall. “It was like taking my brain out of my skull and watching it dance,” he says.

The stunt was the result of a collaboration between Hart and Adam Gazzaley, a neuroscientist at the University of California, San Francisco. Brought together by their shared interest in the power of rhythm, the duo says they hope to generate new research into its role in higher-order brain functions—and find ways to influence brain rhythms to improve cognitive...

“Mickey had an experience several years ago with his grandmother, who had Alzheimer’s,” says Gazzaley. “He noticed she was most communicative when he played the drums. It hit home that music and rhythm could have therapeutic impact, something he’d suspected for a long time.” So the AARP put Hart in touch with Gazzaley, who studies how brain rhythms change with normal ageing and disease, to help raise funds for research designed to explore the science behind Hart's observation.

“We’re going after the rhythm code,” Hart says. “If we crack it, we may be able to use that information to diagnose and treat these brain diseases. That’s the big enchilada!”

Researchers have recorded rhythmic fluctuations of electrical activity in the brain since the 1920s, but these “brain waves” were not thought to be involved in higher cognitive abilities. Over the last 20 years, however, scientists have found that brain rhythms are correlated with various cognitive phenomena. Rhythm is now known to have a critical influence on perception, attention, working memory, learning and language, says Gazzaley.

In a 2007 study, Pascal Fries, a neuroscientist at the Ernst Strungmann Institute in Frankfurt, Germany, demonstrated that different neuronal groups only communicate effectively with one another when their rhythms of electrical activity are synchronised. When rhythms are "phase-locked" between neurons in distinct brain areas, memories are made and tasks are completed more efficiently. “This doesn’t mean synaptic transmission and standard ways of communication between neurons are not important,” says Gazzaley. “But there is another layer of communication through rhythm that we now appreciate is a very powerful determinant of our behavior.”

Now Gazzaley wants to determine if brain rhythms vary between healthy individuals and, more importantly, exactly what role these dynamics play in cognitive decline and disorders like Alzheimer’s and Parkinson’s, where problems with rhythm have been implicated. But he also wants to investigate ways to influence brain rhythms to improve cognitive health. “Once we understand the role of rhythm in the brain—and we have a long way to go—what are the potential interventions to them change them to more optimal states?”

“It’s an interesting project,” says György Buzsáki, a neuroscientist at New York University who studies brain rhythms. “Of course, they are not the only people looking into these areas, but it’s always nice when artists and musicians get interested and involved in neuroscience.”

Gazzaley’s lab has already used video games to change brain rhythms in older people in order to improve their performance in high-interference environments. And earlier this year Buszaki’s group showed that they could reduce seizures in rodent models of epilepsy by using neurofeedback—in which currents are applied to the skull to create a closed feedback loop—to interfere with “ripple” rhythms in the hippocampus. “We can impose rhythms from the outside to make things better a little bit,” says Buzsáki.

Gazzaley and Hart also say they hope to investigate the evocative idea that rhythm training and musical intervention might arrest the worst effects of cognitive ageing and even ward off neurodegenerative diseases. “I think one day rhythmic entrainment and music could be legitimate medicines,” Hart says. There is zero evidence for this at the moment, adds Buzsáki, but however you do it, interfering with rhythms is “definitely something worth looking at.”