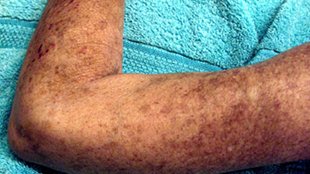 Skin lesions on the arm of a patient with sclerodermaWIKIMEDIA, AVMThe immune system’s attempts to eradicate cancer may inadvertently lead to autoimmunity, according to a report published today (December 5) in Science. At least, that appears to be the case for the autoimmune disease scleroderma. Scientists have found that antibodies produced by the body to recognize a mutant protein in tumor cells also recognize the protein’s normal counterpart, and can cause damage to healthy tissues.

“This work provides evidence for a theory of the disease [scleroderma] that is quite off-the-beaten-track and unexpected,” said David Botstein, a professor of genomics at Princeton University, who was not involved in the work. “This has got to be seen, despite the amount of effort involved, as a preliminary result,” he stressed, “but at the same time, I think the idea has major implications not only for scleroderma but also for...

Scleroderma is an autoimmune disorder that tends to afflict middle-aged and older adults and is characterized by fibrosis of the skin and other major organs, including lungs, muscle, blood vessels, and kidneys. The fibrosis is driven by autoantibodies that recognize one of three ubiquitously expressed proteins—RNA polymerase III subunit A (RPC1), topoisomerase 1, and centromere protein B.

But “there had been this tantalizing association with cancer,” said Antony Rosen a professor of medicine at Johns Hopkins University in Baltimore who led the study. Until recently, this “tantalizing association” had been largely based on anecdotal case reports, said Rosen. But in 2010, an in-depth study revealed that for those patients carrying RPC1 autoantibodies, the link with cancer “was very striking,” he said.

Also in that study, tumors from RPC1 antibody-carrying patients exhibited unusually high expression levels of RPC1 protein, Rosen added. “The simplest explanation for what we were observing was that the antigen in the tumor was initiating and driving the immune response.”

To investigate this theory, the team have now performed DNA sequencing on tumors taken from scleroderma patients with RPC1 antibodies, and discovered that the tumors contained mutant RPC1 proteins. “It was like a home run,” said Rosen, “like, man, can that be right?”

Next, the team tested these patients’ blood serums, and found that their antibodies reacted not only with the corresponding mutant RPC1 proteins, but also with normal RPC1, confirming a cross-reactive immune response. In one of the patients the researchers even found T cells that recognized both the mutant and wild-type proteins.  Together, the results “imply that the cross over to normal tissue is probably initiated by the mutation,” said Rosen.

That scleroderma might be primarily driven by cancer rather than immune-driven may alter future treatment strategies, Rosen added.  “Our current concept of the disease [scleroderma] is that we are trying to treat an overactive immune system which is damaging tissues, but perhaps the immune system is doing what the immune system needs to do which is to control cancer,” he said.

Indeed, “the study provides still more evidence that immune regulation and immune surveillance of cancer are important processes,” said Tyler Jacks, who is director of the Koch Institute for Integrative Cancer Research at the Massachusetts Institute of Technology, and was not involved in the work.

Further, Jacks said, “it certainly seems reasonable that cancer could be the cause of other autoimmune disorders.” In the case of scleroderma, the link with cancer is robust, he said, but even in autoimmune disorders where a link is not obvious there may be one. For example, “there could be an occult tumor”—where the tumor is undetectable—he suggested.