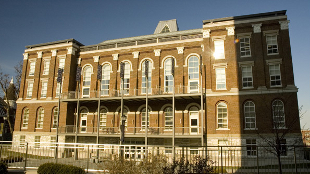 The Main Building at the University of Kentucky Wikimedia, SeicerFederal investigators have censured a former University of Kentucky (UK) senior biomedical researcher for serial scientific misconduct over a 10-year period, including the falsification of data in grant applications, progress reports, and published papers. The US Office of Research Integrity (ORI) announced the findings last week (November 20) with a notice in the Federal Register.

A joint investigation carried out over the course of 2 years by the ORI and the UK found that Eric Smart, who studied the molecular mechanisms behind cardiovascular diseases and diabetes, had falsified or fabricated a total of 45 figures—mostly images of Western blots, a technique used to identify proteins—in seven grant applications, three progress reports, and 10 published papers, some of which were cited more than 100 times, according to Thomson Scientific’s Web of Knowledge. The notice says that Smart also reported experimental data...

“This is surprising and disappointing news to me,” said Philippe Frank of Thomas Jefferson University in Philadelphia. “Dr. Smart's papers were highly cited in the specific caveolae/cardiovascular research field.” William Sessa of the Yale University School of Medicine told The Scientist by email that he was “shocked at the extent of misconduct,” and that the reporting of data for knockout mice that did not exist in grant applications “is very problematic indeed.” But, he added, “since I do not know what aspects of the figures were incorrect or misrepresented, it is difficult to assess the impact on the field.”

Smart did his PhD at UK and was awarded an endowed chair in 2003. His research brought in $8 million in federal grants, according to the UK, mostly from National Institutes of Health agencies such as the National Heart, Lung, and Blood Institute and the National Institute of Diabetes and Digestive and Kidney Diseases. Smart, who resigned from his position shortly after the first round of investigations was complete in May 2011, was not available for comment but the Kentucky newspaper Lexington Herald Leader reported that he is now working as a chemistry teacher in a local school.

As a result of the investigation, the UK recommended that the 10 affected papers be corrected or retracted, though the Journal of Biochemistry and the American Journal of Physiology-Cell Physiology, which published the bulk of the papers in question, did not return emails and calls seeking comment. For his part, Smart has agreed to exclude himself from federal grant applications for the next 7 years—longer than the typical 3- or 5-year bans.

As for the 13 researchers previously employed in Smart’s lab, William Thro, general counsel for UK, said they “have moved on to other projects and endeavors.” And, he noted, “to my knowledge there has been no request for the return of funds to the federal government and other agencies.”