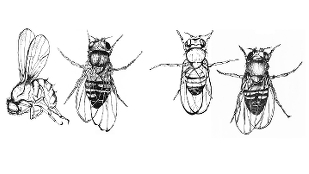 IMAGINAL DISC PRODUCTIONSIn 2004, just as he was starting out on his PhD in genetics at Rockefeller University, New York, Alexis Gambis heard about the Fly Room—a cramped office space at nearby Columbia University where, in the early part of the 20th century, Thomas Hunt Morgan and his protégés reared thousands of fruit flies as part of the experiments that led to the discovery of how genes are arranged on chromosomes and how they encode specific traits. In the process, the researchers established the scientific basis for the modern study of genetics.

The work, borne of an egalitarian atmosphere cultivated by Morgan, who encouraged his students to contribute on equal footing, won a Nobel Prize in 1933. “It’s an iconic lab where most of the early discoveries in genetics were made,” says Gambis, who himself worked with fruit flies for his research until he left the lab a...

It was a scene bursting with cinematic potential. And now, almost 10 years after learning of the Fly Room, Gambis has just wrapped shooting for a movie based on the famous lab. This is no straight-up documentary, though. The Fly Room is a feature film charting the evolution of the complicated relationship between one of Morgan’s best students, Calvin Bridges, and his 10-year-old daughter, Betsey.

Told through Betsey’s eyes, the film depicts the day in 1927 when she visited her father at the Fly Room. There, Betsey bonds with her father over their shared curiosity about mutant flies, only to make a troubling discovery of her own. “It’s a personal tale, but it will bring to life the one of the most important labs of the 20th century,” says Gambis, who wants to show that films that accurately portray scientists and the culture of science can be just as interesting as those about any others lives or cultures.

Gambis, 31, started making films in his spare time during his graduate studies. Fed up with inaccurate, overblown depictions of scientists as crazed misfits, he tried to redress the balance by making films about real scientists. In 2008, he founded the Imagine Science Film Festival, which runs in New York for one week every year, to promote the understanding of science through visual storytelling.

He began developing the idea for The Fly Room while working toward a Masters in film at New York University. “I didn’t want to make a traditional science film or a biopic, I wanted to make a drama with a scientific flavor,” he says. “So I focused on Calvin Bridges. He was this brilliant geneticist, but he was also bit of a James Dean type, who was known for being a womanizer.” Bridges was known to frequent brothels and had several affairs. (According to Gambis, when Bridges died of syphilis in 1938, his colleagues burned the notebook that contained his personal diaries in an attempt to protect his legacy.) 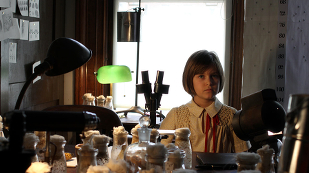 Betsey Bridges, played by Zoe Brooks, in the Fly Room at Columbia, where her father studied geneticsIMAGINAL DISC PRODUCTIONS“I was interested in his character and the interplay between his work in the lab and his personal life,” says Gambis. Then he found out that Bridges’ daughter, Betsey, is still alive. Gambis interviewed Betsey, now aged 95, several times and the story grew out of what she revealed about her relationship with Bridges.

“She didn’t really know him, and she felt uncomfortable around him,” says Gambis. “She told me she went to the fly room once when she was 10 years old and described her day there in a lot of detail. That became the basis of the film.”

The film revisits Betsey at the age of 25, when she hears about her father’s death, and again at 93, with footage of the real Betsey reflecting on her memories.

Once Gambis had secured funding for the project, he got set designers to create an exact replica of the original Fly Room at a warehouse-turned-studio-space in Brooklyn, where most of the filming took place. The filmmaker recruited first-time actress Zoe Brooks to play Betsey and professional actors for the role of Bridges and others, but he also managed to persuade several eminent biologists to play key roles. For example, Rockefeller’s Leslie Vosshall plays Edith Wallace, the in-house illustrator who produced detailed ink paintings of mutant flies, and Columbia University’s Stuart Firestein became Thomas Hunt Morgan.

“I already knew Alexis, and I liked the angle he came up with because I think it’s a great way to portray scientists and the culture of science in a realistic but engaging way, so I was happy to get involved,” says Firestein, who was not a total stranger to acting, having worked in the theatre for 15 years before becoming a scientist. “And I got to play one my scientific heroes, doing very Morgan-like things like squishing non-mutant flies with my thumb, so it was immense fun.”

Gambis and his team completed filming earlier this month and are now in the process of editing. When The Fly Room is completed, likely in early 2014, Gambis plans to enter it into the Cannes Film Festival and other competitions. “It’s not supposed to be a niche film,” he explains. “We’re hoping for wide public release.”

In the meantime, the Fly Room replica in Brooklyn has been transformed into an exhibition, which opens on July 24th, where visitors can explore the lab and learn about genetics through audio and video installations. The new Fly Room will also host a series of lectures about genetics and the importance of fruit flies as model organisms, delivered by New York-based scientists. “It’s a hotspot for raising awareness about the history of genetics and fruit fly work,” Gambis says. “It’s like stepping back in time; it’s pretty spectacular.”