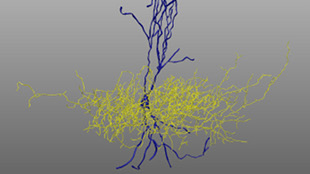 A neuron affected by an NL3 mutation.NEURON, FOLDY ET AL.Two autism-related mutations in a synapse-adhesion protein lead to deficits in prolonged endocannabinoid signaling in mice. It’s a surprising connection that suggests such signaling problems could be implicated in autism spectrum disorders, according to a paper published today (April 11) in Neuron.

“It’s a very stimulating finding which could be a real turning point in understanding tonic endocannabinoids and how this otherwise mysterious lipid signaling really works,” said Bradley Alger, a neuroscientist at the University of Maryland School of Medicine who was not involved in the study. But he warned that the paper, while tantalizing, did not even...

The researchers studied two mutations in neuroligin-3 (NL3), a gene encoding a protein involved in building and maintaining synapses. One mutation is a deletion of the entire gene, while the other, called R451, involves a single amino acid substitution. “These two mutations both have been associated with autism in humans,” said coauthor Thomas Südhof, a cellular physiologist at Stanford University.

Südhof and colleagues sought to understand what physiological effects the mutations had in common, assuming that if they could find a shared effect it might explain how they both led to autism. Using mice with each of the mutations, they made electrophysiological recordings of the interactions between pairs of cells in the hippocampal areas of the mouse brains. They compared recordings in the two types of mutant mouse brain cells to recordings done in normal mouse brains.

While synaptic changes often differed depending on the mutation, one type of cell containing cannabinoid type-1 (CB1) receptors showed similar alterations in its patterns of excitation for both types of mutant mice. Further investigation showed that tonic endocannabinoid signaling had been disrupted in these cells. “By this comparative physiology we were able to point out differences that pointed to this endocannabinoid signaling,” said Csaba Földy, also a cell physiologist at Stanford and an author of the paper.

Alger added that, if the endocannabinoid system does turn out to be connected to autism in humans, medical marijuana could turn out to hold possibility for treating autism. But Südhof said that he did not know at this point whether marijuana would intensify or ameliorate autistic symptoms.

More immediately, said Alger, the findings will spur research into NL3 and other neuroligins, molecules he had never dreamed might have an effect on endocannabinoid signaling.  “We’re really just starting to understand how this works,” he said. “In terms of autism, we’ll have to refer to future research.”